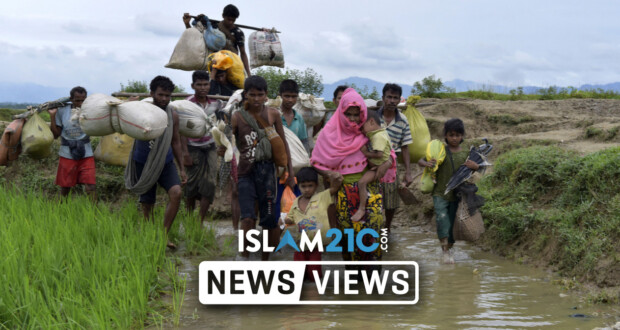 25th August 2017 – the day the Myanmar military launched a deadly crackdown on our Rohingya brothers and sisters living in Rakhine State. Many tens of thousands were raped, maimed, killed, and had their homes burnt to the ground. This ethnic cleansing campaign, orchestrated by the Myanmar government and Aung San Suu Kyi, has seen more than 740,000 people flee to neighbouring Bangladesh. [1]

Three years on, there is no sign of reprieve for the Rohingya. Reports have emerged of gang violence in camps that were designed to be a safe place for refugees temporarily housed until better conditions could be made available. The presence of gangs in these camps is testament to the desperation of the situation. One refugee narrated the following harrowing account:

Although the Bangladeshi people have been mostly welcoming and understanding of the extreme difficulties faced by the Rohingya, they too have their limits.

Bangladesh, a developing country with its own challenges with poverty, is finding it tough to keep refugee camps open and has attempted to arrange a repatriation agreement with Myanmar three times. In November 2017, the two countries attempted to sign such a deal [3]. In November 2018, Bangladesh arranged for trucks and buses ready to carry refugees back to Myanmar, but nobody wanted to board the vehicles [4]. In July 2019, Myanmar officials went to the camps to discuss repatriation. Again, nobody was going to be fooled by empty promises that conditions would somehow be adequate on their return. [5]

The plight of the Rohingya is one with a long history, having been persistently persecuted since at least 1978 when “Operation Dragon King” was undertaken by the Myanmar military. That year saw the first refugees entering Bangladesh, and there have been numerous times subsequently where the government of Myanmar has attempted to push greater numbers of Rohingya out of its borders. Various “operations” by the military have seen successive large groups of Rohingya flee to Bangladesh, with “Operation Clean and Beautiful Nation” taking place in 1991-1992, and the most recent being documented from 2017 to date. [6]

The Myanmar government continues to deny it has committed genocide against the Rohingya, while numerous countries have clearly stated that its actions amount to the same, with people being tortured and killed for no reason other than their religion. It is an outrageous but sad truth.

Human Rights Watch reported [7] earlier this week that people are being beaten and killed if they attempt to leave the detention camps set up by the Myanmar government. The Rohingya people are trapped, whatever they do. Leaving means being killed, but staying means they will also be killed through their mistreatment.

Truly, Allāh tests those whom He loves. The pain of the Rohingya will never be in vain. The wider Muslim community shares this pain, as we will always be one unified body. May Allāh provide the Rohingya people with the strength to endure this ongoing worldly test, and may He compensate them with Paradise for their steadfastness.

2020-10-09
Shaheer Choudhury
Previous: One God Many Names | Al-Samīʿ (The Ever Hearing) and Al-Baṣir (The Ever Seeing)
Next: Parable of the Hypocrites