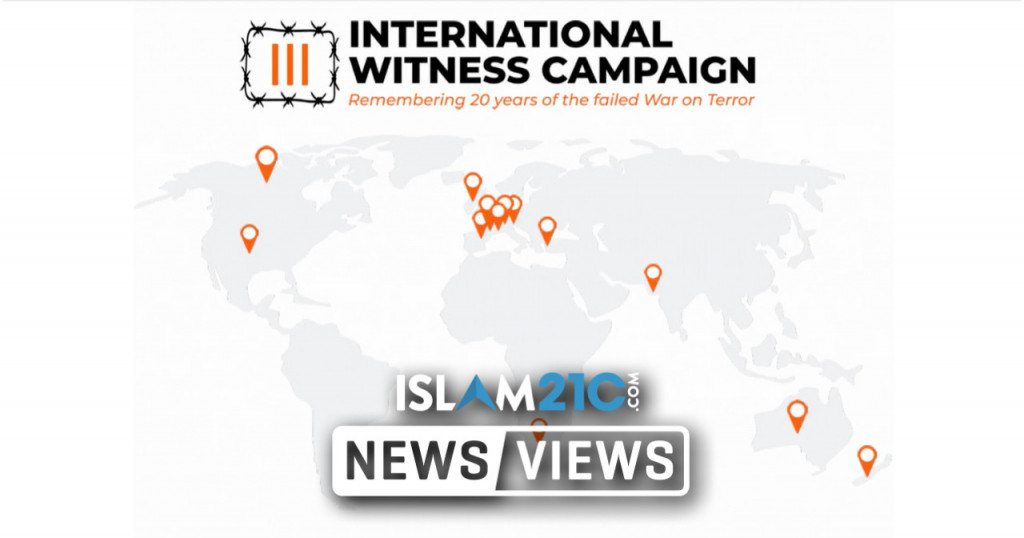 The West’s disastrous War on Terror consisted of two decades of occupation in Afghanistan and further incursions in numerous Muslim countries around the world. As a result of this brutal conflict, the human rights advocacy organisation CAGE has announced the launch of the International Witness Campaign. The campaign is a multifaceted five-month long operation that seeks to commemorate twenty years since the so-called War on Terror was launched by the US and its allies. It will also highlight the sheer devastation and loss of human life caused by the manufactured conflict. [1] [2]

On the day the last troops leave Afghanistan, a global coalition of 40+ NGOs have launched:

In its press release, the managing director of CAGE, Muhammad Rabbani, delivered the following statement:

“We are proud to launch the International Witness Campaign alongside our global partners. This is a poignant moment to reflect over the devastation the War on Terror has caused over the last two decades.

“All efforts to move forward must centre justice for survivors, accountability for the perpetrators and proceed with the dismantlement of the entire infrastructure of laws, policies and rhetoric that justified and prop up the War on Terror industry.” [1]

The collaborative movement comprises the joint efforts of 47 partner organisations, which include the Belgium-based Collectif Contre l’Islamophobie En Europe (CCIE); the Islamic Council of Victoria, Australia; the US-based Center for Constitutional Rights; and Spain’s Asociación Musulmana por los Derechos Humanos (AMDEH). Through upcoming events, the International Witness Campaign is set to remember the lives of those affected by the cruel actions taken by America, Britain, and their military allies since 2001. [3]

Rare to see this level of cooperation within civil society, but it tells you a lot of the impact of the War on Terror that over 40 orgs have joined to launch the International Witness Campaign. Very proud of the team at @UK_CAGE for their work on this: https://t.co/snTQC3HPMN pic.twitter.com/JfgX9P7wyh

Mansoor Adayfi, a former Guantanamo Bay prisoner of 15 years, currently presides as the Guantanamo Project Coordinator at CAGE. Regarding the upcoming campaign, he made the following statement:

“Since my release from Guantanamo Bay, where I spent nearly 15 years without charge or trial, I have been advocating for its closure and for an end to the hostility that gave birth to Guantanamo. Those responsible for the lost years of my life must also be brought to account.

“I always believed peace can be achieved through dialogue and that justice can only happen if perpetrators are accounted. The international witness campaign comes at the perfect time to amplify this message on a global level.” [1]

The War on Terror, also known as “The Global War on Terrorism” and “The Forever War”, was launched by the US under the first Bush administration. Its objective was to counter what it claimed was the existence of extremist Muslim groups around the globe. The US sought to punish armed organisations such as al-Qaeda and the Taliban after the September 11 attacks, which took the lives of just under 3,000 civilians. This tragedy was used as a pretext to begin a murderous spree of military operations that have yet to cease.

The so-called “War on Terror” led to the invasion of Afghanistan in October 2001; drone strikes on Yemen from 2002; and the invasion of Iraq in March 2003. From 2004 to 2020, The Bureau of Investigative Journalism notes that there have been 336 “minimum confirmed strikes” with the use of armed drones in Yemen. These strikes have tragically killed approximately 1,300 people. [4] Since the US invasion of Iraq in 2003, there have been at least 200,000 violent civilian deaths, according to the Iraq Body Count. [5] And according to research undertaken by the Watson Institute for International and Public Affairs, since 2001 there have been at least 71,000 civilian deaths in Afghanistan and Pakistan. [6]

CAGE’s press release further notes the “pernicious rhetoric” of the War on Terror, blasting the US and its allies for how support for the war was based on the “demonising” of Islam.

“The pernicious rhetoric of the War on Terror has become a global phenomenon. The architects garnered public support by demonising Islam and constructed a framework of laws and policies that perpetrated injustice on an unprecedented scale against Muslim populations. The infrastructure of hate was then used to suppress dissenting voices and erode civil liberties for all. The surveillance state, securitisation and erosion of the rule of law are manifestations of the toxic campaign.

“At the heart of the initiative stand the millions of people affected across the globe and the voices of survivors of the abuses. It will seek to chart the globalisation of the War on Terror, in the context of solidarity, justice and dialogue.” [1]