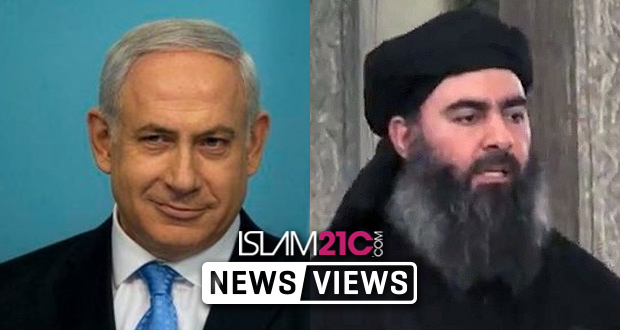 The Zionist state might cooperate with the notorious cult, Daesh, a report published by Meir Amit Intelligence and Terrorism Information Center (ITIC) suggested, as reported by Yeni Safak. ITIC is known for its close ties with the Zionist state’s ‘intelligence’ agencies. [1]

A relationship of convenience?

Observers have long pointed out common traits between the two self-proclaimed states—one claiming to be an ‘Islamic’ state and the other a ‘Jewish’ state. Both are known to cause extensive damages—including the murdering of civilians [2]—in the regions that they occupy illegally according to International Law.

Just months ago, the Zionist state ‘forgave’ Daesh for their accidental attack, the Zionist Defence Minister confirmed.[3] This added to existing speculation as to why the Israel Defense Forces (IDF) have not targeted Daesh whilst it has carried out attacks against other factions fighting in the ongoing war in Syria.

This ITIC report, however, might be the beginning of an official and public relationship, co-operation, and even financing of the terrorist organisation through the reviled “state”.

The report suggests that the Zionist state might begin cooperating—if it has not already—with Daesh, to decrease Iranian presence in Syria.

This information surfaced online amidst the US administration claiming to have ‘defeated’ Daesh in Syria, after leaving a serious amount of damage to the civilian population.[5] The US’s co-operation with an offshoot of the PKK terrorist organisation—PYD/YPG/SDF—to ‘defeat’ Deash came at a cost. Aerial bombardment of Syrian cities has claimed numerous civilian casualties. [6]

PKK, a Kurdish militant group, is known to cause mass exodus of civilians, [7] from the areas that they ‘liberate’, and are often portrayed by many media outlets as ‘volunteer fighters against Daesh’ as opposed to the ‘terrorist’ label on foreign fighters, [8] despite numerous accounts of collusion between the two terrorist organisations for their own hegemony. [9]

The Turkish presidential spokesman, Ibrahim Kalin, alluded to the objectification of women by PKK to ‘romanticize’ their terrorism. Referring to the portrayal of PKK terrorist women in the western media, he said:

“[It is] a useful instrument to sell propaganda to Western audiences, but an affront to the female body and personality.” [10]

What does this mean for the Civilians?

As in the past, the civilians and the indigenous people of these regions would be at higher risk for their lives and their livelihoods whilst various factions—whom they did not elect—attempt to decide their future. With dishonest and unreliable players, to say the least, such as Iran, Israel, PKK and its offshoots (PYD, YPG, SDF), Daesh, US, Hezbollah, Russia and the Syrian regime, all trying to exploit the dire situation of the region for their own hegemony, the interests of those mostly affected may fall of deaf ears, despite numerous violations of their basic rights.

A Second or Extended Zionist state?

Another report, last month, suggested that there are plans to divide Syria and Iraq into seven ‘boutique states’. A large portion of which was reserved, for the ‘Shi’ites’ and the ‘Alawites’, leaving the ‘Sunnis’ in a land-locked region that would have to severely rely on its imposed neighbours. The report also pointed out a region as ‘Israel’. 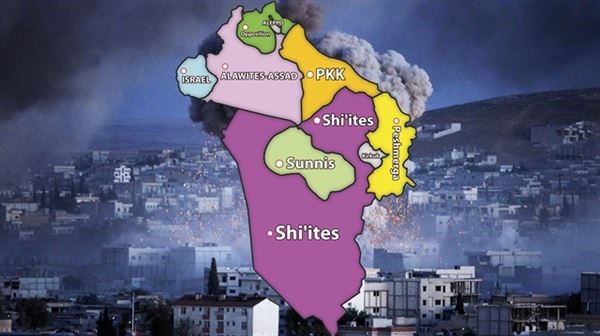 The report is said to be based on a conversation with officials from the US State Department and Pentagon and that this plan might be implemented as early as the second half of 2018. [12]

There have been many similar suggestions in the past, Imran Garda, went ‘Off Script’ on TRT World to rebut these malicious suggestions.