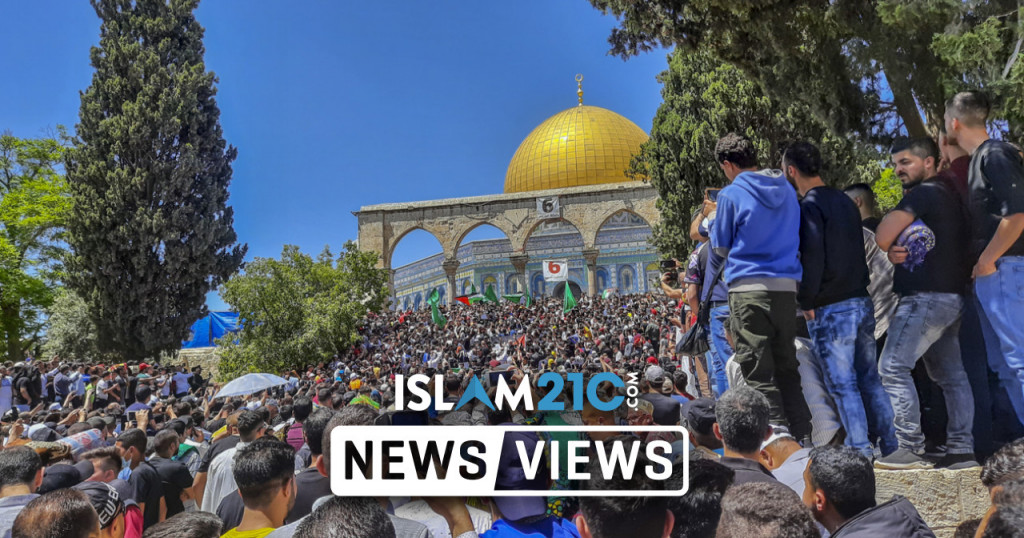 Al-Aqsa Mosque was stormed for the third consecutive time on Monday night following pitched battles the day before that saw hundreds injured.[1] The ancient sacred site was stormed by heavily-armed Israeli police fully clad in riot gear, turning what should be a sacred place of prayer into a battlefield. Whilst most Western media will characterise the Israeli assault on the mosque as a “clash”, there is no parity of arms; one side attacks with rubber-coated steel bullets, tear gas, and stun grenades under the cover provided by many in the international media, whilst the other side defends itself and its holy site with stones, video testimonies, and global pleas to the Divine.

Israeli forces stormed the Al-Aqsa Mosque earlier this week in preparation for the Jerusalem Day march in which right-wing Israelis traditionally parade through Arab parts of Jerusalem taunting and baiting Palestinian residents. In the face of universal condemnation, including uncharacteristically choice words from the US administration criticising Israel’s actions in Sheikh Jarrah, and international protests held across western cities such as London, Berlin, and Chicago, Prime Minister Netanyahu ordered a further incendiary raid on unarmed worshippers in Al-Aqsa Mosque in an effort to appease his extremist base.

Al-Aqsa Mosque was stormed and worshippers were attacked whilst extremist Israeli settlers were seen singing and dancing beneath a tent that flew the Israeli flag in full view of the homes of Palestinians threatened with forcible eviction.[2]

In a sign of global Muslim outrage, Pakistani celebrities such as Asim Azhar condemned Israel’s aggression against Al-Aqsa. “I am sickened and disgusted,” wrote Asim on Twitter, “How can you attack a place of worship and attack defenceless worshippers?” Former captain of Pakistan’s cricket team, Shahid Afridi, tweeted: “The global conscience is sleeping wrapped in a blanket of indifference. Perhaps the blood of Muslims is so disrespectful that no voice will be raised and no campaign will be launched.”[3]

Pope Francis also spoke out and said: “I invite everyone to seek shared solutions, so that the multi-religious and multi-cultural identity of the Holy City might be respected and that fraternity might prevail.”[4]

Following the distressing scenes in Al-Aqsa, protests have ignited across Palestine, which were met with a heavy-handed police response. Hamas, together with the resistance in Gaza, issued the right-wing Israeli government with a warning: cease the aggression and withdraw forces from Al-Aqsa Mosque, or face the consequences.

Israeli forces continued their aggression on unarmed worshippers, with video footage showing an unarmed man cowering on the floor in the foetal position while being stamped on by Israeli soldiers. At 6pm local time, Hamas began firing rockets into Israel claiming sustained Israeli aggression against worshippers at the Al-Aqsa Mosque and Sheikh Jarrah neighbourhood during the holy month of Ramaḍān, which ignited the most recent tensions.

In recent days, the Israeli military police has violently cracked down on protests in the Sheikh Jarrah neighbourhood, including in what would in any other city in the world be considered police brutality, reminiscent of the treatment meted out on the late George Floyd.

The right-wing Israeli government’s response was both predictable and deadly. Air raids followed indiscriminately, dropping bombs on Gaza. The current death toll stands at 28 Palestinians killed and 2 Israeli’s.  An Indian woman working in the country was also killed.  Scores more Palestinians have been injured.[5]

Gaza is one of the most densely packed regions in the world, so it came as no surprise that a series of Israeli air strikes killed scores of civilians, including nine children.[6] Eyewitness reports state that a man on a motorcycle (a suspected Hamas member) was riding through the civilian area when Israeli airstrikes targeted him twice.[7],[8] Two children also died in the Israeli air strike on the suspected armed group member.

“The children were playing with their cousins in front of the house when a man on a motorcycle passed by, and the occupation targeted him twice,” said Youssef al-Masri, the father of two of the children killed in the Israeli attack.[9]

The mourning father explained how his only children, Marwan aged 7 and Ibrahim aged 11, liked to play outside just before the iftar meal. The heart-broken father said: “My children were martyred. I cannot find any justification whatsoever for targeting someone passing through overcrowded civilian neighbourhoods where dozens of children usually play.”[10]

The extended al-Masri family lost five members that day, as further Israeli air strikes hit while families were preparing their iftar meal. Marwa al-Masri from another branch of the family said:

“I was coming back home from work when two explosions rocked the neighbourhood. The dust and the smell of blood and death filled the place in a moment, and children were bleeding on the side of the street.”

“I saw my cousin hugging her children and screaming. All of this happened in just one moment. I still cannot imagine that this happened.

“It makes my heart bleed. While people were preparing for their iftar in Ramadan, we were holding the coffins of our children killed in cold blood by the occupation.”

In response to attempts to justify the killing of children, political activist and artist Lowkey tweeted: “As a parent, to witness people who consider themselves extremely civilised and may even be parents themselves, justifying the killing of children trapped in an open-air prison, deeply hurts my soul. What wounds could have coarsened your senses to this extent?”

In a concerning sign of escalation on Tuesday, a newly formed organisation of armed groups in Gaza called the Joint Chamber of Military Operations for Palestinian Factions released a statement:

“As a part of operations, a military armoured vehicle belonging to the occupying forces in northern Gaza was hit and a rocket attack was carried out on Jerusalem.

“We have accumulated our military experience in a bid to defend our people, whom we will never abandon. Our weapon is the weapon of all our people.

“The time when the coward enemy can attack Al-Aqsa [Mosque] and Al-Quds without being held accountable is over.”[11]

In a sign that Netanyahu does indeed intend to increase the scale of the attacks, Israeli troops have been mobilised at the Gaza border and approximately 5000 reservists have been called up.  US President, Joe Biden, has called for de-escalation but there is little evidence that his call will be heeded.[13]