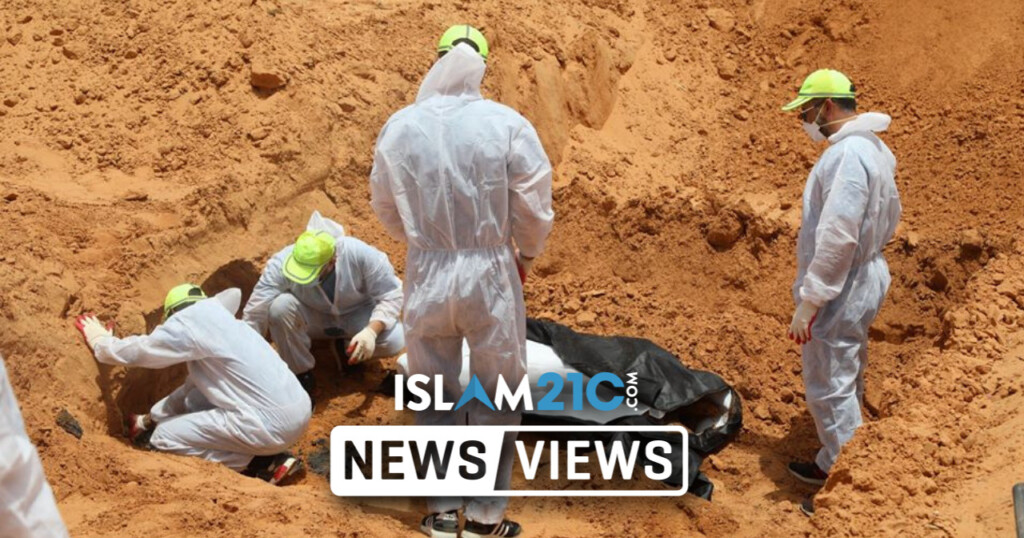 Libya’s internationally-recognised government, the Government of National Accord (GNA) has said it is gathering evidence of alleged war crimes committed by the ex-CIA asset and head of the so-called ‘Libyan National Army’ (LNA), Khalifa Haftar. [1] [2]

Several mass graves have recently been found in areas liberated from militias loyal to the brutal general, who has suffered heavy setbacks as the GNA regains control of key towns amid the recent capture of several Haftar strongholds. [3]

According to the Tripoli-based GNA most of the mass graves were found in Tarhuna, where many of the atrocities are said to have taken place. The city of Tarhuna was Haftar’s last remaining stronghold in north-western Libya, which was captured by GNA forces in early June. [4]

Tarhuna was a major supply base for Haftar’s militia and a launch pad for their attacks against Tripoli and other government-controlled areas. With this series of battlefield defeats, Tarhuna has imposed a major defeat to Haftar, collapsing his 14-month offensive on the capital Tripoli.

The United Nations Support Mission in Libya (UNSMIL) expressed “horror” at the discovery of the mass graves in an area retaken from Haftar in early June.

Most of the bodies showed signs of torture, according to Health Ministry spokesman Amin al-Hashemi. Haftar’s forces had also burned some prisoners in containers and buried tens of others alive in mass graves, the Libyan Interior Minister Fathi Bashagha revealed. Many others were thrown into a water well following execution carried out by Haftar’s militias.

This is not the first time Haftar has been accused of such crimes. The brutal military commander appears to be responsible for much of the chaos in the North African country and has allegedly instructed his soldiers to commit war crimes and atrocities. [5] Forces loyal to Haftar have carried out several cold-blooded killings and massacres of innocent civilians.[6]

The UN has also recently verified numerous summary executions at Tarhuna prison. In March, the UN expressed deep concern after receiving reports of hundreds of enforced disappearances, torture, killings, and displacement of entire families in Tarhuna by forces loyal to Haftar. [7]

Turkey’s foreign minister on Sunday said the Libyan government will agree to a ceasefire to end the conflict only if Haftar withdraws his forces from key regions across Libya. [8]

The GNA accepted an offer from Turkey for logistical and military support, which has been successfully resisting attacks and advancements as it seeks to deter inhumane offensives led by forces loyal to the renegade military commander Haftar. [9]

Haftar began a military assault in the Libyan capital Tripoli in early April last year in an attempt to capture the city from fighters loyal to Prime Minister Fayez al-Serraj’s GNA. [10]

In his pursuit to rule all of Libya, Haftar led military assaults across several cities within the country. Yet the UN-backed GNA has made steady progress in its campaign against the militias of the Benghazi-based warlord, destroying vital supply routes and infrastructure whilst gaining the support of local communities.

Libya has been in a state of anarchy since the NATO-backed overthrow of the long-time authoritarian ruler Muammar Gaddafi in 2011. The humanitarian situation in Libya has severely deteriorated since Haftar’s assault on the country, with scarce supplies of food and medicine running out. [11]