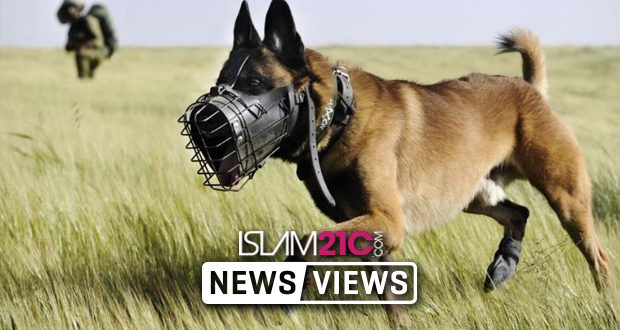 Mabrouk Jarrar, a Palestinian from the town of Burqin in the city of Jenin, has spoken out about when he was attacked by ferocious dogs belonging to Zionist occupation forces in a raid of his town and home earlier in the month.

Mabrouk and his family were awoken by loud explosions in the night as the forces blew up the entrance door of the building. [1] Mabrouk and his wife quickly rushed to get their two children to take haven in their own bedroom, thinking they would be safe from the well known brutality of the illegally occupying forces.

Following the explosion of the front door to family home, located on the second floor of the building, police dogs stormed in, guided by their owners who were reportedly hiding out of fear. [2]

A dog was then let loose into the bedroom where the family were hiding, and attacked Mabrouk. For seven long minutes Mabrouk, who is a freed Palestinian prisoner, tussled with the ferocious Zionist canine. He stated,

“I felt that my soul came out several times with every bite taken by this huge dog…He began biting my left arm and my left leg, not short of the criminality exacted by the occupation soldiers themselves who hiding behind walls with fear filling their hearts.”

The Zionist forces were reportedly petrified of finding the young man the whole raid and subsequent interrogation was designed to find, 23-year-old Ahmed Nasr Jarrar. Ahmed was a relative of Mabrouk’s, and was accused of attacking illegal settlers. He was later found hunted down and murdered by occupation forces days after the incident. [3]

Mabrouk tussled with the police dog and was dragged by its jaws down to the lower floor of the apartment where the scared Zionist soldiers were reportedly jumping over one another for cover. On seeing that their canine accomplice had drained the embattled Mabrouk, they lunged on him, beating him relentlessly on the face and afflicting on him bruises and fractures in his nose.

Mabrouk’s wife tried to defend him, only to be confronted by the dog. She immediately ran out of the apartment and screamed at the soldiers to come to his aid and to save her children from seeing a crime “that will forever haunt their memories.”

In her correspondence with the Palestinian Information Centre, she added,

“At first, the soldiers and the dog trainer simply spectated as my husband was attacked by the dog… when they concluded they would not find any information about Ahmad Jarrar with Mabrouk, they pounced on him and beat him before arresting him.”

Mabrouk was admitted to Afula Hospital to remedy the deep wounds as a result of the dog’s teeth that penetrated his body. There, he would spend his moments recollecting the moments his children were gasping in terror as they saw their father tossed and turned by a vicious dog after the material damage inflicted on their home.

Mabrouk was released after the killing of Ahmad Jarrar and was transferred to the Rafidya Hospital to continue his treatment.

A Palestinian teen is suing the Dutch company that supplied Israeli forces with the attack dogs that severely injured him three years ago.