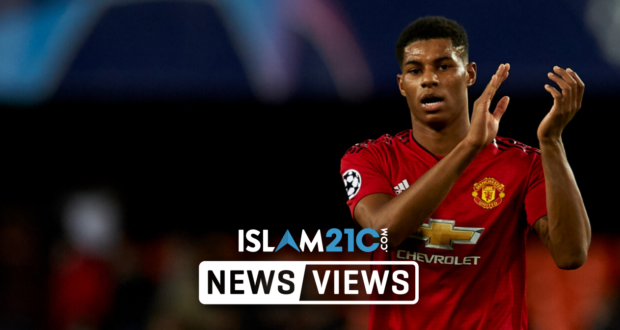 Following a campaign led by footballer Marcus Rashford, around 1.3 million children will now get free school meal vouchers during the holidays. The Manchester United forward, 22, said: “Just look at what we can do when we come together.”

The government has welcomed Mr Rashford’s “contribution to the debate around poverty” and has now promised eligible children a six-week voucher.[1]

I don’t even know what to say.
Just look at what we can do when we come together, THIS is England in 2020.

Marcus Rashford has been using his platform to urge the UK Government to allow vulnerable children who have been eligible for free meals during the COVID-19 lockdown to continue receiving them over the summer holidays.[2]

The Manchester United forward has already raised more than £25 million for charities during lockdown to help young people affected by COVID-19. His plea comes after the Department for Education, backed by Prime Minister Boris Johnson, promised to stop the scheme that provides the free meals.

The national voucher system was introduced in March to feed children from low-income families when schools were closed during lockdown measures. Vouchers worth £15 a week are eligible for the families of about 1.3m children in England who are on free school meals. But ministers announced earlier this month that the scheme would not run during the summer holiday period.1

The pandemic and the lockdown restrictions have been especially hard on low-income households, with many children. Rashford penned an emotional open letter to MPs citing his own experiences and struggles growing up, saying, “the system isn’t built for families like mine to succeed.”

An Open Letter to all MPs in Parliament…#maketheUturn

Despite hitting a brick wall with politicians who are refusing to reverse their decision, Rashford had vowed to fight on and bring the matter to light to gain the support of the general public.

We are trending no 1 and 2 in England. I need everyone’s help to keep this noise going as I head to training but before I go, to ALL MPs in Parliament, this is not about politics. The same way us players put rivalry aside when we put the England shirt on, please #maketheuturn

Now, in a remarkable turn of events, the Government has now #madetheUturn and introduced “a specific measure to reflect the unique circumstances of the pandemic”.

“The PM welcomes his contribution to the debate around poverty and respects the fact that he has been using his profile as a leading sportsman to highlight important issues.”

“In his first speech as de facto leader of Madina, the first instruction the Prophet (sallAllāhu ‘alayhi wasallam) gave to the people of Madina was “spread peace/security and feed each other.”[3] Without these two things, no society can be transformed into the vision that Allāh and His Messengers had for it. It is no coincidence that hunger and poverty were central themes in the early Qur’ān and life of the Prophet (sallAllāhu ‘alayhi wasallam) – despite the Muslims themselves being a minority and materially poorer. “He is not a believer who goes to sleep full whilst his neighbour is hungry.”[4] “Find me amongst the downtrodden, for indeed you are given victory and rizq due to your downtrodden.”[5] It is necessary for any society to achieve true prosperity – in the physical and metaphysical sense – to look after its most vulnerable. There are no more prophets to communicate Allah’s will in this regard, so it would be a great shame if the followers of the Final Prophet did not take up the mantle.”

Not just a skilful football player

The 22-year-old has been praised for his efforts by MPs, TV personalities, education leaders, and other European football clubs.

Nothing but admiration for what @MarcusRashford is trying to do with his platform. Respect from #ASRoma 👏https://t.co/IcijyW49U0

“Marcus Rashford we all know, or if your viewers don’t know, is a tremendously skilful football player.”

Ex-England international and TV presenter Gary Lineker said he was “very impressed” with Rashford’s efforts and understands that “kids wouldn’t ordinarily be fed during the summer holidays”, but these are “very, very difficult times”.

Rebecca Long-Bailey, the shadow Education Secretary, argued that the issue “is about humanity”.

“There will be many Conservative MPs today watching this and having read Marcus’[s] letter who will be agonising about whether they support the government or not in this because they will want what’s best for children.”

“So, I’m asking all politicians, whatever party they’re in, this is not about party politics, this is about making sure children don’t go hungry over the summer holidays.”

2020-06-16
Hamza Saleem
Previous: JK Rowling and the Hallowed Trans Lobby
Next: One God Many Names | Al-Fattāh (The Opener)