Mohamed Morsi: The final minutes of the unyielding president 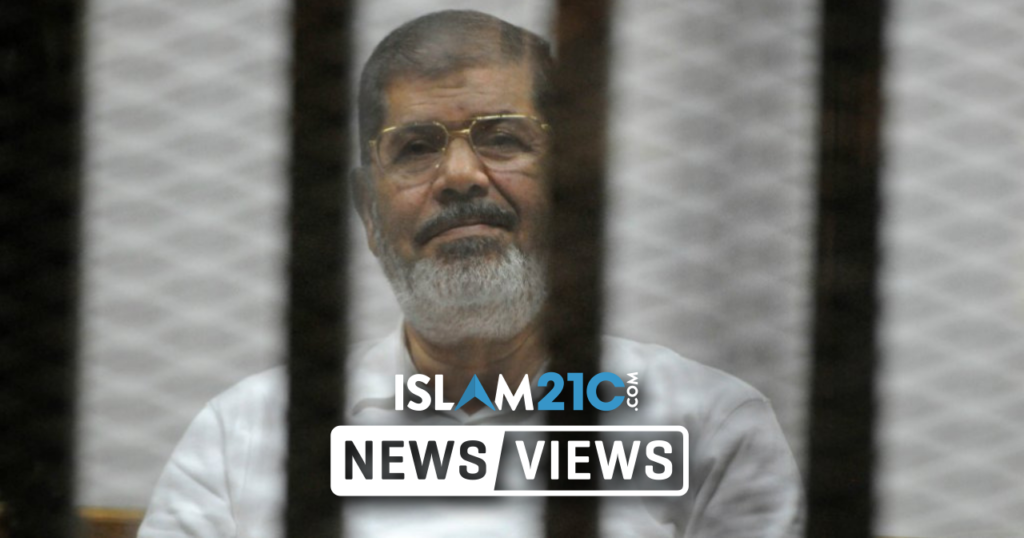 Several human rights organisations have begun calling for an international investigation in the death of Egypt’s President Mohamed Morsi after he collapsed in a court hearing on Tuesday afternoon. His final moments were outlined in a preliminary statement by the Executive Manager for the ‘Committee for Justice’, Ahmad Mufrih, in an interview with Aljazeera. [1] [2]

“We are suspicious of the account provided by the (Egyptian) General Prosecution surrounding the death of Dr Mohamed Morsi since the prosecution has played a pivotal role in preventing him from treatment whilst in prison. They are thus not an impartial source with regards what surrounds his death…”

“The current political and regional situation makes us suspect in the likelihood of the security authorities in Egypt having deliberately murdered Dr Morsi.”

According to reports, Morsi was buried in the early hours of Tuesday. Only Morsi’s direct family and his lawyer, Abdel Moneim Abdel Maqsoud, were allowed to attend the funeral, the latter adding that the janāzah (funeral prayer) was conducted over him at the ‘Turra’ Prison Hospital by only his family members. No media coverage of the funeral processions was permitted by the coup regime, nor were any of his supporters allowed to participate. Morsi was buried in Nasr City, in precisely the same burial ground as three former General Guides to the Muslim Brotherhood (raḥimahum Allāhu), including the previous General Guide, Mohamad Mahdi, who also died in detention. [3]

“We hope that my father, President Mohamed Morsi is a martyr with Allāh, and to Allāh all disputes will be resolved.” [4]

During the ‘court’ hearing

Eyewitnesses have noted that Morsi’s recent trials have seen an increased police and security force presence. According to Mufrih, recent days witnessed an increasing presence of aides to the Interior Ministry, as well as a large number of national security officers deployed throughout the halls and roads leading to the courtroom. Lawyers were thoroughly inspected and prevented from taking in their mobile phones or any electronic equipment that had previously been permitted.

The court hearing in which Morsi passed away started at 12:30 (Ẓuhr) local time. He requested that he be allowed to speak and was permitted. In his speech, he stressed that he had been prevented any medication and that he is facing premeditated death, adding that his medical condition is rapidly deteriorating and that he had repeatedly fainted in previous days without receiving any medical attention.

According to the same source, Morsi requested that he be allowed to meet his defence in order to deliver an amānah (trust) or will to the Egyptian people, but the court responded by turning off his voice transmitter in order to silence him.

During the hearing, Morsi said that he had evidence he would need to mention to a secret trial, seeing as mentioning them publicly may harm Egypt’s national security, adding:

“Until now, I cannot see what is happening in the court. I cannot see the lawyer, the media, nor the court. Even my defence will not have the evidence needed to defend me.”

He then recited the couplets:

He passed out for half an hour without response.

According to Mufrih, Morsi passed out for up to 30 minutes inside his glass cell before receiving any medical attention, despite his colleagues shouting and imploring that someone come to his rescue. The Geneva-based advocacy group added:

“From the very moment he was set to reside in the Republican Guards’ headquarters on July 3rd, 2013, he was subjected to revenge procedures, held in secret detention, and isolation for four months and prevented from seeing his family.”

He later appeared at the Police Academy on the 4th November of the same year to face his first ‘trial’. Throughout the ‘trial’, Morsi was prevented from being able to converse with his defence due to the preventative glass cell he was placed in and was held in solitary confinement for three years in Cairo’s ‘Turra’ prison.

According to the source, Morsi was suffering from chronic diabetes as a result of the conditions his detention and denial of basic treatment, which led to serious medical complications, including severe weakness in his eyesight, damage to his mouth and teeth, and recurrent collapsing. This is in addition to a recurrence of hypoglycaemia and severe rheumatism in the spine and neck, as a result of forcing him to sleep on the hard ground. This is not to mention Morsi’s liver and kidney issues that had resulted from malnutrition and the prison authority’s failure to provide adequate clothing, toiletries, or any type of literature.

Mufrih added that his group has evidence to suggest that Egypt’s Interior Ministry, headed by Mahmoud Tawfiq, gave direct orders to prison authorities to not respond to the demands of any leader from the Muslim Brotherhood, despite them suffering from chronic illnesses, even if this be at their own financial expense.

During a ‘court’ hearing on the 17th June 2019, President Mohamed Morsi collapsed and returned to his Lord. Much of the Muslim world has carried out funeral prayers in absentia and have demanded that the international community bring Egypt’s coup authorities to swift account.

May Allāh (subḥānahu wa taʿālā) have mercy on President Mohamed Morsi and accept him as a martyr, granting him the highest abode in Jannat al-Firdous. Āmīn.