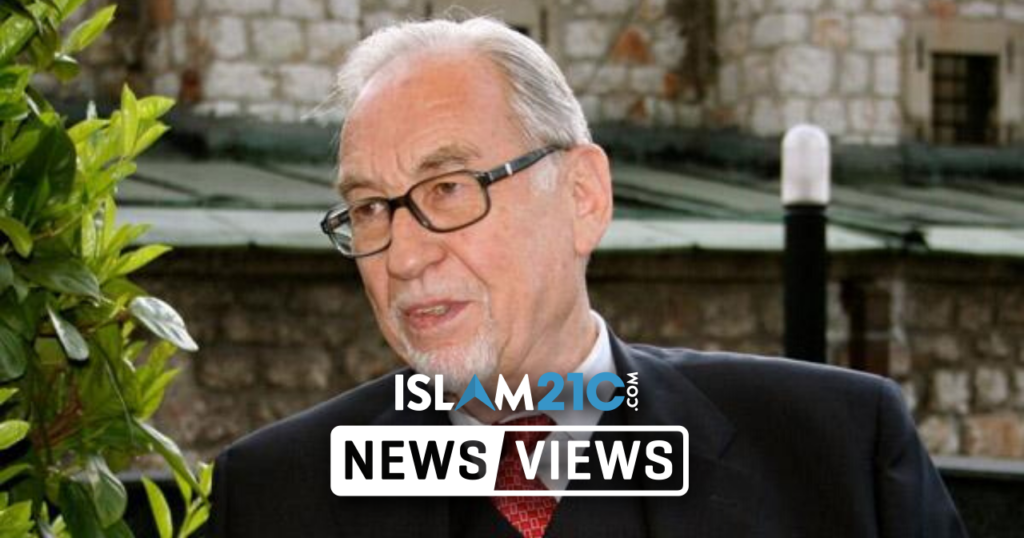 It is with deep sadness that we inform our readers that the scholar and diplomat, Murad Hoffman, has passed to meet his Lord (subḥānahu wa taʿālā). May Allāh have mercy upon him.

Murad Hofmann was born a Catholic in 1931 in Aschaffenburg, Germany. He later studied at the University of Munich and Harvard University. Hofmann converted to Islam in 1980 as a result of witnessing the Algerian War of Independence, in addition to his admiration of Islamic art.

His reversion was met with political resistance due to his high profile in the German government. Hofmann served as a diplomat for Germany for 33 years, beginning in 1961. He served as ambassador to Algeria and Morocco from 1987 to 1994, and was director of information for NATO. [3]

The “brilliant” thinker and scientist with a “first class” personality drew much attention to his religious beliefs with his publishing of many books and articles, including Islam: The Alternative, Journey to Makkah, and Diary of a German Muslim. On 13th January 2019, the Central Council of Muslims in Germany – of which Hofmann was an honorary and advisory member – announced that he had returned to his Lord at the age of 88.

“Humane, rational, morally serious yet a wonderful raconteur and dinner companion, it was my pleasure to get to know him and work with him as an editor of the Muslim World Book Review, to which he was an erudite and prolific contributor. In many ways, intellectually and temperamentally, he was Muhammad Asad’s true heir in Europe.”

“Murad Hofmann’s extraordinary contribution to the understanding of Islam is not only an immense enrichment in the German-speaking world. It is not difficult to predict that his books will also impress future generations. Likewise, even critics of Islam, such as Prof. Ursula Spuler-Stegemann, admit that Hofmann’s books “reflect a very attractive side of Islam.” It is therefore not surprising that Hofmann was and will remain a role model for many Muslims until the end. His tireless commitment, even in old age, to understanding and tolerance was particularly appreciated by the local Muslims. Murad Hofmann was undoubtedly the most influential Muslim today and a gift from Germany to Islam.” [4]

“He is proof that Islam is not an Arab or Eastern religion, rather it is a religion for all of humanity- whether they are black Africans, brown Arabs or white Europeans.”

May Allāh continue to raise up dedicated and upright individuals who will continue the propagation of Islam in Germany and beyond.