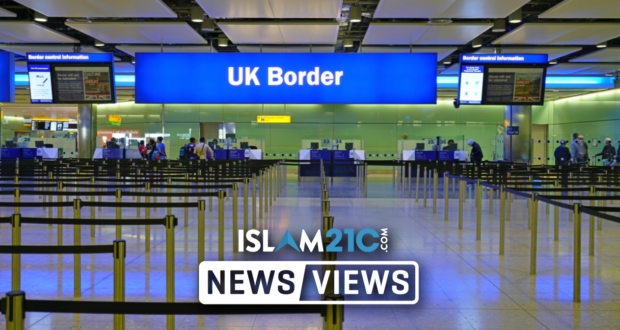 An online community petition has been launched urging the All-Party Parliamentary Group (APPG) on British Muslims to investigate the Home Office over their conduct with Schedule 7 powers. [1]

Schedule 7, officially titled Schedule 7 of the Terrorism Act 2000, is a counter-terrorism power that allows law enforcement to “stop and question, and, when necessary, detain and search individuals” who are travelling abroad. The Government states that this is to determine whether the individual is involved in the “commission, preparation or instigation of acts of terrorism.” [2]

The petition comes after advocacy group CAGE published its report containing an in-depth, evidence-based analysis of the counter-terrorism power. Titled Schedule 7: Harassment at Borders, the report details academic studies, legal cases, available statistics, and testimonies of those stopped under the power. The report compares the power to other stop and search powers, and lists recommended actions for the Government, civil society, and communities.

The report suggests that the detaining of Muslims at UK ports and airports has become widespread, and that the Schedule 7 border powers are a manifestation of structural Islamophobia. As a result, CAGE has made a complaint to the policing regulator, the Independent Office for Police Conduct, on behalf of ten individuals affected by the harassment procedure. The advocacy group has written to MPs on the APPG on British Muslims to “spell out” concerns regarding these detentions. [3]

Cerie Bullivant, who launched the petition and has been repeatedly stopped under Schedule 7, said:

“I have been stopped under Schedule 7 numerous times, even when I had my children with me. I am made to feel like a criminal and targeted because of my beliefs. There is no question in my mind that it is Islamophobic.”

“I have launched this petition because I believe the Home Office has not taken the concerns raised about Schedule 7 seriously. It’s why I am urging the APPG on British Muslims to take action and investigate the discrimination faced by Muslims travelling through UK Borders.”

The international director of CAGE, Muhammad Rabbani, who himself has been stopped over 20 times under Schedule 7 powers, said:

“There is a real sense of frustration from impacted communities about the sweeping and Islamophobic nature of Schedule 7 stops. Public bodies must uphold their duty to protect the rights of minorities, and it is why we are asking the APPG to urgently investigate this matter with the Home Office.”

The petition has reached nearly 2000 signatures in just 48 hours so far, and is rising fast. To view, sign, and share the petition, click the link below: