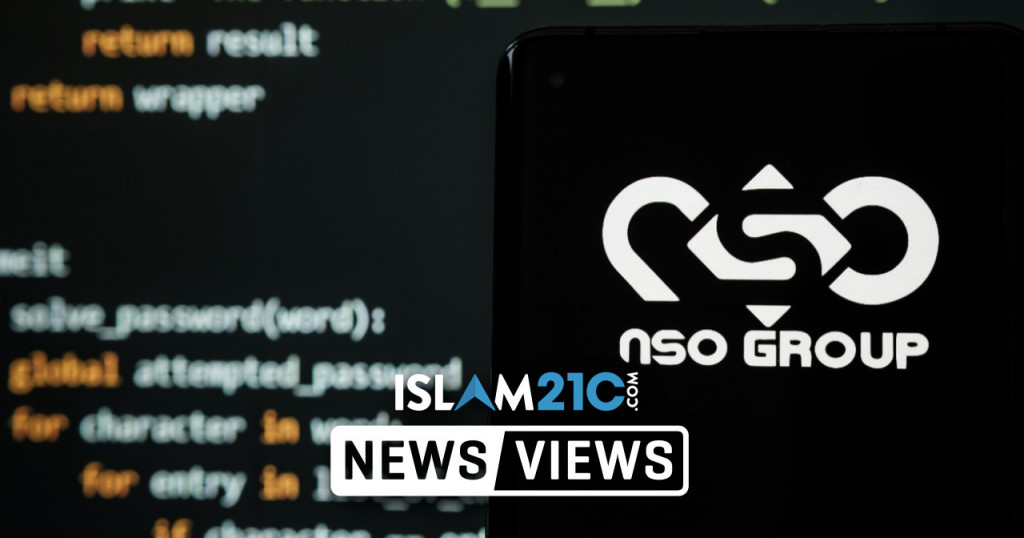 It seems that it is not enough for the apartheid state of ‘Israel’ to cause untold misery to countless Palestinians by invading their land and settling in occupied regions, which include the West Bank and East Jerusalem. Surprisingly, an estimated 700,000 settlers have moved into Palestinian lands since the Israeli annexation of the aforementioned areas in the 1967 Six Day War. Yet, today ‘Israel’ finds itself in the interrogation cell for another far-reaching and diabolical scheme: the Pegasus spyware system. [1] [2]

This is one of the biggest intelligence stories to hit the headlines since former NSA contractor Edward Snowden leaked troves of surveillance data and explosive details on US spying techniques, all of which shockingly targeted the nation’s own citizens. News of the Israeli cyberarms firm NSO Group selling its now infamous Pegasus spyware to authoritarian governments has alarmed the entire world. Over 50,000 individuals, including political leaders, are believed to have been deliberately targeted by rogue actors in the international community. France’s Emmanuel Macron, Pakistan’s Imran Khan, and South Africa’s Cyril Ramaphosa are just three world leaders identified in Pegasus data. [2] [3] [4]

One finds a number of prominent British Muslims within the list of names who have been targeted by the spyware, including the Baroness Uddin, who is a life peer in the House of Lords. In addition, other targets include academics, lawyers, and most shockingly the President of the Muslim Association of Britain (MAB), Raghad Altikriti.

Raghad Altikriti is the sister of Dr Anas Altikriti, the founder and CEO of The Cordoba Foundation, which is a think tank that specialises in studying the relationship between the Western and Muslim worlds. Dr Anas has also had his phone reportedly hacked by the UAE. Coincidentally, in a farcical 2014 decision, the country’s de jure leader Khalifa bin Zayed Al Nahyan designated the MAB and the Cordoba Foundation as “terrorist organisations”, alongside Islamic Relief, the Council on American-Islamic Relations (CAIR), and the Federation of Islamic Organisations in Europe. [5]

Dr Anas Altikriti provided the following details regarding the hacking:

“I was recently alerted by the Guardian newspaper that my phone number was among the many that were selected for targeting by customers of NSO and its hacking software known as Pegasus. In my case, the client in question appears to be the government of the United Arab Emirates.

“While I cannot deny being shocked at the news that my privacy has been violated in such an obscene manner, it comes as little surprise that the source of this criminal breach is an authoritarian undemocratic oppressive regime, which considers freedoms a threat and human rights an abomination.” [6]

After The Guardian released details of the UAE’s association with the hacking of Raghad Altikriti’s phone, the MAB unleashed a fierce and critical statement on Twitter. It sharply criticised the UAE government, as well as the British government, noting the latter’s haphazard attitude to the whole affair. [7]

In the first of a thread of tweets, the umbrella organisation representing dozens of British Muslim bodies said:

“The UAE Gov calculated hacking of our leadership, specifically, our President Raghad Altikriti & other private British citizens raises serious questions of national security. This has far-reaching implications for the sovereignty of Britain as an independent nation.”

“50,000 individuals & activists across the world, including the phones of several MAB’s leadership here in the UK, have been targets of the spyware. The implications of the used spyware against British citizens are chilling. If Britons aren’t safe at home where are they safe?” [8]

Stop what you're doing and read this. This leak is going to be the story of the year: (LINK: https://t.co/zhC0LN4TlC) pic.twitter.com/doo4HDDzxt

Indeed, while the British government admits that it has tried repeatedly to address the NSO Group’s hacking of iPhone operating systems and Android devices, it has been particularly lax in its approach.

Lord True, the Minister of State at the Cabinet Office, said:

“We have raised our concerns several times with the government of Israel about NSO’s operations. We are seeking in many ways to try to secure better control and have legal, proportionate and proper use of any such devices, and better control of exports.” [9]

Furthermore, in a deliberately vague statement, a spokesman for the Foreign, Commonwealth, and Development Office (FCDO) said:

“It is vital that everyone uses cyber capabilities in a way that is legal, responsible and proportionate to ensure cyberspace remains a safe and prosperous place for everyone.

“We speak regularly with partners and work closely with allies to tackle threats, improve resilience and raise any concerns where they arise.” [9]

The spyware is capable of turning on an infected device’s camera, microphone, and GPS locator. It also has the ability to extract and read emails, text messages, photographs, documents, and other files, all whilst the end user is completely unaware. It has been used by governments with questionable records on human rights, such as the UAE, Saudi Arabia, and India.

Amnesty International and Forbidden Stories – a France-based non-profit journalism organisation – both gained access to a leak of more than 50,000 phone numbers that were targeted by customers of the NSO Group since 2016. The vast amount of data was then shared with media partners, including The Guardian and 16 other news agencies. Over a number of months of investigative journalism, the collective worked on what was called the Pegasus Project. This collaborative effort explored the inner workings of the NSO Group and the extent to which Pegasus has been used by governments in targeting their citizens, be they in political parties, activist circles, or ordinary citizens with no clear political connections.

In addition to the likes of Dr Anas Altikriti, Raghad Altikriti, and the Baroness Uddin, there is also the disturbing case of the late Saudi author and government critic, Jamal Khashoggi (raḥimahu Allāh). In October 2018, Khashoggi was murdered and butchered by Saudi hitmen on the alleged orders of Mohammed Bin Salman. There is evidence that the Pegasus spyware was used to infect the devices belonging to family members of Khashoggi, before his brutal murder was carried out.

The late journalist’s fiancée Hatice Cengiz, legal wife Hanan Elatr, and son Abdullah were all reportedly targeted with the virus. In Cengiz’s case, Forbidden Stories believes that her device was infected with Pegasus just four days after Khashoggi’s brutal murder. [10] [11]

Cengiz told the Middle East Eye the following on Monday:

“Action must be taken by the UN and our governments to stop these countries spying on those fighting for justice and human rights. They must know there will be serious consequences…The companies who supply this software must be held accountable.” [11]

Software developers and antispyware experts have been working hard to battle against Pegasus, which is seemingly undetectable. Pegasus exploits the so-called “zero-day” vulnerabilities found in Android and iPhone operating systems alike. These vulnerabilities are bugs or loopholes in firmware that developers themselves are unaware of, which means that they cannot act to address such weaknesses. However, the latest version of iVerify claims to inform a user as to whether their device was infected, or had an infection attempt made by Pegasus. [12]

Just released iVerify 20.0, which now tells you if it detects traces of Pegasus → https://t.co/nJDAAcfGNv @IsMyPhoneHacked

The United Nations High Commissioner for Human Rights, Michelle Bachelet, released a statement last Monday. She called for strong human-rights compliant laws to be implemented in order to combat spyware such as Pegasus.

In her statement, Bachelet said:

“Revelations regarding the apparent widespread use of the Pegasus software to spy on journalists, human rights defenders, politicians and others in a variety of countries are extremely alarming, and seem to confirm some of the worst fears about the potential misuse of surveillance technology to illegally undermine people’s human rights.” [13]

“Various parts of the UN Human Rights system, including my own Office, have repeatedly raised serious concerns about the dangers of authorities using surveillance tools from a variety of sources supposed to promote public safety in order to hack the phones and computers of people conducting legitimate journalistic activities, monitoring human rights or expressing dissent or political opposition. [13]

Bachelet called upon governments to engage in their due diligence by ensuring that the protection of privacy rights is afforded at the state level. As she astutely noted, “One key step in this direction is for States to require by law that the businesses meet their human rights responsibilities by becoming more transparent in their design and use of products and by putting in place effective accountability mechanisms.” [13]