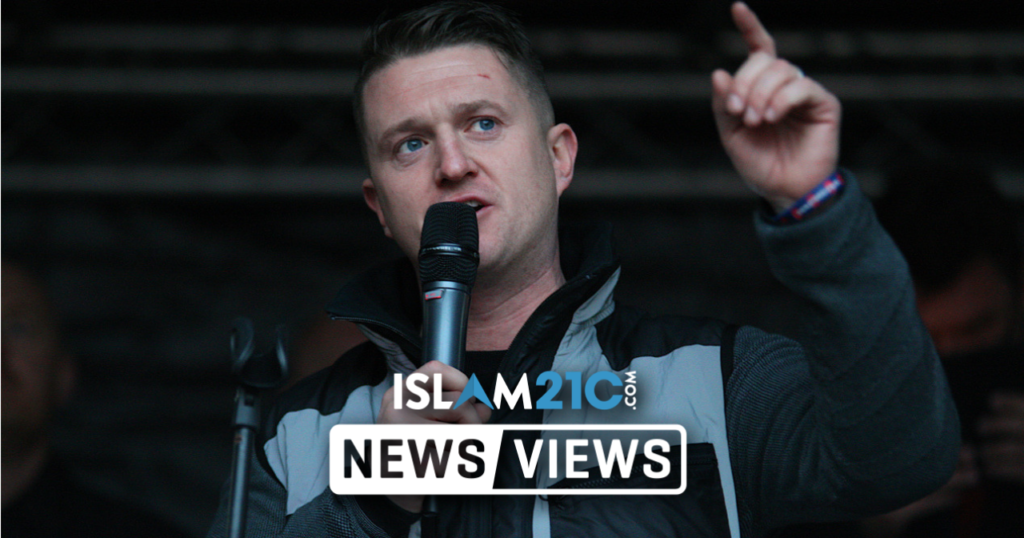 In a welcome development for this year’s Eid al-Adha celebrations, an unlikely name has joined in with the festivities: Tommy Robinson. Robinson is the founder of the English Defence League (EDL), long-standing Islamophobe, and convicted criminal. With his real name actually being Stephen Yaxley-Lennon, the notorious figure had been jailed in the past for common assault and contempt of court. Ironically, it now appears that due to recent developments, he will be unwillingly commemorating the Muslim tradition of Eid in a special way. After losing a libel case, the High Court judge Mr Justice Matthew Nicklin slapped the extreme anti-Muslim activist with a legal bill amounting to 100,000 pounds. The suit was brought forward by a bullied Syrian schoolboy, Jamal Hijazi. [1] [2]

Legal representatives for the young Syrian refugee were ecstatic that their client had been “entirely vindicated”. Francesca Flood, a solicitor for Burlingtons Legal, said the following:

“It took great courage for our client, Jamal Hijazi, to pursue his libel action against such a prominent far-right and anti-Islam activist as Stephen Yaxley-Lennon, better known as Tommy Robinson.” [1]

Robinson had made false and defamatory allegations against Hijazi in 2018, after an incident in a Huddersfield school playground. On Thursday, he was ordered by Mr Justice Nicklin of the High Court to cough up the six-figure sum in damages to the now 18-year-old Hijazi. At the time of the incident, Robinson had claimed Hijazi was “not innocent”, even alleging that the boy “violently attacks young English girls in his school”. [1]

Mr Justice Nicklin told Robinson that his actions had been carried out in a way that was “calculated to inflame the situation”. In addition, Hijazi’s counsel Catrin Evans QC went a step further by describing Robinson as being “a well-known extreme-right advocate with convictions for violence, as well as fraud and drug offences”. [1] [3]

Contrary to Robinson’s lie that Hijazi was the aggressor in the October 2018 Almondbury Community School incident, video footage confirms that the then 15-year-old student was the victim of a torrent of abuse at the hands of another pupil. He was thrown to the ground, taunted, and forced to drink a liquid from a bottle. Some commentators have suggested that the attacker was mimicking the infamous torture technique of waterboarding, which has been widely used by the CIA and other security agencies against alleged terror suspects.

The young Syrian refugee, who hails from the iconic city of Homs, had escaped from the war-torn country and lived for a number of years in neighbouring Lebanon. Afterwards, both he and his family resettled in the UK following the implementation of a UN programme. In an interview with ITV News, Hijazi shed light on the trauma he had to face following the playground incident:

“I woke up at night and just started crying about this problem. They think I’m different – different from them…I don’t feel safe at school. Sometimes I say to my dad, ‘I don’t want to go to school anymore’. I was just crying and I didn’t do nothing because I respect the school rules.” [4]

The young refugee continued his statement by adding:

“I was feeling unsafe everywhere – even to go to the shop. I was feeling like I couldn’t study or do my homework. I woke up at night and just started crying because of this problem. When I saw everyone looking at this video I felt ashamed of myself and why it happened. I was really upset about that.” [5]

Hijazi reportedly received death threats as a result of Robinson’s unfounded allegations, which were circulated through two videos published on the social media platform Facebook. In 2019, the platform subsequently handed Robinson a permanent ban from using the site. The ban also applies to using Instagram, which is wholly owned by Facebook. [6]

A few weeks after news emerged of the altercation involving Hijazi and the fellow student at Almondbury Community School, another incident occurred. Videos emerged of Hijazi’s sister – who also attended Almondbury – being attacked by pupils. In a shocking video recording, the young hijab-clad pupil is brutally assaulted and hurled to the ground. Some may justifiably make the case that Robinson’s “calculated” acts provoked other students into targeting Hijazi’s sister. [7]

The 2018 case of Jamal – alongside the subsequent attack of his sister – received immense worldwide attention. A crowd funding campaign set up in support of the Hijazi family received an incredible 158,000 pounds in donations in under two months. GoFundMe spokesman and senior director John Coventry made the following observations regarding the campaign:

“This has been one of the most widely shared and fast growing GoFundMe pages of 2018 with people coming together from 50 countries in a truly inspiring show of support. We’re now working closely with the family to get the funds directly to them.” [8]

Moreover, then Prime Minister Theresa May weighed in by stating that the sheer volume of donations reflected the generosity of the British people. She also made it very clear that the attack against Hijazi was “absolutely terrible”.

May made the following remarks in front of reporters, whilst attending the 2018 G20 Buenos Aires summit:

“I thought it was absolutely terrible…what (he) went through. Our thoughts are with him. But I think if you look at what happened, the real spirit of Britain came in the response of the British people to that incident.

“As you say, most people were sickened and angered by it. The huge response of support…that we have seen from the British people shows our true spirit and shows we are a welcoming people.” [9]