Are you ready for our first ever NATIONAL CAMPAIGN?
Home / News / Reports: Arab nations seek to halt Turkish influence in Jerusalem 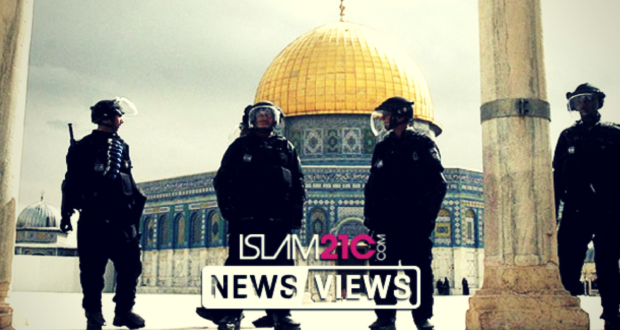 The Israeli newspaper, Haaretz, reported this week that senior representatives from Jordan, Palestine and Saudi Arabia have warned Israel about the influence of Turkey in Eastern Jerusalem, suggesting that Turkey was “extending its influence in Arab neighbourhoods” in an attempt to stake a claim in resolving the long-disputed issue.[1]

The “peace-process”, which had already stalled for a number of years due to Israel’s ongoing expansion of illegal settlements, was further set back with US President Trump’s decision to move the US embassy to Jerusalem,[2] and the Zionist regime’s brutal murdering and wounding of Gazan protestors earlier this year.[3] Yet all along, Arab influence on the peace talks have been minimal or even implicitly effective towards the Zionist Occupation’s cause, given various vested interests, not least attaining the pleasure of the US Administration.

Haaretz reported that each nation had a different fear. Jordan is concerned that their position as custodian of Al-Aqsa would be compromised if Turkish influence was not curtailed, even suggesting that Israel was “sleeping at the wheel” due to Israeli fears of upsetting President Erdoğan after their 2016 reconciliation.[4]

The Palestinian Authority meanwhile are reluctant to see another player enter the region and are supposedly concerned by the high level of donations being made to local Islamic organisations by the Turkish government, who have also been linked to the high volume of Turkish visitors to Al-Aqsa—the third holiest site in Islam which has been long-neglected by the majority of Muslims around the world.

Lastly Saudi Arabia, under new direction by Crown Prince Mohammed Bin Salman, is said to be fearful that President Erdoğan would be seen to be “the only leader truly standing up to Israel and the Trump administration”,[5] and thus attain the backing of the Arab and Muslim world at large, who have long stopped looking to Saudi Arabia for leadership on matters concerning the Ummah.

The three nations are all said to have separately voiced their fears to Israel. The report comes amidst a warming in relations between Israel and Saudi Arabia, who have reportedly held multiple secret meetings together facilitated by the Egyptian coup regime of El-Sisi.[6]

2018-06-29
Abdullah Izzadin
Previous: Syrian Hospitals shut down, scores killed as Daraa is “burnt to the ground”
Next: 7 Key Ingredients to a Healthy Marriage