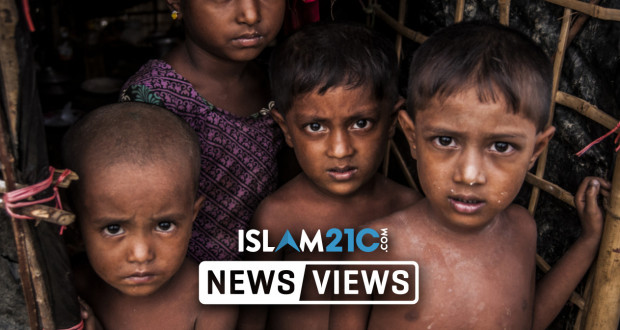 After two senior-ranking United Nations High Commissioner for Refugees (UNHCR) officials visited the isolated and cyclone-prone island of Bhashan Char on Monday, local Bangladeshi police have stated that up to 4,000 Rohingya refugees protested against living conditions during the inspection trip, which have been likened to a prison setting. [1]

“The Rohingya who are there became unruly the moment the UNHCR representatives landed [on the island] by helicopter today…They broke the glass on warehouses by throwing rocks. They came at the police…Their demand is they don’t want to live here.” [1]

Around 18,000 Rohingya refugees have already been controversially transported to the island by Bangladesh’s navy since December of 2020. The government plans to eventually rehouse a further 92,000 – from the hugely overcrowded Cox’s Bazar camps of Kutupalong and Balukhali – to the island. [2]

While the government has denied charges of abuse against the Muslim refugees from neighbouring Myanmar, one Rohingya man said that police had used batons to beat protesters and barred refugees from entering buildings where the UNHCR inspectors were present. [3]

In response to reports of police brutality, the UN refugee agency released a statement, saying, “We regret that those affected reportedly include children and women.” [1]

“The UNHCR delegation was able to meet with a large group of refugees and to listen to the various issues that they raised, which the delegation will further discuss with the Bangladesh authorities.” [1]

The predominantly Muslim Rohingya people have had a horrific history in the country of Myanmar. For decades, they have been persistently oppressed. In 1978, when “Operation Dragon King” was undertaken by the Myanmar military, the first refugees entered Bangladesh. There have been numerous subsequent occasions where the leadership of Myanmar has attempted to push greater numbers out of its borders, often by deeming the Muslim minority stateless. Various “clearance operations” by the military have seen successive large groups of Rohingya flee to Bangladesh, with “Operation Clean and Beautiful Nation” taking place in 1991-1992, and the most recent being documented from 2017 to date. Countless gang rapes, accounts of forced labour, murders, and the burning of entire villages by soldiers have been widely reported. [4]

In July 2018 oral testimony was given by Human Rights Watch (HRW) researcher on women’s rights, Skye Wheeler, to the Tom Lantos Human Rights Commission – a bipartisan commission in the US Congress tasked with defending and promoting international human rights. She noted appalling examples such as that of Hala Sadak, a 15-year-old from Maungdaw township, who told HRW “large areas of scarring on her right leg and knee were from where soldiers had stripped her naked and then dragged her from her home to a nearby tree where, she estimates, about 10 men raped her from behind.” [5] [6] [7]

Today, while hundreds of thousands have fled to neighbouring Bangladesh, they are still suffering from sexual abuse, rape, and beatings. Sadly, the only difference in some cases is the nationality of the perpetrator – once Burmese, now Bangladeshi. Be they in camps in Cox’s Bazar or on Bhashan Char, many Rohingya are suffering the same ill-treatment.[8]

As one Rohingya woman put it:

“We feel vulnerable. Sometimes we feel as scared as we used to feel with the violent Burmese soldiers, before we fled our homeland.” [8]

In Myanmar, deposed leader Aung San Suu Kyi, who was arrested after the country’s powerful military staged a coup in February of 2021, remains detained and her current whereabouts are unknown. [9] The disgraced former leader was once respected for her non-violent pursuits to call for democracy whilst under house arrest between the years 1989 to 2010 and was awarded the Nobel Peace Prize in 1991. She has in recent years been exposed for her silence on the persecution of the Rohingya.

Since the early 2021 coup, the military has continued to act with impunity, crushing dissent, and killing hundreds, including 43 children. Head of the armed forces, Commander-in-Chief General Min Aung Hlaing, who styles himself ‘Chairman of the State Administrative Council’, has never made any attempt to conceal his detestation of the Rohingya; he was notoriously quoted in recent years as saying “…the Bengali problem was a long-standing one which has become an unfinished job.” [10] [11]