Russian fighter jet shot down by rebels in Syria 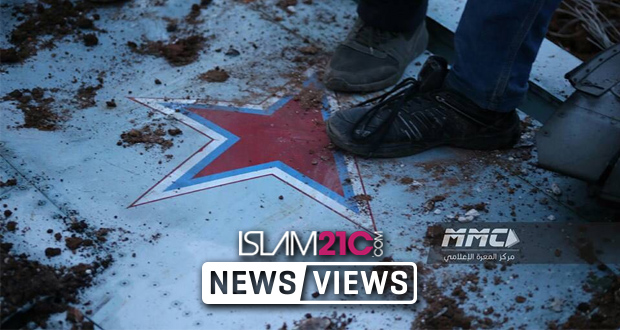 Images have emerged from northern Syria showing a downed Russian fighter jet, on Saturday. Footage shows a red star on the wing of a Sukhoi-25 fighter jet confirming its Russian origin. [1] It is unclear how the jet fighter was brought down, whether it was by use of anti-aircraft missiles or machine gunfire.

Initial reports suggested that the pilot died in a gunfight with rebels, however the Russian defence ministry have claimed that the pilot committed suicide by pulling a grenade pin and thus killing himself.[2] The downing of the fighter jet follows a rebel forces operation which damaged several Russian planes and resulted in the deaths of two Russian armed forces members in Hmeimim airbase in December 2017. [3]

Footage shared on social media showed the fighter jet on fire after being hit by rebels. Activist and journalist, Hadi Abdullah reported from the site of the destroyed plane, showing it scattered on the ground and on fire. [4]

In the immediate aftermath of the downing of the Russian fighter jet, eye witness reports state that the skies were palpably clear of fighter jets. [5] However, after a brief lull, Russia responded with as many as 150 airstrikes in Idlib province targeting women, children and the infirm. [6] Russia has been known to target hospitals, which is a war crime in and of itself. [1]

Russia has a seat on the UN security council, and is ostensibly closely involved in the Syrian peace talks, however it continues to bomb an already obliterated population, that is facing chronic instability as war enters its 7th year. [7]

Russian interference in the Syrian conflict has resulted in colossal damage to infrastructure and human lives. It is estimated that nearly 10,000 civilian deaths were caused as a result of Russian raids in 12 months alone. [8]