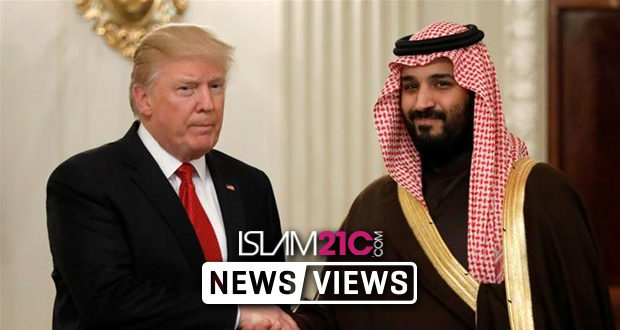 Crown Prince of Saudi Arabia, Mohammad b. Salman has vowed to return the country to ‘Moderate Islam’. In a statement he made at an investment conference in which he announced the launch of an ‘economic zone’ spanning across Saudi Arabia, Jordan and Egypt, the heir to the throne promised to drive the country towards “moderate Islam open to the world and all religions…” which includes “combating extremist thoughts” and destroying them “now and immediately”.[1]

Leaders and governments around the world are rushing for public relations credit for countering what they call ‘extremism’. Almost all, however, have failed to define what the word even means. Critics have concluded that it is evident that every regime works by its own definition, if one even exists. What is meant by western regimes tends to be completely different to what it means for majority-Muslim countries like Saudi Arabia. In fact, the former often regard the latter as the most ‘extreme’ countries in the world.

It is noteworthy, however, that this announcement follows recent arrest sprees targeting some of the Muslim world’s most notable scholars and outspoken critics of the very political violence that dissenters are banned under the pretext of.

The arrests included Dr Salman al-Ouda, one of the world’s most renowned scholars and moderate Islamic thinkers, whilst a travel-ban has been imposed on his young children,[2] who recently lost their mother in a tragic road collision. The recent spree of ‘reforms’ seeking to rescind certain restrictions and impositions on Saudi society including the ban on women driving most recently has coincided with more arrests of academics and thinkers, including one for merely ‘tweeting about the arrest of his father.’

Reports have also emerged of the arrest of Dr Ziad Mohammad Al-Bannawi, a retired colonel and a specialist in politics and security sciences, Yosuf Ahmad Al-Qasem, the Fiqh Associate Professor in the Higher Judicial Institute amongst dozens of university academics, scholars, Imams and political thinkers.

Organisations such as Human Rights Watch have questioned the apparent dichotomy between the kingdom’s accommodation of ‘hate-speech’ alongside its imprisonment of those who criticise it, which in par with the ‘reform’ to ‘moderation’ has made many question what this actually means.

The economic area dubbed ‘NEOM’ on the Red Sea coast “has already been earmarked as a liberal hub akin to Dubai, where male and female bathers are free to mingle,” a reality that many Muslims consider inconsistent with their tenets of modest dress and professional interaction based on mutual identification rather than exterior sexualisation.