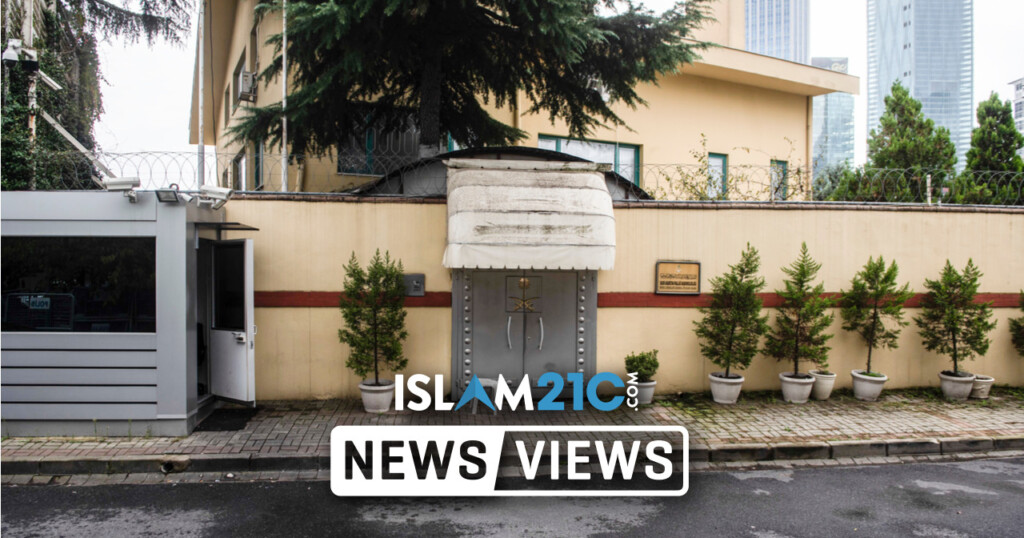 On Friday, the United States released a hotly anticipated bombshell report on its intelligence community’s assessment of the disappearance and killing of the renowned Saudi author and journalist Jamal Khashoggi (raḥimahu Allāh). [1]

The report, declassified by Avril Haines, Director of National Intelligence, was entitled Assessing the Saudi Government’s Role in the Killing of Jamal Khashoggi. Published in 2018, the report goes into detail concerning the events that led up to the late journalist’s untimely death, and the “15-member Saudi team” that arrived in Istanbul on 2nd October 2018 in advance of Khashoggi’s scheduled trip to the Saudi consulate in Istanbul.

Shortly after its release, Khashoggi’s former fiancée, Hatice Cengiz, tweeted a photograph of the slain journalist with the hashtag #justiceforjamal.

“We assess that Saudi Arabia’s Crown Prince Muhammad bin Salman approved an operation in Istanbul, Turkey to capture or kill Saudi journalist Jamal Khashoggi. We base this assessment on the Crown Prince’s control of decisionmaking in the Kingdom since 2017, the direct involvement of a key adviser and members of Muhammad bin Salman’s protective detail in the operation, and the Crown Prince’s support for using violent measures to silence dissidents abroad, including Khashoggi.” [1]

“Since 2017, the Crown Prince has had absolute control of the Kingdom’s security and intelligence organizations, making it highly unlikely that Saudi officials would have carried out an operation of this nature without the Crown Prince’s authorization…”

“The Crown Prince viewed Khashoggi as a threat to the Kingdom and broadly supported using violent measures if necessary to silence him. Although Saudi officials had pre-planned an unspecified operation against Khashoggi we do not know how far in advance Saudi officials decided to harm him.” [1]

The Saudi government has retorted angrily to the release of the intelligence report, saying in a statement carried by its state news broadcaster, SPA:

“The government of the Kingdom of Saudi Arabia completely rejects the … assessment in the report pertaining to the Kingdom’s leadership, and notes that the report contained inaccurate information and conclusions.” [2]

Unsurprisingly, the UAE has come to the defence of its ally. In its own statement released via the Emirates News Agency, the UAE said that it “expressed its confidence in and support for the Saudi judiciary rulings, which affirm the kingdom’s commitment to implementing the law in a transparent and impartial manner, and holding all those involved in this case accountable.” [2]

Pakistan was also supportive of the Saudi government, saying that it “recognizes Saudi efforts in this regard and expresses solidarity with the Kingdom of Saudi Arabia.” [2]

Following the disclosure, US President Biden did not go so far as to directly punish the Crown Prince of Saudi Arabia, Mohammed bin Salman, for the report’s conclusions. However, Biden has taken other steps, including a cessation of US backing for Saudi Arabia in the Yemeni civil war. The Biden administration has also imposed a short-term ban on the export of F-35 fighter jets to the UAE, and certain munitions to Saudi Arabia. [3]

In addition to the openly supportive statements from the UAE and Pakistan, the UK’s Foreign, Commonwealth and Development Office released a somewhat muted statement:

“We called for a thorough, credible and transparent investigation to hold those responsible to account and imposed sanctions against 20 Saudis involved in the murder… The Foreign Secretary raised the issue during his visit to Riyadh last year, and we continue to raise it in our engagements with the Saudi government.” [2]

In comparison, the US House Intelligence Committee Chairman, Adam Schiff, was most outspoken in claiming that Mohammed bin Salman had “blood on his hands”. [2]

The strongest rebuke outside the US came from Agnes Callamard, the UN’s Special Rapporteur on extrajudicial killings. In a Facebook post, Callamard wrote:

“The United States government should impose sanctions against the Crown Prince, as it has done for the other perpetrators – targeting his personal assets but also his international engagements…” [2]

There will undoubtedly be further changes in the diplomatic relationship between the world’s largest military power and its key Middle East ally.

The tone has already been set for some time, with Biden previously calling Saudi Arabia a “pariah state”, and saying in October 2020 that “under a Biden-Harris administration, we will reassess our relationship with the Kingdom [of Saudi Arabia], end US support for Saudi Arabia’s war in Yemen, and make sure America does not check its values at the door to sell arms or buy oil…” [4]

More recently, the Biden administration ended its support towards Yemen’s devastating civil war. In answering a question from a reporter on 25th February, White House Press Secretary Jen Psaki said, “…the Crown Prince has been engaged with his appropriate counterparts. The President will be engaged with his appropriate counterparts”, thus reiterating the fact that King Salman is the direct counterpart to President Biden. [5]

Biden is evidently looking to reset relations with Saudi Arabia, moving away from the warmth exuded by the Trump administration towards Riyadh. It will be of interest to note his approach towards Saudi’s biggest regional rival, Iran, which has in recent years ramped up nuclear production after former US President Donald Trump decided to withdraw from the Joint Comprehensive Plan of Action non-proliferation agreement in May 2018. [6]

Whatever changes occur, it is rather unlikely that Biden will take any drastic action. As Kristian Ulrichsen, Fellow for the Middle East at Rice University’s Baker Institute for Public Policy, shared with Al Jazeera:

It may be argued that the US and Saudi Arabia will pursue closer ties regarding mutually beneficial topics, such as tackling Iran and the ongoing war in Syria, as well as the ever-present Palestinian issue and Israel’s continued settlement building programmes.