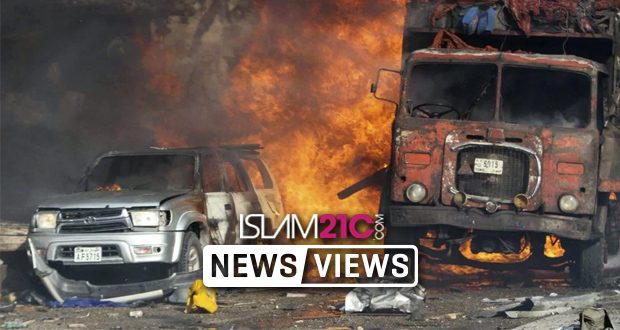 Somalia is in mourning after a large bomb blasts tore through its capital Mogadishu on Saturday, killing more than 300 people, injuring hundreds more.

“We will observe three days of mourning for innocent victims, flags will be flown at half-mast. Time to unite and pray together. Terror won’t win. I call on our citizens to come out, extend help, donate blood and comfort the bereaved. Let’s get through this together.”

Thabit Abdi Mohammed, Mogadishu’s mayor, told reporters while he was donating blood to a hospital:

“I call on the Somali people to visit the city’s hospitals and donate blood. Please, come to the rescue of your brothers.”

No group has reportedly claimed responsibility for the attack. The attack is reported to have taken place 48 hours after both the defence minister and army chief of Somalia resigned from their posts “without explanation”.[1]

During the three-day mourning period more and more victims have been discovered and treated at hospitals throughout the region, with some even being flown out to Turkey from as soon as the blast occurred.

However, many are still missing, hospitals are reported to be running out of blood, and anger is growing, with many social media users pointing out double standards of reporting African and Muslim suffering compared to the “collective outrage” exhibited with white suffering elsewhere.[2]

The world is unfair, Social media can attest to that. 276 died in Somalia and we aren't doing the same thing we did when it was Las Vegas

But it got 100x less coverage

Imagine if 250+ ppl in the US or UK or France were killed in a truck bomb. That’s what just happened in Somalia. They deserve to be mourned.

The day before, Christian militants also reportedly carried out an attack on a mosque during Friday prayers in the Central African Republic killing more than 20,[3] which also received minimal coverage.