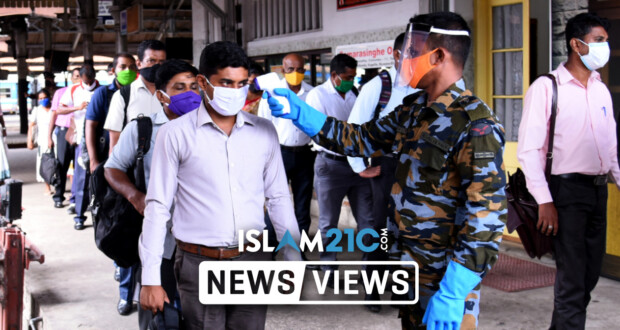 In abhorrent news from Sri Lanka, the government of Sri Lanka has cremated Shaykh, a 20-day-old Muslim baby boy.[1]

Despite the widespread condemnation of the forced cremations of Muslims and Christians who allegedly have passed away from COVID-19, Sri Lankan authorities are continuing to ignore the fact that there is no health risk linked to burying those who have succumbed to the disease.[2]

The Supreme Court of Sri Lanka earlier this month refused to hear an appeal by Christian and Muslim families whose loved ones were forcibly cremated due to unfounded concerns by the government that the virus could spread to groundwater.[3]

On the evening of 7th December, the parents of Shaykh noticed that their baby boy was having considerable breathing difficulties. They took him to the Lady Ridgeway Hospital for Children in Colombo, where doctors carried out some tests. Speaking to BBC Sinhala, the baby’s father, Mohamed Fahim, said:

After then testing both Fahim and his wife, Fathima Shafna, medical professionals found both to be negative for the coronavirus.

Fahim rightly questioned how his child was positive for the virus when neither he nor his wife were carrying the disease.

“I asked how my baby was positive when both of us, even the mother who was breastfeeding him, were negative?” [1]

Fahim and his wife, who had both been elated by news of their conception after having patiently waited for six years, were left devastated after hospital officials sent them home and later informed them that their baby had died.

To add to their grief, the parents’ repeated appeals to doctors to perform a PCR (polymerase chain reaction) test to confirm whether their baby had in fact died of COVID-19 were denied.

The appalling news yet again highlights the difficulties faced by minorities in Sri Lanka, as the Buddhist Sinhala government continues with its baseless approach of burning all bodies that have been declared to have died of COVID-19.

Christians and Muslims alike are resolute in their belief that cremation is not a part of their respective religions, yet are being given no choice but to suffer in witnessing family members being subjected to this unnecessary form of final disposition.