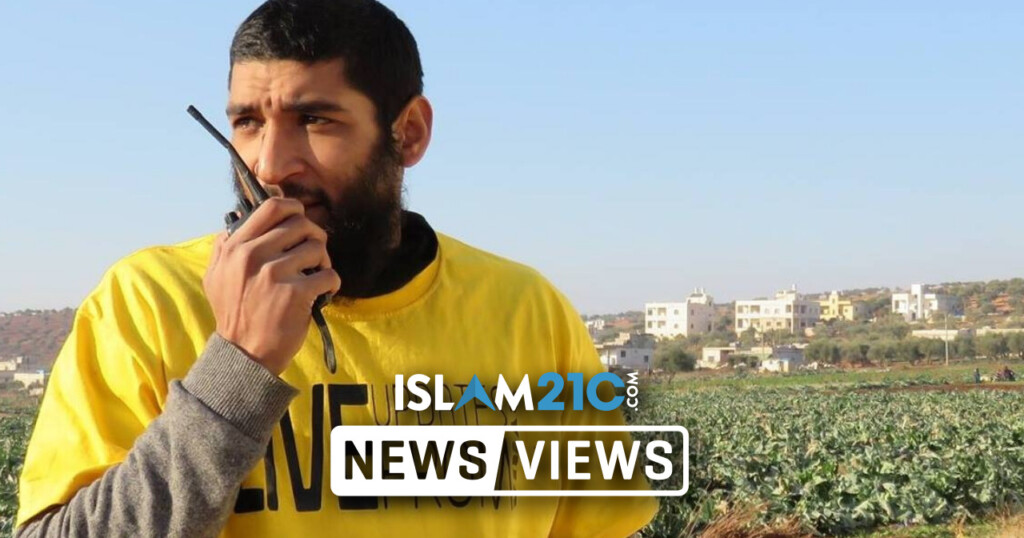 Sharif is said to have been detained whilst viewing a property that he was planning to rent with his wife, near the Turkish border at around 8.30pm and 9.30pm local time on Monday. [2]

Around 15 members of HTS arrested Sharif, taking him to an undisclosed location, according to Bilal Abdul Kareem, an American journalist based in Idlib.

HTS is a coalition of fighters which include several factions which were formerly aligned with al-Qaeda and are considered to be the most powerful rebel group in Idlib.

As well as detaining Sharif, masked men from HTS have searched and seized the family’s home last night whilst shutting down the offices and projects of his humanitarian organisation, Live Updates from Syria.

HTS is said to have also raided the homes of several other foreign nationals linked to Sharif, confiscating laptops and mobile phones, sources told MEE.

“A man [Tox] who has given up everything to come here and help those who are oppressed…he always tells me no matter what, the ummah [community] comes first before everything. even before myself….and right now he needs that ummah to stand behind him and fight for justice.” [3]

In response to the news, Dr Yvonne Ridley tweeted:

“Unless or until HTS releases a statement we have to assume this British aid worker has been kidnapped by the rebel group. Raiding an aid worker’s home, team handed, with 15 masked thugs and without explanation, is kidnap” [4]

“If this was a legitimate action surely those responsible would have released an official statement by now. Folk aren’t fighting for a free Syria only to have another set of thugs set up a new regime.” [5]

“No wonder the #HTS leaders have lost so much territory to #Assad around #Idlib. The fools are so busy fighting among themselves they’ve taken their eye off the ball. #FreeTox Targeting a British aid worker is a gutless act revealing breathless stupidity!” [6]

“While the allegations are unclear, we are deeply concerned about his right to a fair hearing and access to his family and support network.”

“CAGE calls on HTS to confirm that Tauqir Sharif is being treated humanely and provided with all his rights and due process. We ask HTS authorities to release Tauqir Sharif immediately and that any charges against him are clearly presented to him and his family as part of a clear and transparent legal process.” [7]

“I met Tox in Syria in 2012. He’d left behind his life in Britain to help the people in Syria and has never left. For eight years, Tox and his wife Racquelle Hayden Best have built and run schools, mosques, homes and camps for refugees in Northern Syria. Tox is deeply loved and respected in Syria and is a household name among British Muslims.

“Despite his immense sacrifices, Tox has endured assaults by the Asad regime, survived bombing attempts by ISIS and had his nationality revoked by the British government without any evidence presented against him.”

“Tox has been detained by HTS secret police. I hope they understand how much Tox has endured in his efforts to help the people of Syria and that they return him to his family at once.”

Born and raised in London, Sharif moved to Syria in 2012 with his wife, Racquell Hayden-Best, to be involved in aid work in the war-torn country.

“We chose to come to Syria because of the gruesome scenes that we were seeing on our television screens.” [8]

Sharif and his wife made their home in a hut near the Turkish border helping to run a refugee camp and two Islamic schools in northern Syria, raising funds via their organisation Live Updates from Syria, with over 230,000 followers on its Facebook page. [9]

Sharif has always denied links to any armed groups in Syria. Instead he says his aim is to help the people of Syria with his humanitarian organisation that employs around 200 people and runs more than 40 projects across Idlib.

Syria’s eight-year civil war was born out of peaceful protests by Syrian civilians for reforms and changes in the Syrian regime. The latter’s response was one of violence and brutality, which forced the people to take up arms in defence.

In recent months, tens of thousands of innocent civilians fled the Idlib province in Syria after airstrikes and bombings by the Russia-backed regime forces intensified. Idlib is currently the final remaining area of Syria under the control of Syrian opposition fighters.