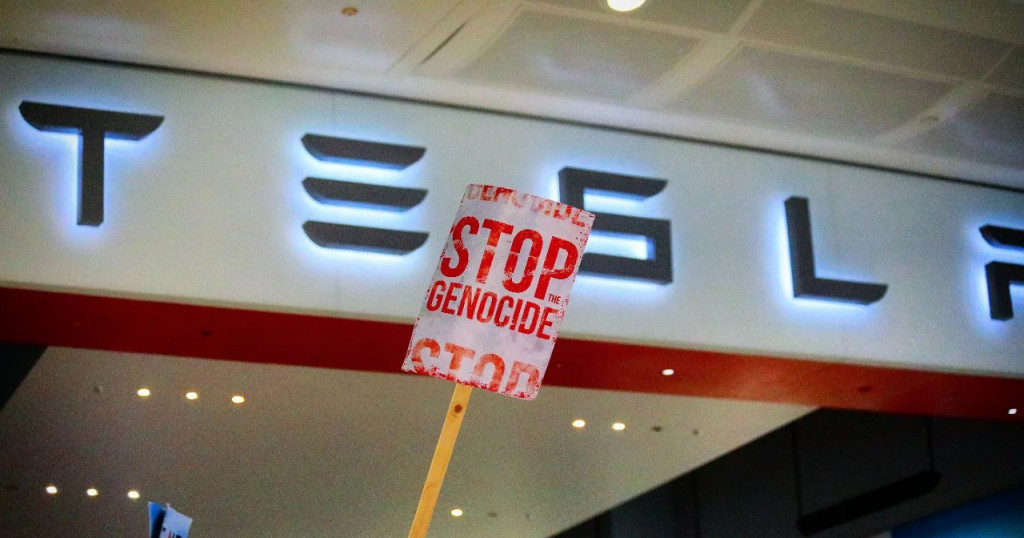 Saturday’s demonstration at the Westfield London showroom of electric car manufacturer Tesla has reiterated the deeply negative energy felt by many towards multibillionaire Elon Musk’s indifference to the Uyghur genocide. Musk, who is a cofounder of the 2003-established electric vehicle and renewable energy behemoth, remains the CEO and majority stockholder at the company with 23.1 per cent of total shares. The car manufacturer was delivered a proverbial electric shock as protestors stood outside one of Tesla’s key UK showrooms on Saturday afternoon, with Islam21c’s Chief Editor Dr. Salman Butt in attendance. Placards were held, calling for an end to the Uyghur genocide as well as raising awareness for the ongoing Stand4Uyghurs campaign, which has been driven by Islam21c. [1] [2] [3] [4]

You are a clever man, @elonmusk
Don’t profit from or greenwash genocide, put @Tesla on the right side of history. We stand with Uyghurs #Stand4Uyghurs pic.twitter.com/6nK24tUrm0

“Your misguided expansion into the Xinjiang Uyghur Autonomous Region sets a poor example and further empowers the CCP at a fraught moment.” [5]

Blumenauer and Pascrell further added in their joint letter:

“We are dismayed that Tesla has reportedly opened a showroom in the province that is at the heart of China’s Uyghur detainment in camps and forced labor in factories.” [5]

Today I’ve written to @Tesla boss Elon Musk calling out his engagement in China’s genocide region and pushing him to do more to strengthen our national supply chain. pic.twitter.com/4uUZR0QgRm

Moreover, the weekend protest follows the sharp condemnation of Tesla by the Council on American-Islamic Relations (CAIR) in early January. [6] The company is already well established within China, but as is widely known, the Chinese government is in the midst of a horrific genocide against the majority-Muslim Uyghur populace of East Turkestan (which is referred to as Xinjiang by the Chinese state and media outlets). In a January 3 statement, CAIR National Communications Director Ibrahim Hooper said:

“No American corporation should be doing business in a region that is the focal point of a campaign of genocide targeting a religious and ethnic minority. Elon Musk and Tesla must close this new showroom and cease what amounts to economic support for genocide.” [6]

With the Biden administration taking the helm of US federal leadership in January 2020, there have been numerous substantive actions that seek to punish and/or deter businesses from trading in Xinjiang. Indeed, a groundbreaking statute known as the Uyghur Forced Labor Prevention Act was passed by Congress in mid-December following tumultuous periods of political wrangling within and between the Senate and the House. [7] Despite these executive and legislative measures, the new Ürümqi showroom was proudly announced on the Chinese social media platform Weibo on December 31, in a post that read as follows:

Numerous countries including the UK, Canada, the Netherlands, as well as the US have seen their respective legislative or executive branches of government already declare there to be an ongoing genocide in Xinjiang. Thus, the announcement of Tesla’s brand new showroom right at the very heart of the Uyghur atrocities reflects how little the company appears to care about its corporate social responsibility. [9] [10] [11]

Musk is the world’s wealthiest individual, with his amassed fortune estimated hovering at around 270 billion dollars in January 2022. The scale of his wealth is such that it can be compared to the gross domestic product (GDP) of Pakistan, which has a GDP of 280 billion dollars. Even more startling is the fact that compared to his native South Africa, Musk is worth three times more than the country’s entire GDP. In fact, he hit an all-time high of 335 billion dollars in early November 2021, even once more surpassing the 300 billion dollar mark in early January. It is therefore disappointing that instead of utilising its soft power as a global leader in the electric vehicle market, Tesla chooses to expand its operations directly into the land of genocide – Xinjiang. How are the twelve million Uyghurs expected to have any scope of reprieve when an automobile giant such as Tesla establishes a showroom at their front door? It is unfortunately the case that through its expansion into Xinjiang, Tesla is in effect legitimising the actions of the ruling Chinese Communist Party. [12] [13] [14]