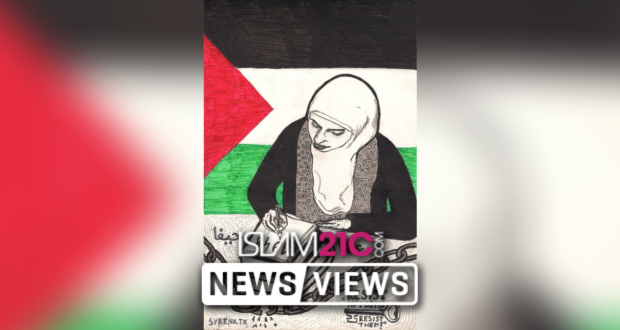 The poem that got Dareen Tatour raided by Israeli occupying forces

36 year-old, Palestinian poet Dareen Tatour, has been sentenced to five months in prison by an Israeli court over a poem. The Arabic piece, written in 2015 urged Palestinians to continue resisting the brutal occupation. Tatour had already served three years under house arrest after first publishing her poem titled ‘Resist, O my nation, resist them’ in October 2015 on her social media profile.[1] During her time under house arrest, Tatour, an Israeli by citizenship was barred from using the internet or from publishing her poems. Tatour’s lawyer, Gaby Lasky, told Al Jazeera,

“It’s regretful that a country that believes in a democracy, will sentence to jail a poet because of a poem that she wrote. The prosecution wanted to send her to jail between 15 and 26 months [but] the judge decided to send her for five months which is still a long time in prison.”[2]

The following is Dareen Tatour’s poem translated into English,

“Resist, O my nation, resist them

In Jerusalem I healed my wounds

And I surrendered my worries to my Lord

And I carried my soul on the palm of my hand

For the sake Palestine, an Arab land

I will not accept the ‘peaceful resolution’

I will never lower my nation’s flag

Until I evict them from my land

And subdue them in a time to come

Resist, O my nation, resist them

Resist the appropriation of the settler

Stopping us from restoring rights

And Hadil, whom they sniped in the open

They killed her in the brightness of day

Resist, O my nation, resist them

Do not listen to (cowardly) tails

Fastened to the frailty of submission

Do not fear the (Israeli) Mirkava

For the truth, in your heart is stronger

So long as you resist in this nation

On her part, Tatour asserted that,“on entering the Israeli court, I kept in mind that it is a court of the occupation. The whole case was politicised purely because I am an Arab Palestinian, who expresses herself in the Arabic language… this is but a continuation to the Nation State bill that was approved (by Israeli parliament) this week, and an attempt to eradicate the Arabic language from Palestine…they mistranslated martyr to ‘vandal’ and portrayed ‘resistance’ as an expression of violence and killing.”[3]

It is noteworthy to mention that the recently passed Nation State law, dubbed a racist law, removes Arabic as an official language and affords exclusive rights to Jewish people including a clause explicitly encouraging and promoting settlements.[4]

Dareen Tatour will serve for a literature piece about resisting an ‘occupier’ and ‘coloniser’ nearly as long as the Israeli soldier, Elor Azaria, guilty of executing Abdul Fatah al-Sharif by shooting him in the head as he lay incapacitated on the ground. Azaria will walk out of jail in May 2019, after serving a reduced nine month sentence.[5]