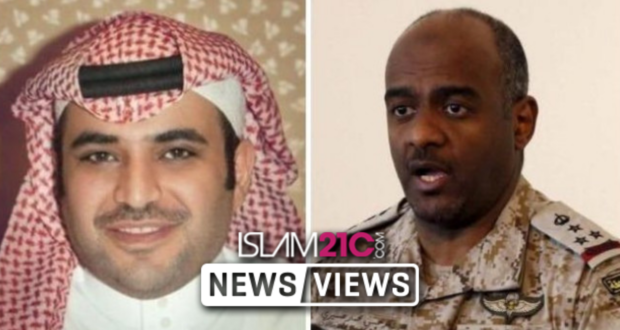 The Chief Prosecutor in Istanbul has filed warrants for the arrest of Saud Al-Qahtani and Ahmad Al-Assiri over the brutal murder of Jamal Khashoggi.[1] Both men are said to be amongst the closest aides to the Crown Prince Muhammad b. Salman, with the former frequently described as his “right-hand man” and who allegedly had regular contact with the death-squad in Istanbul.[2]

In total, Turkey are seeking the extradition of 18 Saudi nationals for their alleged part in the crime, while Saudi Arabia have themselves arrested 21 individuals over the case. However, whilst Saud Al-Qahtani and Ahmad Al-Assiri have been removed from their posts, they are not amongst those under arrest in Saudi Arabia.

“The prosecution’s move to issue arrest warrants for Assiri and Qahtani reflects the view that the Saudi authorities won’t take formal action against those individuals.”[3]

Turkey accuses Saudi Arabia of a lack of cooperation in the case so far, and it is noted that any acknowledgement of Qahtani’s involvement in particular would almost certainly implicate the Crown Prince himself. Only last year, Qahtani tweeted:

“Do you think I make decisions without guidance? I am an employee and a faithful executor of the orders of my lord the king and my lord the faithful crown prince.” [4]

One journalist reported to Al Jazeera:

“The Turkish prosecution believes that these men are only a part of the planning and we understand that the list is not conclusive.

“We understand also that there was a previous request from the Turks to Saudi Arabia to extradite the 18 men they mentioned were involved in the crime but none of that has happened.

“No response came from Saudi Arabia and now there is this specific mention of these two men at the top, but it’s not a conclusive list and they said these men are among the planners, not all the planners.”[5]

The news came just hours after several US Senators launched stinging criticism of both the Crown Prince himself, as well as President Trump’s apparent inaction over the matter.

After a briefing with CIA director Gina Haspel, Senator Lindsey Graham commented: “There is not a smoking gun – there is a smoking saw”. [6] He added that he had high confidence that the Crown Prince was behind the killing, describing him as “a wrecking ball” and “crazy”.

“I have zero question on my mind that the crown prince MBS ordered the killing. If he was in front of a jury, he would be convicted in 30 minutes. Guilty.”[7]

Many in the US Senate are calling for some form of punitive action for Khashoggi’s murder, starting with the withdrawal of US support for the Saudi-led war in Yemen.[8]

“I do believe it is really needed in terms of ensuring what really happened and who are the [people] responsible for that awful killing.” [9]

Whilst Turkey continues to call for transparency and cooperation from Saudi Arabia, it is expected that none will be forthcoming unless continued pressure forces President Trump to act against the very close friend of his son-in-law, Jared Kushner.

2018-12-05
Abdullah Izzadin
Previous: The Aqsa I Saw
Next: [New] Messages to the Muslims from Sh Haitham