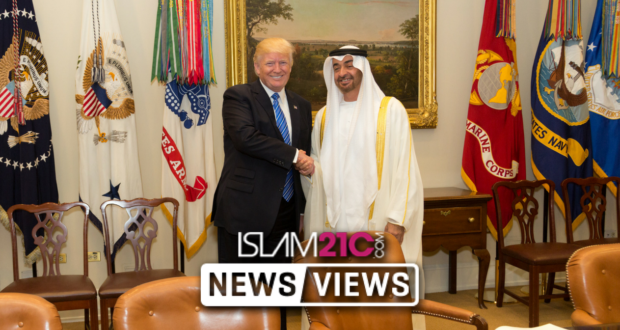 In an incriminating revelation, Vice President of the Islamic Movement inside 1948 Occupied Palestine, Sheikh Kamal al-Khatib has again accused the UAE of paying huge sums of money in an attempt to speed up the Judaisation of Eastern Jerusalem.

“Very close to Mohammed bin Zayed bin Sultan Al-Nahyan, Crown Prince of Abu Dhabi was involved in purchasing homes and estate in the occupied Old City in Jerusalem, namely in the vicinity of al-Masjid al-Aqsa with the help of a Jerusalemite associate of expelled Fatah ‘National Security Advisor’ Mohammad Dahlan…” [2]

“This businessman offered a resident in Jerusalem $5M to purchase his home, one that neighbours al-Masjid al-Aqsa. When the owner rejected the offer, the (purchaser’s) offered price increased to $20M for the same home.”

According to al-Khatib, this purchase attempt failed because “the principled homeowner’s mouth did not water over this filthy wealth,” reiterating previous revelations that had suggested “Mohammed bin Zayed’s regime in the UAE was complicit in purchasing the homes of Jerusalmites (in Silwan and Wadi Hilwah) in 2014 before transferring their ownership to (Zionist) settlements institutions.”

The Sheikh implored residents of al-Quds not to cooperate with anyone seeking to sell homes or estate to anyone or for any reason, concluding that “the rulers of the UAE are germs lurking in the body of the Ummah.” In an interview with Aljazeera, Sheikh al-Khatib said:

In his response, Dahlan, who lavishes in his Abu Dhabi home featuring plush sofas, vaulted ceilings, chandeliers and an infinity pool, accused al-Khatib of being an “Ikhwani liar”. The aide to George W Bush, chosen to lead a coup against the elected Hamas government in Gaza in 2007, [4] said al-Khatib was “hiding behind religiosity” and launched a scathing attack against Aljazeera network who broadcast the disclosures. Remarkably, Dahlan did not deny the allegations. [5]

It is noteworthy to mention that Sheikh al-Khatib has dedicated his life to the service and protection of al-Masjid al-Aqsa, becoming famous for leading the ‘Murabitū al-Aqsa’ (the Protectors of al-Aqsa). Under this movement, regular convoys are sent to the third Masjid of Islām to liven it with circles of knowledge and I’tikāf (prolonged stays) whilst providing it protection against the incursions of Zionist settlers. Al-Khatib has been repeatedly prevented from entering al-Aqsa and has suffered persecution and arrests. [6]

Palestinians recognise selling their homes to Zionist settlers as a form of high-treason seeing that it facilitates the occupation and Judaisation of the holy land. Only 13% of Occupied East Jerusalem is permitted for Palestinian construction as it is already more or less built up. Regular coerced evictions, home demolitions and appropriation of Palestinian-owned properties occur under the pretext of those properties not having Israeli-issued building permits. [7]

Zionist NGOs that champion Jewish settlement in East Jerusalem receive hundreds of millions of dollars from private donors, and using intermediaries wedged as middle-men to make it look like an ordinary Palestinian to Palestinian transaction, occupy the city ‘one house at a time’. [8] For many, it beggars belief that at least one Arab government is assisting the Judaisation of the Islamic city and facilitating a demographic shift; one that that is likely to have extreme and dire consequences for al-Masjid al-Aqsa.