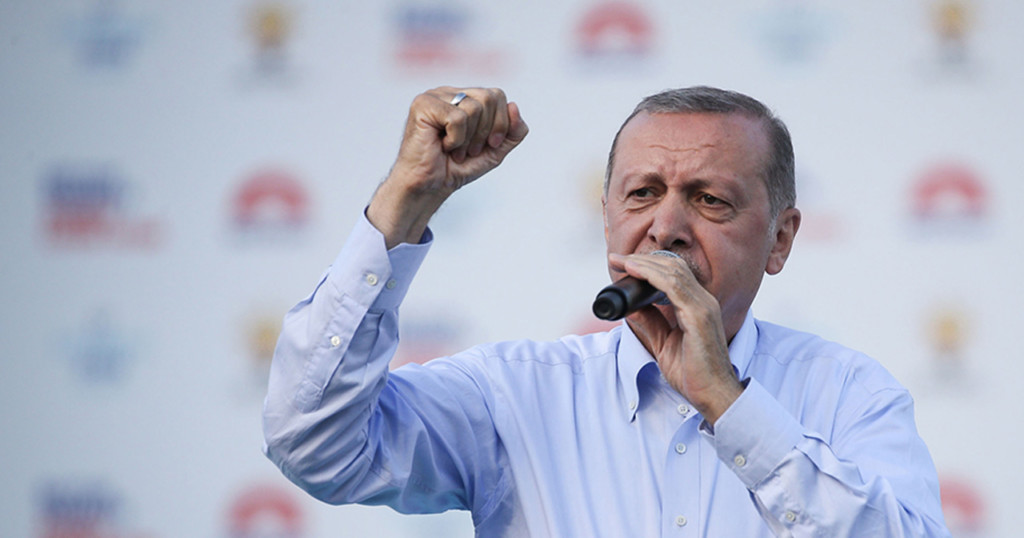 Turkish citizens around the world have begun voting for the nationally scheduled June 24th, 2018 presidential and general election in what will shape a historical turning point for Turkey. Six candidates will compete in the presidential race whilst eight political parties will participate in the parliamentary elections. The elections have been fast tracked 18 months ahead of their original scheduled date following the parliamentary approval of a joint proposal by the ruling AK Party and the Nationalist Movement Party (MHP).[1]

Why is Turkey Voting early?

The July 15th, 2016 coup d’état attempt in Turkey proved that the military establishment was still lodged in the deep state. Until the 1990s, Turkey suffered three coups, deposing democratically elected governments under the guise of protecting the ‘secular state’.[2] It became apparent that for Turkey to become a formidable regional force, capable of overcoming its many local and regional challenges, its old system wedged in the military establishment needed fundamental reformation.

On the 16th of April 2017, the Turks determined whether their then constitution was fit for purpose and whether they would back a monumental shift in the government structure.[3] The proposed constitutional changes included separating the President of Turkey’s office which includes the ‘executive branch’ from the parliamentary ‘legislative branch’, giving the President of Turkey the authority to issue ‘decrees’, becoming both Head of State and Head of Government.[4]

The proposed reforms outlined that the President will preside over a higher degree of jurisdiction. Over 25 million Turks, more than 51% of the electorate ratified the changes to the constitution.[6] Despite this, analysts have argued that since the constitutional changes were passed in the referendum, the country was governed by a type of a ‘transitional system’ rather than one on the model of the new presidential system.[7]

The main ‘power shift’, moreover, is yet to take place alongside many of the other major clauses of the new constitution that the upcoming elections will bring into force.

Additionally, it is well known that Turkey, a nation that has impressed itself over the past decade as a vigorous Muslim power is at the epicentre of the world’s most volatile region. It is working to become one of the top 10 democracies and economies in the world.[8] Changing international alliances, increased involvement and action in Syria, domestic foreign-backed terrorism culminating in the PKK, YPG and others and the need to address pressing economic challenges are seemingly the main reasons behind the snap polls. Turkey’s leading and most successful party, the AK Party, needs a refreshed mandate from the population and their backing. According to President Recep Tayyip Erdoğan,

“Although the president and government are working in harmony as much as possible, the diseases of the old system confront us at our every step.”6

The elections are the first time parliamentary and presidential elections will be held under the new system. It is a feat that will significantly improve efficiencies in Turkish governmental structures and realign the centres of leadership in the Muslim world, possibly setting it on a course of re-establishing the historical prominence and function it lost in the early 20th Century.

Will Turkey become a Dictatorship?

Many question or allege that President Erdoğan will be granted unchecked powers, becoming a ‘dictator’ as controversially depicted by France’s Le Point Magazine and later defended by President Emmanuel Macron,[9] or even a ‘pugnacious’ (meaning ‘aggressive’) president as the BBC put it.[10]

Fundamentally, this obsessive and rather tunnel-visioned narrative flouts two of the most obvious things; the first is that this transformation uniquely affects the system of government and grants no individual privileges to President Erdoğan specifically, but to the elected Head of State, whether Erdoğan or whoever else may win.

The second is that President Erdoğan joins the race as a civilian contender for the post against five others. And although understandably the favourite, he will compete for the largest share of the democratic mandate of the Turkish people. This is what we call ‘Democracy’, in Latin: dēmokratia, from dēmos ‘the people’ and ‘kratia’ ‘power, rule.’

On the contrary, a militarily dislodging of a ‘Democratic’ system is called a ‘coup’, which, according to the BBC, exclusively in the case Turkey, was described as a time when the “army intervened in politics, seeing itself as the guarantor of Atatürk’s secular republic.”13

Let us for a moment agree with Turko-sceptic media and assume a democracy will somehow breed an autocracy; if the Turks opt to be ruled by a ‘dictator’, why does the West feign sympathy? The play on words in the run up to this election in non-Turkish media has all but clouded the very basics of what is happening in Turkey.

Unsurprisingly, no one will argue that the United States, most of South America, as well as many other African and central Asian nations that govern themselves under full presidential systems are actually dictatorships, so there is nothing sympathetic about this biased Turko-scepticism.

Critics of Erdoğan will go on to ‘prove’ he is an authoritarian by absurdly listing some of the normal privileges presidents enjoy in full presidential systems. They will argue that the model “lacks the safety mechanisms of checks and balances” at it gives the president the power to appoint cabinet ministers, propose budgets, appoint some members of the nation’s highest judicial body, “dissolve the national assembly” and impose states of emergency.[11]

For those who may not be aware, for the last few hundred years our own Prime Minister has enjoyed the power of appointing cabinet ministers, too. The PM enjoys “determining with the Chancellor of the Exchequer, the Deputy Prime Minister and the Chief Secretary of the Treasury…” all effectively appointed by the PM in the first place, to determine “…detailed contents of the Budget.”[12]

As for the dissolution of the national assembly or parliament, according to Article 116 of the Turkish Government’s proposed bill, presidential elections will be renewed alongside any such dissolution.[13]  In fact, much of the coverage in the run up to the election will bank on readers not reviewing the constitutional changes themselves – see notes below for this list.[14]

Do Western Governments have a problem with Dictators anyway?

The careful rhetoric such as: “alarm raised on Turkey’s drift to authoritarianism”, a “dangerous step backwards”, according to the Strasbourg-based Parliamentary Assembly of the Council of Europe (PACE)[15] and how the “presence of police forces in polling stations…could have a deterrent effect on voters”[16] leads us to believe that Europe is genuinely concerned about an abortion of democracy in the Muslim world.

Let us not forget that in 2017, about a week before banning Turkey’s Foreign Minister Angela Merkel inaugurated an industrial ‘megaproject’,[17] with a real democrat and Human Rights titleholder (maybe by its standards): Abdel-Fattah El-Sisi. He also visited Emmanuel Macron in the same year to a ‘warm reception’ and promise of enhanced bilateral relations.[18] El-Sisi did not only thwart Egypt’s only successful modern democratic experiment by climbing to power on the back of a tank, but he killed more than 3,000 people in the process.

In the ‘New Egypt’, there reside over 60,000 political prisoners in dungeons and over 1,000 are missing; for demonstrating for democracy.[19] And yet, European centres of power criticise the Turkish government’s ‘witch hunt’ for detaining tens of thousands complicit in the July 2016 anti-democracy failed coup.[20]

The Council of Europe derides Turkey’s State of Emergency, but does not bat an eyelid that France, ‘the Birthplace of Modern Democracy’, held its 2017 general elections under exactly the same circumstances.[21] Europe had no qualms in signing mega-deals with the Saudi Arabian Crown-Prince who could not possibly be described as a democrat and is no stranger to mass incarceration. Billboards advertising the Prince’s policies of ‘empowerment’ and ‘openness’ blanketed London,[22] and the same magazine that decried President Erdoğan as a ‘Dictator’, dedicated its front cover to his tribute. Titled: ‘Le prince qui peut tout changer’, the cover was projected on electronic billboards at the Charles de Gaulle International Airport in Paris.[23]

Europe’s love of amenable dictators or democratic war criminals such as Netanyahu is nothing new. The point, however, is that Europe should come clean on why it is disparaging Erdoğan and Turkey, closing their state-funded Mosques and putting unfair restrictions on their political campaigning.[24]

In reality, it is Turkey’s veering to a more stable and efficient system of government that escapes its rivals’ ability to dislodge the prosperous and characteristically Islamic government that vexes Europe. According to Ahmed b. Rashid b. Saeed, a professor of political media at Riyadh’s King Saud University, the new system will “make Turkey stronger and more stable. This is what frightens Europe.”[25] For the first time, an Islamic leader’s influence on a nation of 80 million will rival the ultra-secularist Mustafa Kemal Atatürk himself.[26] It is a prospect that is encouraging Muslims across the world, and included in this hopefulness are Europe’s Muslim minorities; the ‘Turks’ of old, and the neo-scapegoats of Europe’s socio-economic failures.

In my opinion therefore every Muslim is then left with no choice but to eagerly stand behind Erdoğan and the AK Party. In Turkey we see a hopeful future for Islām, Muslims and all the disenfranchised, oppressed and the defenceless of this world by the permission of Allāh.