Are you ready for our first ever NATIONAL CAMPAIGN?
Home / News / UK Government rolls out the red carpet and begging bowl for Islamophobe Donald Trump 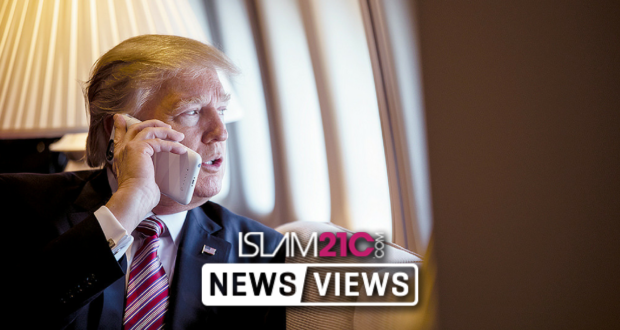 The controversial and unconventional President of the United States, Donald Trump, completed the second day of his UK visit amidst large protests and a giant baby-Trump blimp in the London skies.

Following a state dinner at Blenheim Palace yesterday in which the red carpet was, in actual fact, rolled out for him by Prime Minister Theresa May,[1] he has spent much of today at Chequers with her again, covering a number of topics; not least a trade deal to help post-Brexit Britain and save face for the Tory party and their embarrassing attempts to negotiate their European exit.

In an interview published overnight however,[2] he humiliated his desperate host and took aim at a number of other UK figures, including London Mayor Sadiq Khan; although he subsequently labelled some of the reports criticising May as “fake news”. No denial was made for his comments on Sadiq Khan though, who was criticised for his handling of the terror attacks in 2017 and a rise in immigration. Commenting on the criticism, MP David Lammy tweeted:

I will call it like it is. The real reason Trump blames my friend @SadiqKhan for the terror attacks last year is simple. He hates that London chose a Muslim mayor. The President is racist. He does not deserve to meet our Queen today #StopTrump

His visit has been met with significant protests from representatives across most sections of British society, with the exception of the racist far-right, whom Donald Trump has empowered through his various views on Muslims, women, black rights and migrants.

Why are they protesting?

Trump famously said in 2016 “I think Islam hates us”.[3] Following his election victory, he launched his promised “Muslim travel ban”; a campaign which aims to ban Muslim immigrants and refugees from entering the United States. The controversial order, which targets travellers from 5 main Muslim-majority countries, namely Libya, Somalia, Syria, Iran and Yemen, was labelled Islamophobic and widely criticised by refugee and human rights groups.

Although it was initially ruled as unconstitutionally target a faith and blocked, the Supreme Court recently upheld the ban; a decision met by demonstrators carrying signs reading “No Muslim ban” and “Refugees are welcome here”, but a decision also leaving Muslims in America vulnerable to continued and worsened bigotry.

Trump has also spoken in favour of keeping Guantanamo Bay open and using torture tactics to interrogate Muslim suspects, further displayed by his appointment of Gina Haspel to run the CIA.[4]

During his visit to the UK, human rights activist Moazzam Begg tweeted:

#British PM @10DowningStreet today hosts a man who believes “#torture works”, loves #waterboarding and orders #Guantanamo concentration camp to stay open. We only had one thing in common with this man, but not out of choice: the colour #orange. #TrumpProtest #TrumpBabyBlimp pic.twitter.com/EYWgT7FYR2

In an unprecedented and provocative move which shocked the world, Trump relocated the US Embassy from Tel Aviv to Jerusalem. This decision coincided with the 70th anniversary of the Nakba, or catastrophe, where “at least 750,000 Palestinians out of a population of 1.9 million, were expelled from or fled their homes”.[5]

The decision naturally infuriated Palestinians and Muslims from all over the world and saw demonstrations and protests from various international capitals rejecting the offensive move, but more so emphasising the fact that Jerusalem was, is, and shall remain the eternal capital of Palestine.

His son-in-law Jared Kushner is charged with supposedly bringing peace to the Middle East, but has so far presented a plan which only favours Israel,[6] although his Saudi friends are reportedly urging the Palestinians to accept it in humiliation, showing where Saudi interests lie.[7]

Trump also continues to undermine Middle Eastern stability, having a hand in the Qatar boycott and several deaths in Syria – including at least 28 civilians just today. [8] [9]

Amongst the several other reasons for protests, Trump has been accused of sexual harassment by a number of women and continues to demonstrate his disdain for treating women with the honour they deserve.

Likewise, he continues to speak out against black civil rights movements, such as “Take A Knee” in the NFL, whilst he pays little concern to the underlying causes of such movements, such as cases of police violence against the black community.

Most recently, his policy of separating migrant children, including babies, from their parents has seen even his staunchest and grovelling allies speak against him on occasion.[10]

Trump’s UK visit sparked creativity and activeness from many UK organisations, who welcomed him in true British fashion. Amongst the thousands who protested in Central London, a huge ‘Trump baby – Angry Trump blimp’ was floated around London to represent his ego and petulant attitude. The initiative was approved by London Mayor, Sadiq Khan.

On 12th July, CAGE and Islam21C hosted “Facing off Tyrants”; an event which outlined the principles mankind should adhere to in order to face off tyranny and revive divine justice.

Under the hashtag #DumpTrump, Friends of Al-Aqsa arranged for an outdoor Jumu’ah prayer alongside MAB (Muslim Association of Britain) at Cavendish Square Gardens in London, after which the attendees joined the marches across London.

Tomorrow sees Trump head to Scotland for a round of golf; no doubt with his ego battered and bruised by a truly British welcome, while his British counterpart Theresa May will turn her attention back to her embarrassing “strong and stable” leadership.