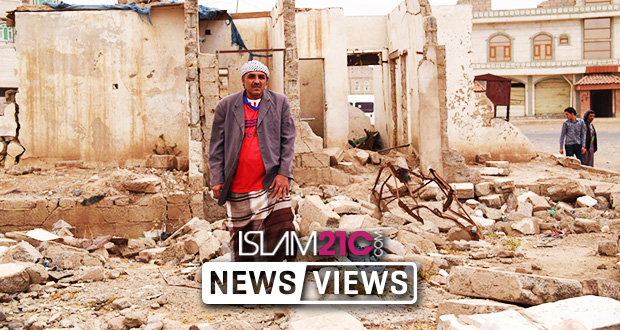 Reports emerged on Saturday that over 55 people have been killed in Yemen following fighting just outside the capital, and another 25 killed along the country’s west coast.[1] Several others are reported to be injured as well, with casualities on both sides.

The ongoing war in Yemen has left over 22 million people, 85% of the population, in desperate need of aid and facing catastrophic conditions, according the United Nations Humanitarian Chief.[2] The country has faced 3 years of civil war, with heavy involvement from regional powers backing opposing sides, leaving the population on the brink of famine.

War broke out in 2014 after Houthi rebels took control of the capital Sana’, which led to a Saudi-led response, backed by the US, to reinstate the internationally-backed government. The intervention portrayed the Saudi Crown Prince as a strong decisive leader, with the apparent expectation of a quick conclusion. However, the war continues many years later in what has become a proxy war. More than 2 million people have been displaced, and over 10,000 killed so far, whilst the poorest nation in the Arab world saw its already-weak economy completely collapse.

“Decision-makers in this conflict perceive concessions as weakness and dissent as a threat. Regrettably, they have consistently taken irresponsible and provocative actions, disregarding the daily sufferings generated by this conflict.”[3]

There is growing international pressure to end Western-support for Saudi’s involvement. Last week a group of US senators introduced a resolution to scale back US support,[4] whilst Theresa May is expected to raise the matter this week when the Crown Prince visits London.[5]

In late January, the Saudi-led coalition announced a $3.5bn aid package to ease the crisis,[6] labelled the “Yemen Comprehensive Humanitarian Operations” plan, but critics have since condemned it, with some suggesting it is a “cynical PR exercise”.[7] The International Rescue Committee (“IRC”) was equally damning, calling it a “war tactic”.

“The name in itself is misleading: it is neither comprehensive, nor particularly humanitarian. The Saudi-led coalition is offering to fund a response to address the impact of a crisis it helped to create. The acute crisis in Yemen needs more than what appears to be a logistical operations plan, with token gestures of humanitarian aid.”[8]

Ethar Relief is one of the main UK charities providing life saving support to the millions affected by the deadly Cholera Outbreak in Yemen. You can help save lives, click here to find out more.