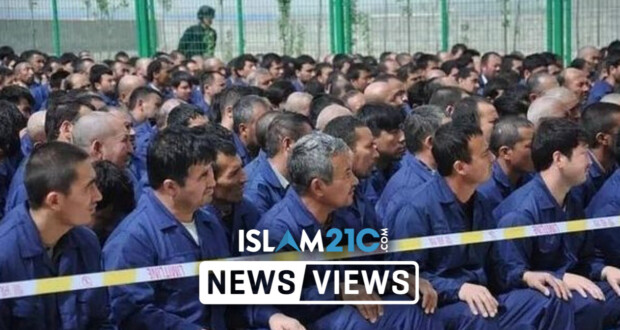 In response to Beijing’s recent draconian legislation in Hong Kong,[1] a coordinated Anglo-American effort over the past week has increased the spotlight on the mistreatment of Uyghur Muslims in China. In addition, an international coalition of civil society organisations and trade unions have called on corporate giants, including Nike and Adidas, to cut their ties with Chinese suppliers who use “forced labour” from detained Uyghur Muslims.[2]

At least 80,000 Uyghurs were forcibly transferred to factories across China between 2017 and 2019, and placed under constant surveillance, with no option to refuse work and unable to leave. After spending the day working, detainees are then compelled to undergo “ideological training” in the evening to remove their Islamic and Uyghur cultural identity.

A recent video, which purports to show the forcible transfer of Uyghurs who appear to be blind-folded and restrained, was filmed during lockdown and confirmed previous concerns that Uyghur Muslim detainees were forced to work and therefore being exposed to the deadly coronavirus whilst much of China, and indeed the rest of the world, sought shelter in their homes.[3] This same video was shown by Andrew Marr to the Chinese Ambassador to the UK on his appearance on Marr’s show on the BBC. The Chinese official could not provide a reasonable explanation of the drone footage.

In addition to Adidas and Nike, international clothing brands such as Zara and Uniqlo have also been implicated in benefitting from forced labour, as more than 80% of China’s cotton is grown in the Uyghur region, and indeed close to 20% of the world’s cotton production is harvested in the same region. The ramifications of these statistics are sizeable, as “almost every apparel and garment brand selling cotton products is potentially implicated.”[4]

Japanese clothing brand Muji has confirmed that it does use cotton from the Xinjiang province, although independent auditors have found “no evidence of accusations of forced labour … at their mills.”[5] Quite how the auditors could be independent or rely upon their findings given the heavy state surveillance in Xinjiang province is open to debate.

International tech giants such as Amazon and Apple have also been implicated in benefitting from forced Uyghur labour in their supply chains. [6] [7] These allegations were first raised in spring this year and have since been echoed by official investigations carried out by the Australian Strategic Policy Institute (APSI).

Despite Apple CEO Steve Cook visiting a plant in Guangzhou in 2017 in which Uyghurs have been forcibly placed, Apple’s response to the recent allegations has been a single-line comment: “We have found no evidence of any forced labour on Apple production lines and we plan to continue monitoring.”[8]

Commentators have suggested that Jeff Bezos, whose net worth is a staggering $171 billion,[9] and Apple, which is worth nearly $1 trillion, should conduct a thorough investigation into the grave concerns and provide robust answers to tough questions about whether their wealth has been acquired on the backs of forced labour by Muslim Uyghur minorities.

Uyghur forced placement into factories across China has been implemented under a government policy known as “Xinjiang Aid”. Under this program, factory owners receive a cash payment for each Uyghur worker ‘employed’. Disturbingly, and with clear echoes of the transatlantic slave trade that many hoped had been abolished to the dark annals of history, some companies in China have advertised their ability and willingness to supply forced labour. One may even call them ‘slaves to order’. One such advertisement claiming to be able to provide 1,000 Uyghur workers aged between 16-18 years read: “The advantages of Xinjiang workers are: semi-military style management, can withstand hardship, no loss of personnel … Minimum order 100 workers!”[10]

ASPI found that hundreds of Xinjiang workers were forcibly transferred to factories such as Foxconn Technology, which is among the largest contract electronic manufacturers in the world and supplies brands such as Amazon, Apple, Dell, Google, Huawei, and Microsoft.[11]

Although some commercial entities may not directly source from Xinjiang, and indeed attempt to use this as a defence, this is not plausible given the widespread nature of forced Uyghur labour across China. The entire supply chain is potentially polluted with forced labour.

“The only way brands can ensure they are not profiting from exploitation is by exiting the region and ending relationships with suppliers propping up this Chinese government system,” said Jasmine O’Connor, chief executive of Anti-Slavery International.[12]

Before the coronavirus pandemic, only four companies in the Xinjiang province were producing medical-grade PPE. However, as the pandemic spread across the globe, that number rose sharply to 51. The New York Times found that “at least 17 of those companies participate in the labor transfer program.”[14]

Many have commented that there is a clear stench of 1930s Nazi Germany together with the horrors of the transatlantic slave trade. International brands, who have all signed up to anti-slavery policies and have legal obligations to ensure their supply chains do not contain forced labour or economic exploitation, must make a decision on which side of history they want to be on. For CEOs dithering about relocating their current supply chain: just do it, already.