[Video] Erdogan encourages unity over division amidst #GCCCrisis in Ramadan 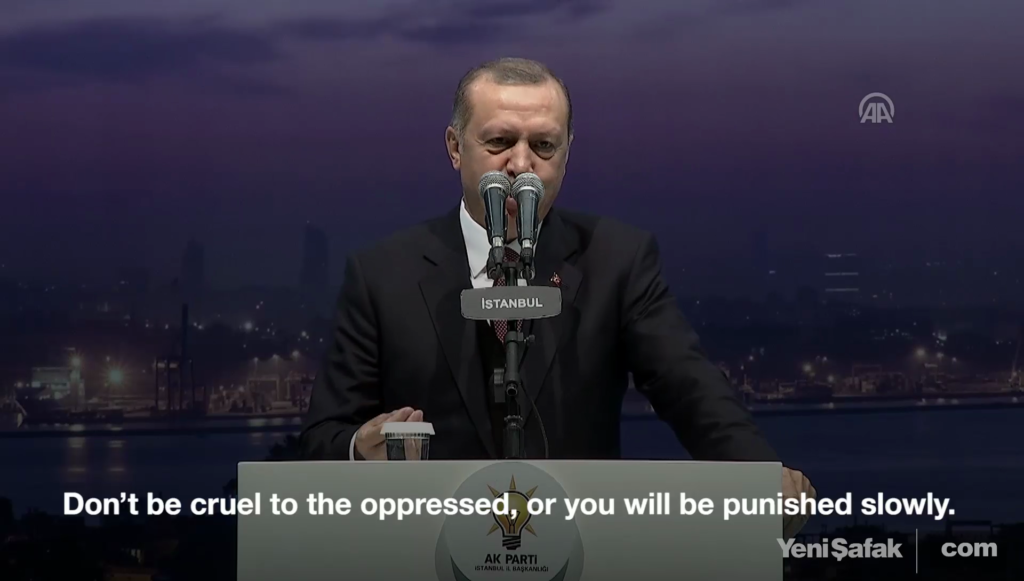 President Recep Tayyip Erdoğan​ made remarkable statements during an Iftar gathering among Justice and Development Party (AK Party) members in the Turkish capital Ankara. He said;

“I want to clearly say that we disapprove of the sanctions on Qatar” speaking against the move by Qatar’s gulf neighbours which had cut diplomatic ties and placed sanctions on Qatar by blocking its land border, aviation and maritime routes.

Turkey and Erdogan a close ally of the gulf states is known to take much care into the security and stability of the region, as such he said;

“These developments, coming at a time when we need solidarity and cooperation more than ever, are no good for any country in the region.”

He called on the ruling AK Party members to “provide support on the path of justice”. Erdogan known for His beautiful recitation of the Holy Qur’an quoted verse 10 of Surah Hujurat to encourage unity over division.

“The believers are nothing else than brothers (in Islamic religion). So make reconciliation between your brothers, and fear Allah, that you may receive mercy.”

Erdogan pleaded with humanity to the Muslim world and otherwise;

In a measured criticism towards the key players in the region who have laid an embargo on the small country, he warned;

“Don’t be cruel to the oppressed, or you will be punished slowly.” Referring to the 249th verse of Surah Baqarah:

“How many a small company has overcome a large company by permission of Allah. And Allah is with the patient.”

“Qatar is a small country. You can’t say; “If you do this, then we will do this.”” In an effort to encourage mercy towards the charitable nation.

Erdogan, Turkey, AK Party and Qatar are known for their concerns towards the Palestinian cause, Syrian plight and many other issues concerning the wider Muslim community across the globe.

Since this speech, AK Party in the Turkish Parliament swiftly ratified a bill to allow Turkish troops to be deployed in Qatar. Turkey and Qatar insist that this deployment is for the regional security and stability of the region, not an escalation towards the nations that have placed the embargo on Qatar. Turkey and Qatar have insisted on dialogue, Kuwait – another state in the Gulf Co-operation Council – has also called for dialogue to resolve this crisis.

Qatar and Saudi Foreign Ministers have insisted that this issue can only be resolved in a GCC setup.

Despite this speech and swift ratification of deployment of Turkish troops in Qatar, Turkey maintains the current presidency of the Organisation of Islamic Co-operation (OIC) in which; Qatar, Saudi Arabia, UAE, Bahrain, Turkey among other Muslim countries are members. A Turkish Airport Operator, TAV has recently inked a deal to operate three Saudi Airports, asserting Turkey’s stance as a mediator.