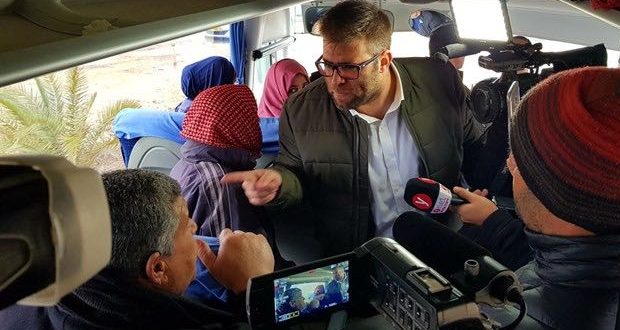 A Zionist Member of Parliament in Benjamin Netanyahu’s Likud Party, Oren Hazan, criticised over fraudulent dealings, involvement in substance abuse, being a womaniser and possessing bigoted opinions,[1] has verbally harassed Palestinian families on board a bus hailing from Gaza on its journey to imprisoned relatives in Zionist jails.[2]

On Monday, Hazan boarded the bus carrying the families, many of whom were aged mothers and fathers about to enter Nafha prison in the south of occupied Palestine. Whilst protected by Zionist police and cameramen Hazan shouted at one of the mothers:

“Your son is a dog. He is a dog. You come to visit the scum who are sitting here in prison, whom you see as your family members.”

The MP who had been kicked out by his own right-wing party for a string of controversies told another mother who seemingly asked him to get out: “I am not going anywhere. I am a Knesset [parliament] member.” The ‘politician’ who lives in an illegal settlement is reported as having said:

“I will make sure that you are not allowed to visit here anymore. We will do everything so that you won’t enter here. You are not wanted here. You educated your son to murder, and we will show your son to the ground.”

Prior to this Hazan was shown waving a Zionist flag which he said was carrying the families of “animals.”

The trips organised by the International Committee of the Red Cross (ICRC) require families of prisoners to go through the gruelling process of applying for permits to enter ‘Israeli’ territory before they can visit their relatives. Of the 6000 or more political prisoners in Zionist jails, approximately 450 are held without charge or trialled on “secret evidence.”

The offending politician also stands accused of numerous sexual and physical assaults, as well as the mocking of a disabled parliamentarian. In response to his harassment of these Gazan mothers, fathers and relatives, Arab-Muslim politician in ‘Israel’s’ Knesset, Ahmed Tibi stated in an address to the Knesset:

“The one who has diplomatic protection and insults the dignified mothers of captives like Um Abdulrahman and her sisters… are worth less than the slippers of Um Abdulrahman. On the next occasion I advise to all whom were on the bus to take your slippers off and to throw it into his face, because if this person were a man he would not be acting tough against the mothers of the captives, but should go and confront the men in the jails who would have shown his true worth; less than any slipper…” Tibi went on to invoke words of poetry ending with: “I am not incapable of replying but no lion goes as low as replying to dogs… the bus continues, so let the dogs bark for through their barking they will never gain superiority over their masters.”[3]

In another reply to the MP’s hooliganism, the spokesman of Hamas’ Military wing, Qassam Brigades, said:

“We say to the enemy, instead of slandering and driving your children to carry out childish acts on the one hand, and of deceiving the families of (Zionist) soldiers with accounts with which to make them oblivious (of their true fate), have the guts to open this folder (of Zionist prisoners)… rather than acting tough against women… You threw your soldiers into Gaza and you left them enter the realm of the unknown. And rather than facing up to reality and acting as honourable men, you chose the way of cowards.”[4]

His words were in reference to the last war on Gaza and the Zionist government’s fear of conducting prisoner exchanges with soldiers believed to be in the resistance’s captivity.

In response to the abuse received by Hazan, the government in Gaza organised a reception for the returning families and distributed awards.