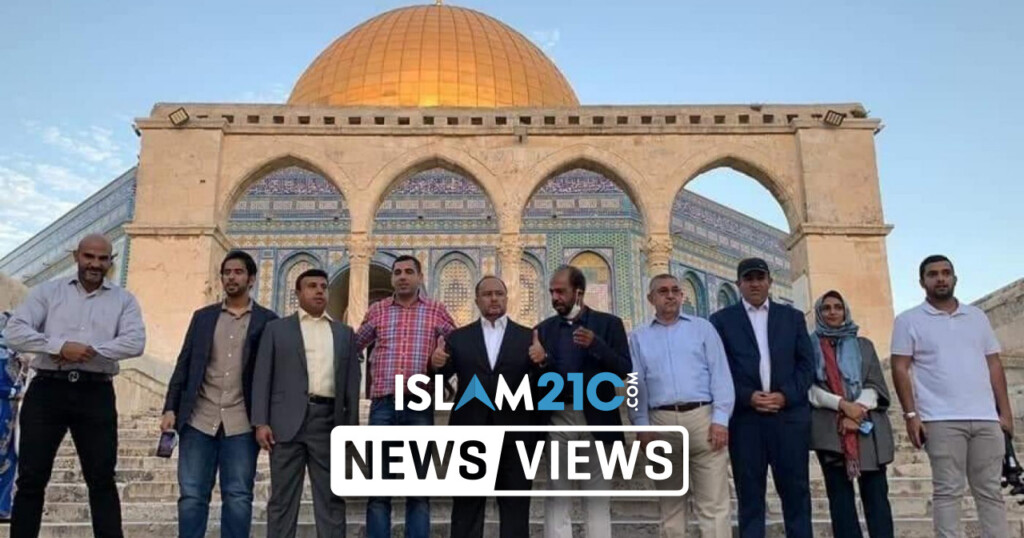 According to reports, an informal Arab group has visited Al-Aqsa under protection from Israeli troops.

Daily Sabah has reported that a delegation from the UAE visited the holy sanctuary in Jerusalem on Thursday. [1]

Meanwhile, Anadolu Agency reported that the group of 10 were a delegation from the Sultanate of Oman.

On the condition of anonymity, an official from the Jerusalem Islamic Waqf told the news agency: “The [delegation], consisting of 10 people, entered Al-Aqsa Mosque through Bab Al-Silsila [one of the gates of Al-Aqsa].”

The official also added that three Palestinians present at the mosque during the inconspicuous visit were detained by Israeli forces, while two others were pushed aside for “expressing their rejection of the visit which they linked to a possible normalization deal” between Oman and Israel.[2]

Similar reports have surfaced of Palestinians forcing a delegation from the UAE to leave the sanctuary in response to the UAE’s normalisation deal with Tel Aviv.

A video posted on the Facebook page of the Wadi Hilweh Information Center shows the moment the delegation, reported to be from the UAE, is kicked out of the mosque after they entered with Israeli police protection. In the footage, a Palestinian man tells the UAE delegation to leave immediately. After a short exchange, the delegation is seen leaving the premises. [3]

In a separate video, the Palestinian man is recorded calling the group “garbage” as they left, rebuking them for normalising relations with Israel.[4]

The recent trend among Gulf states of publicly formalising and normalising diplomatic ties with Israel has been regarded by Palestinians as a religious and political betrayal.

Oman, along with many countries in the Arabian Gulf, have recently exposed softening stances towards the Israeli occupation. The Israeli newspaper Maariv recently reported that Oman and Sudan were in the process of US-sponsored talks with Israel aimed at normalising relations with Israel in the near future.

“Recent days have witnessed great progress in communications between Israel and the Sultanate of Oman, and it was agreed to announce soon a joint statement regarding the decision to normalize relations between the two countries,” the newspaper wrote. [5]

In a statement published by state television in September, the Omani government said: “The Sultanate welcomes the initiative taken by the Kingdom of Bahrain within the framework of its sovereign rights and the Tripartite Joint Declaration on Relations with Israel.”

“The Sultanate hopes that this new strategic direction, chosen by some Arab countries, will be a practical tributary toward achieving peace based on ending the Israeli occupation of Palestinian lands and establishing an independent Palestine with its capital in East Jerusalem.” [6]

Citing Palestinian sources on the ground, the news outlet Arabi21 said the delegation offered their prayers inside the Dome of the Rock Mosque, a 7th century structure not to be mistaken for the ancient Al-Aqsa mosque, which is revered in Islam.

In his analysis, Abdullah Al-Majali from Arabi21 wrote: “The storming by Israeli extremists under the guns of the Israeli occupation does not whitewash the image of the occupation in the eyes of the world, nor does it give it legitimate sovereignty over the Noble Sanctuary of Al-Aqsa. The Arabs’ visit does, however, whitewash the image of the military occupation and is “evidence” that all Muslims can go to Al-Aqsa Mosque. It also shows the world the false image of Israel providing protection for religious sites and allowing religious freedom.”[7]

Reports of the incident also indicate that the delegation guarded by Israeli police conducted their visit without permission from the Jerusalem Waqf, the Islamic endowment managed by the Kingdom of Jordan. The act bypasses the authority of the Jordanian government, which is officially responsible for managing the Al-Aqsa compound.

This marks the first reported official visit since Bahrain and the UAE signed a normalisation deal with Israel last month.

The reports arise as concern grows for Al-Aqsa Mosque since the normalised relations. The sanctuary, historically the capital of Palestine, is one of the three holiest sites in Islam.

Israeli settlers have repeatedly raided the sanctuary and pushed for greater Jewish presence at the site. Israeli police have often facilitated these transgressions in spite of a longstanding joint guardianship agreement between Jordan and Israel, which bans trespassers on the site.

These events have been unravelling as part of a political cascade set into motion by the Trump administration’s inflammatory involvement in the Palestinian–Israeli conflict.

On 13th August, a joint statement between the US, Israel, and the UAE released by President Donald Trump said: “As set forth in the Vision of Peace, all Muslims who come in peace may visit and pray at the Al-Aqsa Mosque and Jerusalem’s other holy sites should remain open for peaceful worshippers of all faiths.” [9]

However, while the statement speaks of peace, the connotations are in reality far more volatile. As has traditionally been the case, terminology surrounding the Palestinian ‘peace-process’ has carried Orwellian connotations of double speak, hiding deeper hostile insinuations.

Khaled Zabarqa, a Palestinian lawyer specialising in Al-Aqsa and Jerusalem, told Al-Jazeera that the joint statement “very clearly says the mosque is not under Muslim sovereignty.”

“It’s a clear and massive violation for the international and legal status quo of Al-Aqsa Mosque [conceived] after the occupation of Jerusalem in 1967, which says everything inside the walls is under Jordanian custody.” [10]

According to Fakhri Abu Diab, a Jerusalem-based activist and member of the Silwan Defence Committee, the recent visit under the protection of Israeli forces conducted without the permission of Jordanian authorities withdraws any recognition of Jordan’s guardianship, with the Gulf states demonstrating their acceptance of Israeli sovereignty over the holy sites and the Al-Aqsa sanctuary.[11]