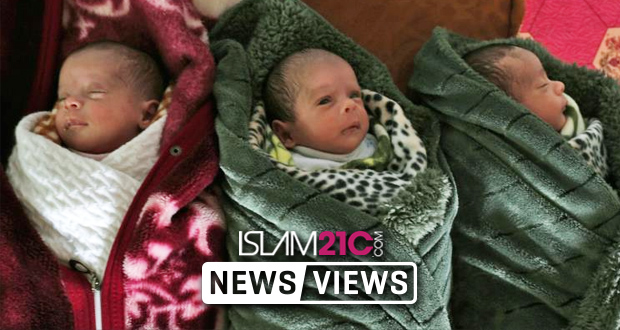 A young Gazan family has protested in its own unique way against US President Donald Trump’s decision to declare Jerusalem as the capital of ‘Israel’.

Just two days ago the triplets were named “al-Quds” (Jerusalem), “ʿAsimah” (Capital) and “Filastīn” (Palestine) as they entered this world to etch a reality confirmed by their very existence.[1]

“Islam”, the mother of the triplets, said: “Alhamdullāh (Praise is due to Allāh) who gave me triplets, so that we can respond to Trump’s decision.” Her husband Nidal al-Sikli added: “Trump’s decision has no value and Jerusalem is our eternal capital.”

The family, who lives in Khan Younis, south of the Gaza Strip, were blessed with two baby boys and a girl. The two boys took the masculine names al-Quds and Filastīn whilst the girl took the name which occurs on the feminine form in Arabic, ʿAsimah.

It is commonplace for Palestinians to name their children with names associated with their cherished homeland and just cause. Of the common names are Nidal (resistance), Nahda (revolution), Yaffa (Jaffa), Iliyā’ (wider Jerusalem region) and Jihād (struggle), to name but a few.

The family remains in dire need of financial help supporting their triplets, especially under conditions of extreme poverty imposed by the now 11-year Zionist- and Egyptian-imposed siege on the Gaza strip. According the economists, the Gazan economy is on the verge of ‘total collapse’ and activists have requested that efforts to transfer money to Gaza are bolstered, initiating the Arabic Hashtag that translated to #transferyourmoney.

The unemployment rate has neared 50% and the humanitarian condition is becoming dire.[2] The UN warned in the middle of 2017 that Gaza would soon become ‘unliveable’, three years earlier than predicted.[3]

In December, the US president announced the implementation of his election promise and decided to transfer his country’s embassy to the holy Palestinian city, sparking a wave of protests in various parts of the world.