Hekmatyar: “If you have the courage and strength, test your power on Russia’s Putin, not on innocent Afghans” 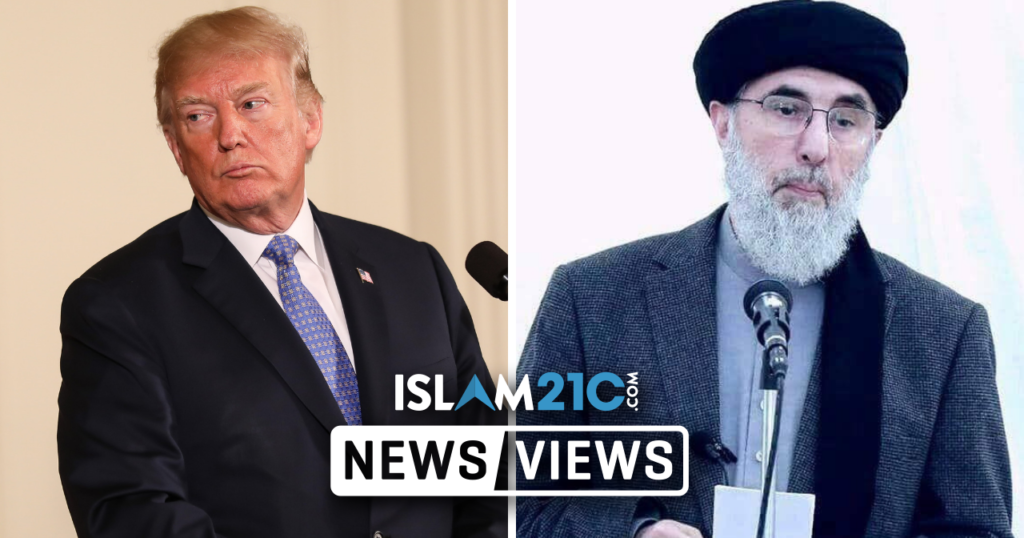 During a press meeting at the White House with the Prime Minister of the Islamic Republic of Pakistan Imran Khan, US President Donald Trump casually mentioned that he had “plans” on Afghanistan that would kill 10 million people. [1]

He told reporters carelessly that his administration was able to win the war in Afghanistan in just one week if he really wanted to, he could wipe it “off the face of the Earth…in literally 10 days.” However, Trump said, he does not want to do that as he does not want millions of people to die.

“I don’t want to kill 10 million people, I have plans on Afghanistan that if I wanted to win that war, Afghanistan would be wiped off the face of the earth, it would be gone, it would be over in literally 10 days.”

“If I wanted to win that war, Afghanistan would be wiped off the face of the earth, it would be over literally in 10 days,” Trump said. “I just don’t want to kill 10 million people.” pic.twitter.com/2h0JTa4ZCY

In response to Trumps comments, the leader of the political party, Hezb-i-Islami, and one of the main presidential candidates in the upcoming elections, Gulbuddin Hekmatyar, told Trump to go and “test your power on Russia’s Putin, not on innocent Afghans”. [2]

He suggested to Trump that if he really wanted to show his strength and flex his muscles, then he should test the US military capability against Russia as opposed to threatening “oppressed” Afghans. [3]

Trump’s comments sparked anger and protests from many politicians and the general public in the war-torn country.

Hekmatyar, a key presidential candidate and one of the most significant figures in the fight against the Soviet forces in the 80s, denounced Trump’s comments whilst addressing thousands of his supporters in a gathering in the capital.

During his speech, the angry crowd of around 10,000 repeated “Death to America, Death to Trump”.

“We ask Mr. Trump that if you have the courage and strength, and you believe in your military power, then test it against [Russian President Vladimir] Putin, and not the oppressed Afghans,”

Hekmatyar went on to mock President Trump in reference to his election victory through alleged Russian interference. He said:

“The same Putin who is said to have meddled in America’s election, enabling you [Trump] to reach the White House to become the president…”

Hekmatyar also criticised the current Afghan President, Ashraf Ghani, and his coalition government for merely seeking a “clarification” from the US as opposed to condemning the US President’s comments.

Hekmatyar is one of the most prominent and influential leaders against the Soviet forces in the 1980s. He is an Afghan war veteran and politician who also shortly served as the Prime Minister of the country in the 1990s.

He is the founder and current leader of the political party, Hezb-i-Islami, which literally translates to Islamic Party, an Islamic organisation that was set up by him and his associates in the year 1975.

His rebel group was considered as one of the most successful in defeating the Soviet army and the second-largest rebel group in the country. [4] It was a group which stood firmly against the Communist Government of Afghanistan and then a few years later against the Government’s close ally, the Soviet Union.

Hekmatyar and his fighters from Hezb-i-Islami also fought alongside the Taliban against US and coalition forces until two years ago when he signed a landmark peace deal with the Afghan government.

The deal allowed for Hekmatyar to return to Afghanistan after two decades in exile. [5] He has since called for peace and reconciliation, demanded the withdrawal of foreign forces, and called on fair and transparent elections.

The United Nations lifted sanctions against Hekmatyar, subsequent to a decision made by the UN Security Council to remove Hekmatyar from the UN ‘terrorist’ blacklist. [6]

In a bid to bring about a peaceful solution in the country, the 25-point pact provided Hekmatyar and his members with amnesty and granted them with full political rights. It also recognised the Hezb-i-Islami organisation as a political party, and allowed for the release of some of its prisoners. As part of the deal, he and his party agreed to accept the constitution, abandon fighting, and to encourage others to do the same. [7]