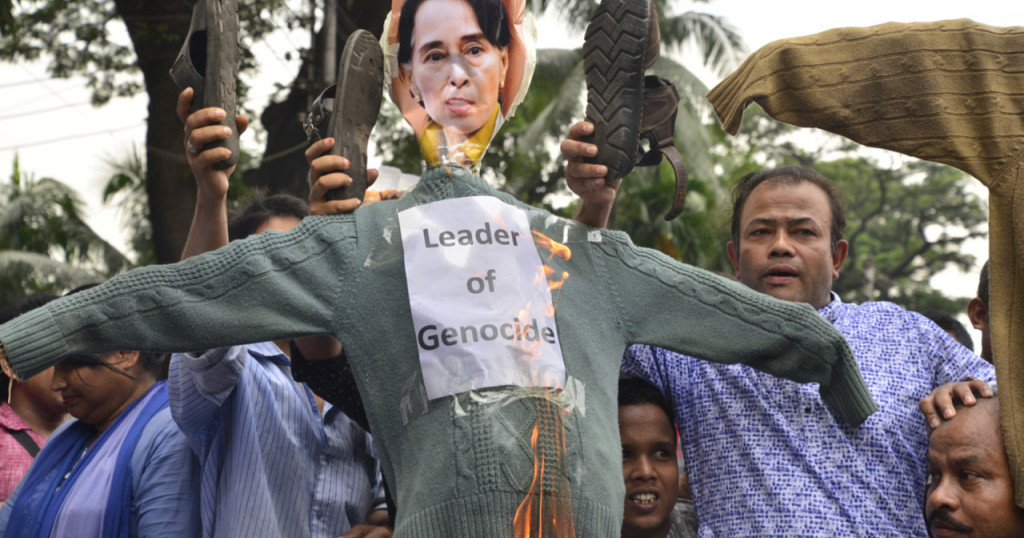 The staunch anti-Rohingya fanatic and former civilian leader of Myanmar has been sentenced to two years in jail, following charges of incitement and infringement of COVID-19 rules. 76-year-old Aung San Suu Kyi, the former de facto head during her five-year tenure as State Counsellor of Myanmar, was sentenced on Monday. The military junta had initially handed down a sentence of four years behind bars. However, the notorious army general and chief instigator of February’s coup, Ming Aung Hlaing, reduced the sentence by half. [1] [2]

Salai Maung Taing San (also known as Dr. Sasa) presides as a spokesman for Myanmar’s National Unity Government, which was put together following the February 2021 coup. He said that the current situation represented a “do or die” situation for the people of Myanmar.

“The people of Myanmar have said enough is enough to these crimes against humanity, these atrocities and is do or die. But the military junta in Myanmar are trying to increase more fear, more pain, more suffering, more deaths, and more destruction, by making all of these show trials. This plays for all of the people of Myanmar to see this happen.” [2]

Dramatic as his statement was, Sasa has previously also called for justice for the persecuted Rohingya of Myanmar. He said in March of this year:

“We will not rest until we bring these military generals into justices for the war crimes, atrocities and the crimes against humanity they have committed against the great and brave people of Myanmar.” [3]

On the other hand, the deposed leader Aung San Suu Kyi was always ineffectual in addressing the Rohingya genocide. Repeatedly, the failed Nobel Peace laureate made matters worse for the estimated two million-strong ethnic group, who largely follow the Islamic faith. The Rohingya hail from Myanmar, despite experiencing hatred from other Burmese communities, the military, and the government.

During her reign as State Counsellor, Suu Kyi did nothing to halt the oppression of the Rohingya. In fact, she is held responsible by many for the mass exodus of a staggering 700,000 Rohingya refugees. This mass number fled to neighbouring Bangladesh after the horrendous August 2017 military campaign in Rakhine state. History will mark 25 August 2017 as a dark day, for it was the date when the Myanmar army launched a horrific crackdown on the Rohingya; tens of thousands were raped, and several other thousands were maimed and killed. One thing is certain: the military action was effective in forcing hundreds of thousands into Bangladesh. There are now around one million Rohingya refugees living in camps in Cox’s Bazar. [4]

Suu Kyi was once lauded for her human rights advocacy, particularly during the fifteen years she spent under house arrest from the early 90s until 2010. Comparisons were even made with the Indian lawyer and anticolonialist Mahatma Gandhi. Indeed, Time magazine glowingly referred to Suu Kyi as one of the “Children of Gandhi” and his spiritual heir to nonviolence in a 1999 issue. [5]

However, following her release from house arrest and the subsequent parliamentary and government positions that she assumed, Suu Kyi has been heavily criticised for her inaction towards the Rohingya genocide. Canada, which had bestowed honorary citizenship upon Suu Kyi in 2007, revoked the honour in 2018. This was after both the Senate and House of Commons voted unanimously to strip the award in light of the government’s determination that the appalling treatment of the Rohingya amounted to genocide. [6]

When The Gambia launched stunning legal action against Myanmar at the International Court of Justice (ICJ) in 2019, Aung San Suu Kyi desperately travelled to The Hague in order to defend her country’s actions. During her remarks, the human rights charlatan did not once mention the Rohingya by name. Gambian Justice Minister Abubacarr Tambadou faced Suu Kyi before the ICJ, and told the court of the “stench of genocide” he had felt during a visit to a Cox’s Bazar refugee camp. [7] [8]

“Military and civilians would organise systematic attacks against Rohingya, burn down houses, snatch babies from their mothers’ arms and throw them alive into burning fires, round up and execute men; girls were gang-raped and put through all types of sexual violence.

“It sounded very much like the kind of acts that were perpetrated against the Tutsi in Rwanda. It was the same modus operandi – the process of dehumanisation, calling them names – it bore all the hallmarks of genocide. I concluded in my own mind, it was an attempt by Myanmar authorities to completely destroy the Rohingya ethnic group.” [9]

Share. Facebook Twitter LinkedIn Email Telegram WhatsApp
Previous ArticleYou Before Me: The Antidote to Individualism
Next Article Arthur Labinjo-Hughes: The Kind of Death That Kills Us All