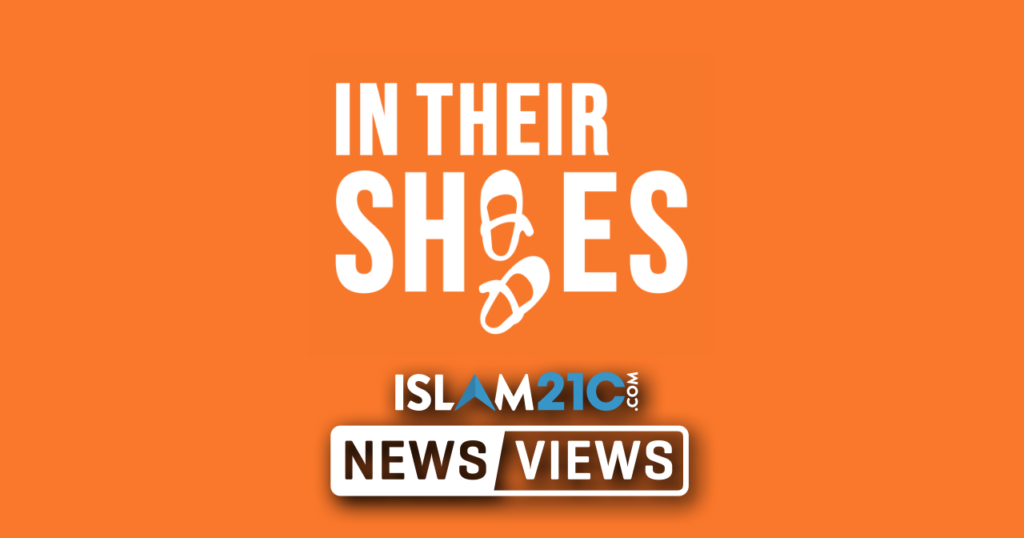 In collaboration with an array of organisations, personalities, and community leaders, Islam21c launched the In Their Shoes campaign this week to combat a worryingly unethical practice that is on the rise in our communities.

Watch the campaign video below:

During the first national lockdown in March earlier this year, there was an increase in reported cases of the anti-Islamic practice of ‘weaponising children’ by one parent against the other in family disputes; denying a spouse or ex-spouse meaningful access to their child without a valid Islamic reason or due process. The Prophet Muhammad (sall Allāhu ‘alayhi wa sallam) said:

“Whoever separates a mother from her child, Allāh will separate him from his loved ones on the Day of Resurrection.”[1]

One of the most fundamental features of Islam’s vision for society is upholding the ties of kinship, particularly between children and their parents, whom they are obligated to treat with excellence. Allāh will not overlook the sin of depriving another believer of their rights without due process (even if a person believes they “deserved it”).

The In Their Shoes campaign sets out to tackle this issue by achieving two clear objectives:

2) To help those who are involved in such disputes find an amicable resolution for all parties, especially the children.[2]

A website for the campaign was created to provide valuable resources, such as legal advice and mediation and therapy services, for those involved in such disputes, which have detrimental effects on children’s wellbeing and future, and greater far-reaching consequences on the future of our Muslim communities as a whole.

By the grace of Allāh and with the support of our collaborators – including 23 mainstream Muslim organisations, five media organisations, and over 120 Imams and community leaders –our united voice was heard by thousands within the Muslim community. Our campaign helped to empower those who were suffering in silence but who now came forward to share their story and receive the help they desperately deserve.

“Alhamdulillāh the response has been overwhelming. So many people have gotten in touch who are going through this problem or know someone who is. Those who have been alienated from their family, harmed, and have even suffered abuse have expressed gratitude and have been able to receive the help they need from the community, Alhamdulillāh. However, this is our first campaign and we really do need people to fill out the survey to help us understand the statistics of the issue more and also give constructive feedback for the future, in shā Allāh.”

Please click here to take part in a short survey to help us make our campaigns as effective as possible, in shā Allāh.

To culminate the campaign week, a national khutbah day was planned to address the topic, but due to the second lockdown, this has been postponed until the second week after lockdown ends, which at the moment is scheduled for the 11th December 2020 in shā Allāh.

We want to have 500 Khatīb across England, Scotland, and Wales participating so that approximately 250,000 Muslims will hear a dedicated lecture about this crisis on the day of Jumu’ah.

We have created bayān/khutbah packs for our national khutbah day in December. If you are a Khatīb or know of one, sign up here to receive an action pack with detailed instructions on what to do sent straight to your inbox.

A Launchgood page was also created for people to support this campaign and help spread the message and bring a halt to this oppressive sin.

I am supporting this very important campaign alongside many Muslim organisations and individuals inshāAllāh. Stay tuned!

https://t.co/6LQcKtP5cJ
Don’t weaponise children. It is Dhulm – oppression. Let them have the love of all of the family members in their lives.

Just because a relationship hasn’t worked out for you, don’t allow this to cause lasting damage to your child. pic.twitter.com/nNRmmj5aO6

Some of the collaborators are:

If you or someone you know is involved in a dispute involving their children, visit the campaign website’s resources page to find recognised bodies that are able to offer psychological, spiritual, and mediation assistance which have your long-term interests at heart.