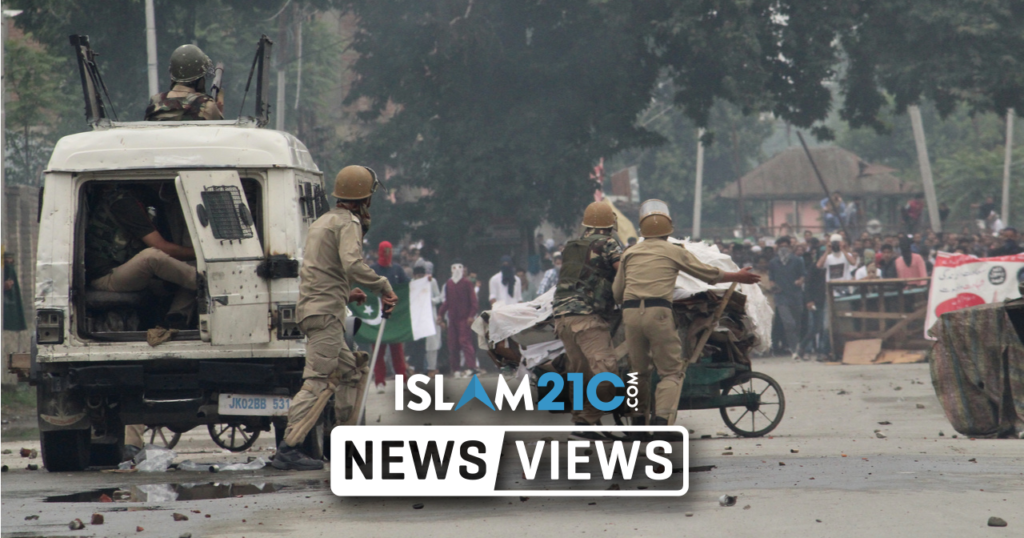 New Delhi remains on edge after three nights of rioting against Muslims. Armed mobs have targeted Muslim homes, shops and places of worship.

Photographs and videos on social media have highlighted the shocking acts being carried out by Hindu extremists as their mobs beat unarmed men with sticks, iron rods and stones.

Yesterday, in the capital a mosque was set on fire as violent protests continued to take place across the city. The death toll has increased to 21 and nearly 200 injured.

On Tuesday, in the Ashok Nagar area of the capital a violent mob shouted the Hindu slogan “Jai Shri Ram” – a slogan that praises a Hindu ‘deity’. The mob paraded around the mosque as it was being burnt down. [1]

Chilling footage went viral on social media showing the violent mob climbing the minaret of the mosque where they attempt to plant a saffron flag. Shops in the area have also been targeted by the mob.

Police imposed a restriction on large gatherings in northeast Delhi as reports emerged of stone-pelting and more structures being set ablaze.

The medical superintendent of Guru Teg Bahadur Hospital, Sunil Kumar, has said that 13 people have died in the violence.

A student from a riot-hit area said that: “Since yesterday, we’ve been calling the police to enforce a curfew, to send reinforcements,”

Senior police officer, Anil Mittal said that around 150 people were injured in the violence that started as US President Donald Trump arrived on his two-day trip to India.

“Some of the people brought in had gunshot wounds,”

These incidents are not the first of its kind. In the past, footage emerged of a 22-year-old Muslim being “mercilessly beaten” and killed by a mob who had tied him to a tree and forced him to chant slogans praising two Hindu ‘deities’. [2]

Other reports include Muslim youth and students being attacked, a Hindu ‘extremist’ mob chanting outside a mosque and threatening to attack it, and a 40-year-old Imām being rammed by a car, all in the name of the same Hindu ‘deity’. [3] [4] [5]

These cases make it evident that this Hindu slogan, which had traditionally been used as a Hindu greeting, is one that is now used to “intimidate” those who worship differently, with Muslims appearing to be a main target. With Modi’s landslide victory in achieving a second term as India’s prime minister, it appears that Hindu ‘extremist’ mobs have used it as motivation to continue their torturing ways.

Under Modi’s rule in the past, the country had seen a rise in ‘extremist’ killings of Muslims. In 2002, for example, he reportedly allowed Hindu mobs to “vent their anger” with anti-Muslim riots during his rule in Gujarat – riots that killed 1,000 people in the process. [6]

Furthermore, after Modi became prime minister in 2014, the country saw a rise in what has been referred to as “cow vigilantism”. This is a term that is given to the violent and hateful Hindu mobs who target and kill human beings in the name of the cow, in which they consider a deity.

In 2018, the way in which the police handled 28-year-old Akbar Khan’s death highlighted how the country’s state and institutions had become “part of the mob”. [7]

The BBC reported a 48-year-old Muslim food stall owner had been forced to eat pork by Hindus who had disagreed with the selling of beef curry. The stall owner, Mr Ali, labelled it as an “attack” on his faith. [8]