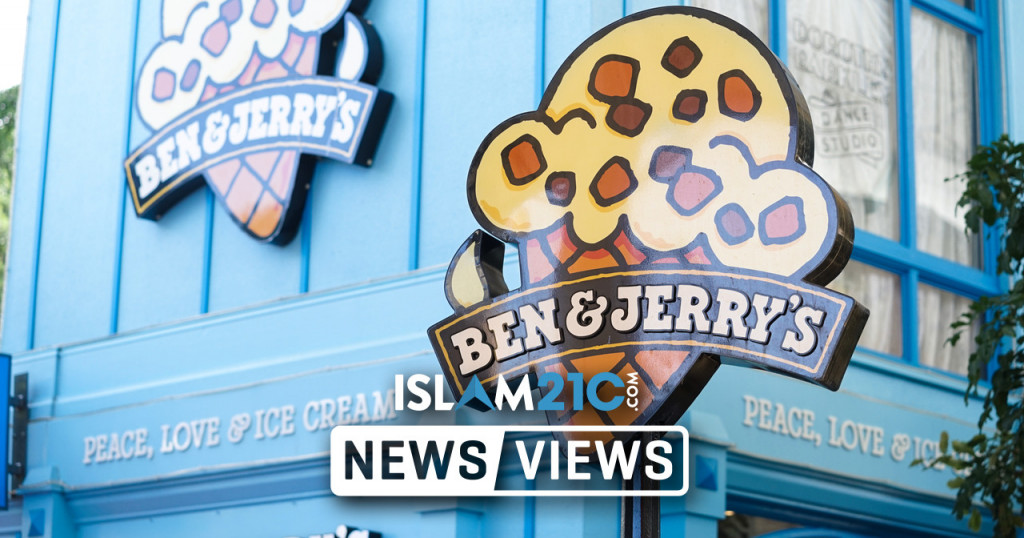 The new hardliner Israeli Prime Minister Naftali Bennett has hysterically lashed out at the ice-cream maker Ben & Jerry’s. This occurred soon after the US-based food processing company declared on July 19 that it would cease operations in the occupied West Bank and East Jerusalem. [1] [2]

In a short and sweet statement issued on the website of the Unilever-owned company, the firm concluded that “it is inconsistent with our values for Ben & Jerry’s ice cream to be sold in the Occupied Palestinian Territory (OPT)”. [2]

The internationally recognised ice-cream manufacturer is known for taking commendable stances on other ethical issues, including Black Lives Matter, climate change, and the rights of refugees around the world. Regarding its most recent position, which was announced on Monday, the firm stated:

“We have a longstanding partnership with our licensee, who manufactures Ben & Jerry’s ice cream in Israel and distributes it in the region. We have been working to change this, and so we have informed our licensee that we will not renew the license agreement when it expires at the end of next year.” [2]

While the company noted that it “will stay in Israel through a different arrangement”, the leader of the Zionist state nevertheless expressed his displeasure with the decision. He warned both the British conglomerate Unilever and its American subsidiary that there would be “serious consequences” due to its decision to leave occupied East Jerusalem and the West Bank.

On the same day that Ben & Jerry’s made its announcement, Bennett issued a harsh response, claiming that the act amounted to a “boycott” against the Israeli population. Furthermore, Bennett’s office declared that in response to the company’s withdrawal, there would be “serious consequences, legal and otherwise, and that [Israel] will act aggressively against all boycott actions directed against its citizens”. [1]

In addition to Bennett’s pretences, Gilad Erdan, the Israeli Ambassador to the United States and the United Nations, is attempting to take a number of measures against the company. In an open letter addressed to 35 US states which have powerful statutes prohibiting any boycott of Israel, the Ambassador urged US governors to take decisive action against the company. In the letter sent to his respective counterparts, the Ambassador explained why he felt strong measures are necessary:

The sheer anxiety found among the chief actors of the Israeli executive branch vis-à-vis the ice-cream maker’s decision speaks volumes of its true motives. Any other nation would have likely engaged in private dialogue and come to an amicable solution.

However, with a state like ‘Israel’, holding such dialogue is impossible once the context of Unilever’s decision is understood. Due to the occupied Palestinian territories being ‘home’ to a staggering 700,000 illegal Israeli settlers, no amount of dialogue can produce a proper resolution. This is because there is no justification for a huge food processing company to remain in occupied lands. Both the occupation and construction of settlements in the Palestinian Territories violate international law, according to almost all actors in the international community.

In Palestine, Wasel Abu Youssef, a senior member of the Palestine Liberation Organization, applauded the decision by Ben & Jerry’s. In an official statement, he delivered the following remarks: “We welcome the decision of any company to stop its work and investments in Israeli settlements.” [1]

Furthermore, the global Palestinian-led Boycott, Divestment, and Sanctions (BDS) movement was upbeat in its reaction to the decision made by Ben & Jerry’s. BDS said the move to cease sales in the occupied territories was:

“…a decisive step towards ending the company’s complicity in Israel’s occupation and violations of Palestinian rights…We hope that Ben & Jerry’s has understood that, in harmony with its social justice commitments, there can be no business as usual with apartheid Israel.” [1]