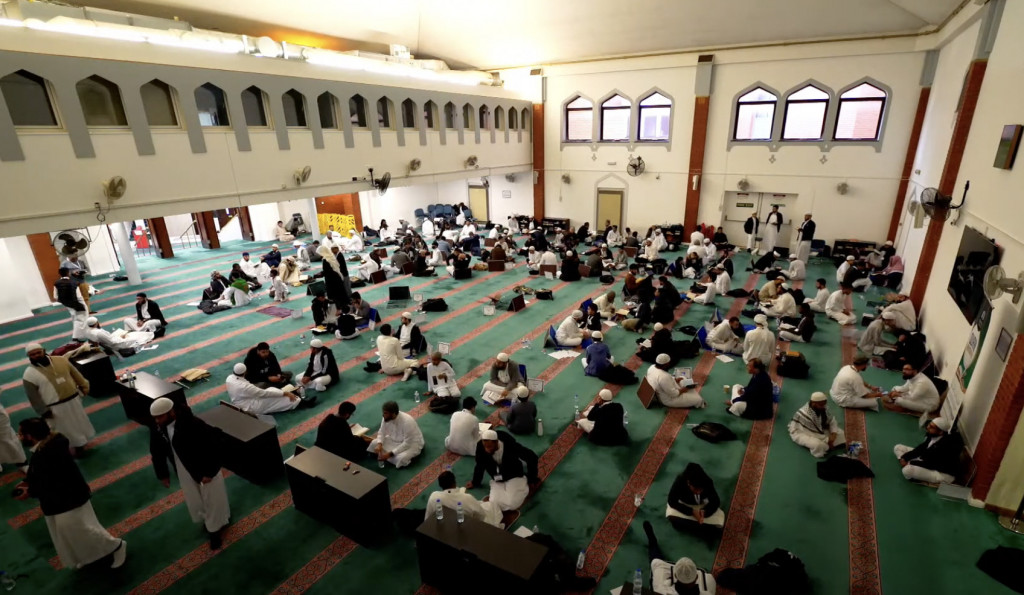 Over 150 aspiring Huffadh and over 50 teachers from across the UK convened in the East London Mosque where a number of chapters, or Juz’, as well as the whole Qur’ān was recited by respected students.

Commenting on the gathering, Shaykh Dr Sajid Umar, one of the teachers, said:

“The scenes are indescribable. They are scenes that breed deep emotion. They conjure scenes of Mauritania and Medina.”

“This is the first time it’s being done in the UK; the brothers doing it were inspired by the Yawm al-Himmah (Day of Aspiration) or Yawm al-Injāz (Day of Great Completion) that we have in Saudi Arabia,” he added.

The gathering is not exclusive to one race or group, rather it is inclusive of peoples from various backgrounds, social groups, and nationalities. The message embodies that of the Qur’ān and our Beloved Prophet Muhammad (Ṣallāhu ‘alayhi wa sallam) itself – that as Muslims we are one nation and one body, indivisible by notions of race, ethnicity, and nationality.

“It really puts you into a special place. You have over 150 Huffādh reciting to over 50 teachers from the UK—and it’s just Qur’ān from Fajr until Isha, you’re only stopping for Salāh, your meals are 15-30 minutes max and then you are back in and it’s full steam ahead.” Shaykh Sajid Umar said.

Throughout the day a number of students completed the whole Qur’ān, a beautiful yet formidable, blessed feat.

The East London Mosque hosted the first session of the Qur’ān Revision Day and it is understood that many more will be hosted across various Islamic institutions in the capital as well as across the UK, inshā’Allāh.

“In the morning when we came there were students and teachers who were tired, having only had as little as two hours’ sleep,” Shaykh Sajid remarked in the late afternoon. “But everyone is still going—the barakah of the Qur’ān and its environment honestly gives you strength.”

“It’s one thing to have physical strength, but it’s another altogether when Allāh sends you strength from the heavens because you are in the service of His book.”