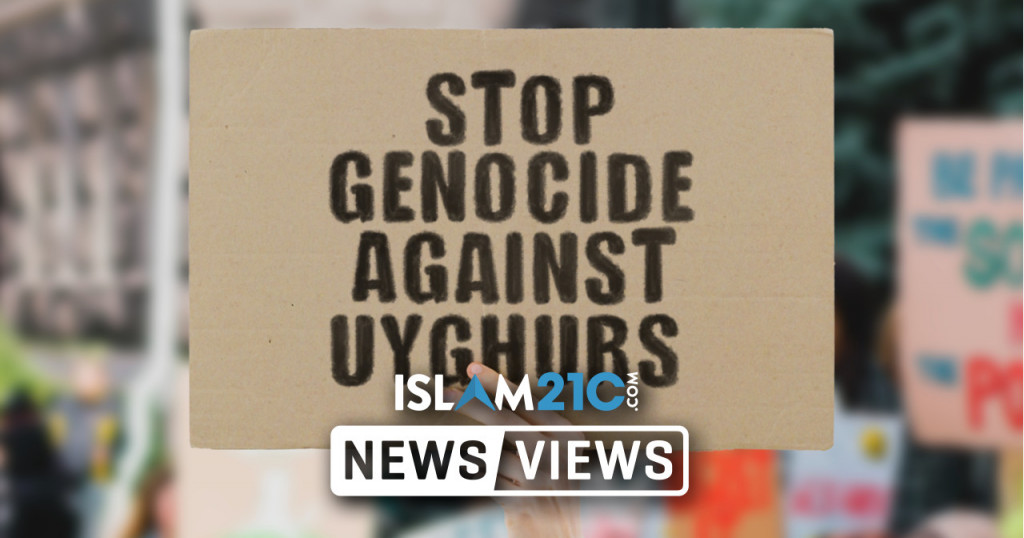 Campaigners in the UK House of Commons are seeking a declaration that the Chinese government is engaging in genocide against the Uyghurs residing in East Turkestan (referred to as Xinjiang by Chinese officials). [1]

Many argue that the Chinese leadership is doing its level best to strip the Uyghurs of their humanity by enforcing practices such as arbitrary mass detention in concentration camps, forced sterilisation of women, brutal torture and sexual abuse of men and women, and exploitation of Uyghurs as slave labour in clothing factories, cotton fields, and tech production plants. [2] [3] [4] [5]

The proposed vote is worded as follows: “This house believes the Uyghurs and other ethnic and religious minorities in the Xinjiang region are suffering crimes against humanity and genocide.” The vote will take place on Thursday 22nd April, and parliamentary organisers anticipate a minimum of two-thirds of members will back the all-party motion. [6]

On the one hand, various countries including the United States, Canada, and the Netherlands have in recent months either had similar motions passed or have had declarations from high-ranking government officials stating the view that the Chinese Communist Party (CCP) has engaged in genocide against the predominantly Muslim Uyghur minority population in East Turkestan. [7] [8] [9]

On the other hand, nations such as Australia have only witnessed attempts by lawmakers to get a consensus on the view that a Uyghur genocide is taking place, with the likes of the independent Senator Rex Patrick drafting a motion earlier in March this year to replicate the motions on the matter that have been passed in the Netherlands and Canada. [10] However, the Liberal federal government of Prime Minister Scott Morrison and the opposition Labor party both came together to block the motion, with Senator Patrick retorting in mid-March:

“It is most regrettable that Coalition and Labor Senators combined to block a vote on a motion that recognises the incontrovertible fact that the Chinese Government is engaged in a campaign against the Uyghur people that constitutes an international crime within the scope of the 1948 Genocide Convention.” [11]

In addition, Senator Patrick made note of the progress made by other countries:

“This grim reality has been publicly recognised by the United States Administration of President Joe Biden, by the Canadian Parliament and the Parliament of the Netherlands.” [11]

In the United Kingdom, members in the Commons have initiated a raft of recent efforts aimed at forcing Prime Minister Boris Johnson’s government to agree that the CCP is committing genocide. These efforts include the recently debated so-called “genocide amendment” of the Trade Bill, which ultimately failed to pass both chambers of Parliament and led to the ire of China being felt by some of the most outspoken members from both the lower and upper houses – namely, the MPs Sir Iain Duncan Smith, Tim Loughton, and Nusrat Ghani, as well as the peers Lord Alton and Baroness Kennedy – who were sanctioned by the CCP in retaliation. [12]

Lord Alton said of the sanctions:

“[China] needs to learn that you can’t silence the whole world and that the first duty of a parliamentarian is to use their voice on behalf of those whose voices have been silenced.”

“I greeted the news of sanctions by reminding myself of some of those who are victims of the Chinese Communist Party’s (CCP) brutal authoritarianism and why silence in the face of this can never be an option.” [12]

China continues to spout the line that countries should not interfere in its “internal matters” any time a foreign nation reports on news of China. For example, when the UK, US, Australia, and Canada released a joint statement in 2020 decrying the deteriorating situation in Hong Kong, the Chinese Foreign Ministry spokesman Zhao Lijian lashed out, saying:

“It is China’s internal affair and no foreign country has the right to interfere.” [13]

In this blessed month of Ramaḍān, whilst we learn of appalling reports that fellow Muslims in East Turkestan have been forced to drink alcohol and eat pork, [14] in addition to being banned from fasting [15], it is easy to feel powerless, but Islam21c have been working hard over the last few months to prepare a nationwide campaign so we can do our part, inshaAllah.

More information on how you can become a campaigner for our Uyghur brothers and sisters will be released soon inshaAllah, but right now we can all take part in this action alert.

Message your Member of Parliament right now to ensure they will be voting for the motion on Thursday 22nd April, by easily visiting https://www.theyworkforyou.com, and get your friends and family to as well.

Help raise awareness by informing family and friends of the situation to which our Uyghur brothers and sisters are being subjected.

Let us remember what the Prophet (sall Allāhu ‘alayhi wa sallam) said in regards to what we can do to combat oppression:

10 things you can do right now for the Uyghurs