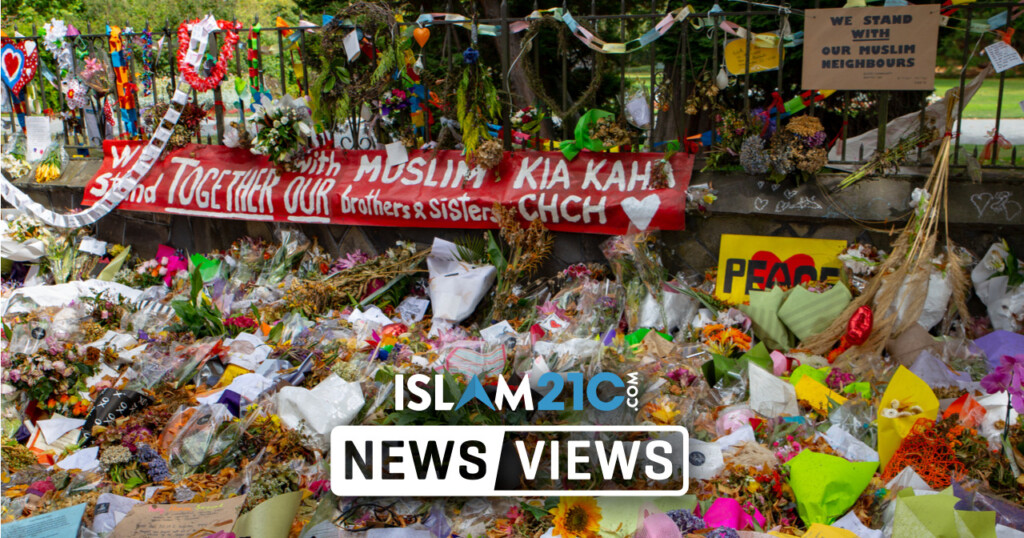 The Pacific country of New Zealand marked the second anniversary of one of the most horrific and shocking days in its modern history.

In a remembrance service held at the Christchurch Arena, hundreds gathered to pay their respects and recollect the harrowing events when 28-year-old Australian white supremacist Brenton Harrison Tarrant launched a violent and deadly terror attack on two masājid during Friday prayers on 15th March 2019. [1]

During the service, Prime Minister Jacinda Ardern said in a speech:

“But while words cannot perform miracles, they do have the power to heal… There will be an unquestionable legacy from March 15. Much of it will be heartbreaking. But it is never too early or too late for the legacy to be a more inclusive nation.” [1]

Going further, Ardern described how “men, women and children … were taken in an act of terror. Words will not remove the fear that descended over the Muslim community…” and that in order to look ahead to the future, New Zealanders should desire to become “a more inclusive nation, one that stands proud of our diversity and embraces it and, if called to, defend it staunchly.” [1]

In total, 51 were martyred and 40 injured in the attacks, which the Prime Minister said at the time could “only be described as a terrorist attack”. [2]

Recounting the horrendous memories of that fateful day in March 2019, Kiran Munir, who was made a widow after husband Haroon Mahmood was murdered in the attacks, described how the family’s lives had been one of love and compassion. Mahmood was looking ahead to the graduation ceremony for his recently completed doctorate, as well as being a model father to the couple’s two young children.

In the shocking events, Tarrant butchered 44 people at one masjid in Christchurch before travelling by road to another masjid, with the intention to take further innocent lives. The al-Noor masjid was the epicentre of the majority of casualties, with the then-recently opened neighbouring Linwood Islamic Centre witnessing the deaths of seven worshippers and a further five injuries.

Following the aftermath of the terror attacks, Prime Minister Ardern was swift in pushing for a ban on semi-automatic weapons and was widely praised for calling the attacks for what they were: an act of terror.

In a reflection of New Zealand’s rich multicultural fabric, of those martyred, nine were originally from Pakistan, five from Bangladesh, seven from India, three from the Fiji Islands, two from Somalia, four from Egypt, three from the UAE, two from Syria, and three from the countries of Indonesia, Jordan, and Kuwait.

Last year, Tarrant surprised survivors and families of the deceased after he abruptly changed his longstanding plea from ‘not guilty’ to ‘guilty’ just over a week following the one-year anniversary of the attacks. In doing so, many who had prepared statements to share in court suddenly found this avenue closed. Nonetheless, others saw the admission of guilt as a bittersweet yet welcome development.

As Ardern said at the time:

“The guilty plea today will provide some relief to the many people whose lives were shattered by what happened on March 15… These guilty pleas and conviction bring accountability for what happened and also save the families who lost loved ones, those who were injured, and other witnesses, the ordeal of a trial. [3]

Maysoon Salama, a mother who lost her son and saw her husband severely wounded in the attacks, expressed a feeling of uncertainty of not knowing what to do with the information after the terrorist Tarrant changed his stance.

Later in 2020, Tarrant received the dishonourable yet wholly appropriate distinction of being the first person in New Zealand’s history to be sentenced to life in jail without the possibility of parole. Judge Cameron Mander was ferocious in his remarks, calling out Tarrant for his “inhuman” actions.

“Your crimes are so wicked that even if you are detained until you die, it will not exhaust the requirements of punishment…” [4]

Undoubtedly, the events of 15th March 2019 sent shockwaves across not only New Zealand but also the wider world. However, Shaymaa Arif, a human rights campaigner who at the time of the atrocities was working as a legal advocate for refugees, said in an opinion piece for Al Jazeera while commemorating the first anniversary of the attacks in 2020:

“The people who live here are settlers on a land soaked in the blood of colonisation. We have been building lives and communities on the DNA of white supremacy for centuries. The pain we, the Muslim community of New Zealand, feel today is the same that our tangata whenua – the Maori term for “people of the land” – have felt for decades and continue to feel today.” [5]

Arif also argued that the terror attack was not as unexpected as the media led many to believe, arguing that it “had been brewing”. Arif described her personal account of having a man gesture “the shape of a gun with his hand, look me and another friend wearing the hijab in the eye, and mime shooting us in the head.” [5]

The human rights activist also drew comparisons to the native population of New Zealand, suggesting, “But it is not just Muslims. Anyone who lives in Aotearoa, the Maori name for New Zealand, knows our history.” [5]