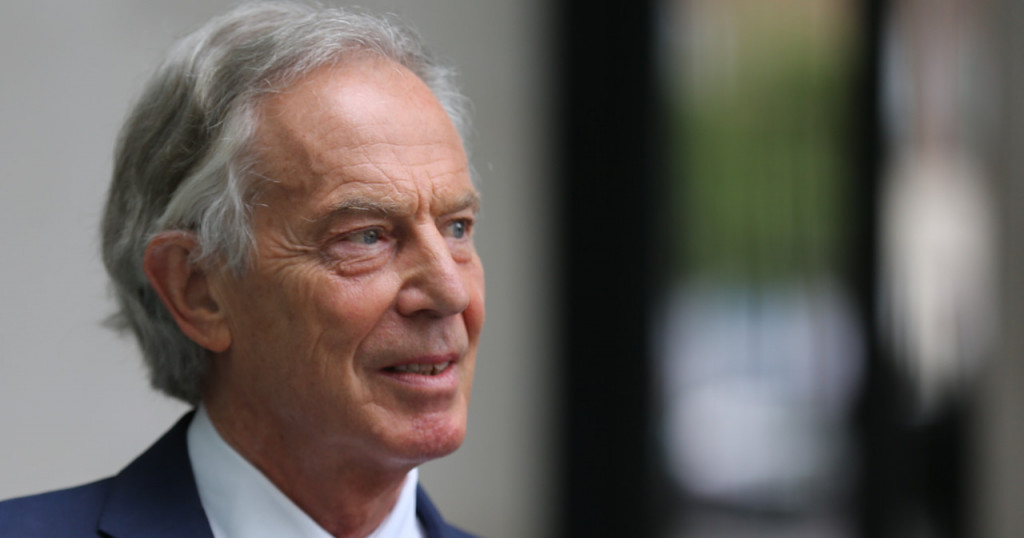 Arise, Sir Anthony Charles Lynton Blair. Buckingham Palace announced on Friday that the Queen had personally appointed the 68-year-old former Prime Minister a Knight Companion of the Order of the Garter in the 2022 New Year Honours List. Following the revelation of this award on 31 December, Blair is permitted to use the formal post nominals KG and partake in a grand annual procession and ceremony at St. George’s Chapel, Windsor, alongside other recipients of the Order. [1]

In reality, Blair remains most widely viewed as a war criminal for his leadership and ultimate accountability for the deaths of hundreds of thousands of civilians during the invasions of Iraq in 2003 and Afghanistan in 2001. [2] The late Archbishop Desmond Tutu of South Africa once called for the criminal trial of Blair at The Hague. In 2012, the stalwart anti-apartheid campaigner argued in a piece for The Observer:

“The then leaders of the United States and Great Britain fabricated the grounds to behave like playground bullies and drive us further apart. They have driven us to the edge of a precipice where we now stand – with the spectre of Syria and Iran before us.” [3]

Blair, the British Prime Minister between 1997 and 2007, has made concerted efforts in the years following his post-premiership to engage in international diplomacy. In so doing, he has shamelessly sought to assert himself as a figure worthy of credence by accepting the position of Middle East envoy for the United Nations, European Union, United States, and Russia in 2007, as well as numerous other advisory roles for heads of state, such as Nursultan Nazarbayev of Kazakhstan. In addition, Blair caused consternation in 2014 upon the release of news that he was set to advise the Egyptian dictator Abdul Fattah al-Sisi on matters relating to business and economic reform. [4] [5] [6]

On receiving the knighthood, Blair lavished praise upon the Queen by stating:

“It is an immense honour to be appointed Knight Companion of the Most Noble Order of the Garter, and I am deeply grateful to Her Majesty the Queen. It was a great privilege to serve as prime minister and I would like to thank all those who served alongside me, in politics, public service and all parts of our society, for their dedication and commitment to our country.” [1]

The former Labour leader has never felt hindered by any sense of moral decency or responsibility. Indeed, in 2007, the announcement of Blair’s acceptance of the position of Middle East envoy came on the very same day of his prime ministerial resignation. Hours after Blair quit as UK Prime Minister, it was relayed that he would take up the diplomatic post of Special Envoy of the Quartet – which refers to the collective group comprising the US and Russia, in addition to two supranational entities, the EU and UN. [4]

Most alarming regarding Blair’s knighthood is the fact that the Queen herself selects recipients of this particular award, which is the highest possible ranking in the New Year Honours List. While the British head of state and Queen of fourteen other Commonwealth realms is said to be politically impartial, her appointment of Blair as a Knight Companion of the Most Noble Order of the Garter has caused anti-war campaigners to voice their criticism. In fact, numerous petitions are already underway to strip Blair of his newly found honour. In one example on the Change.org website, user Michael Jameson has launched an appeal that demands the UK government strip Blair of his knighthood. Jameson calls out Blair for his lies that led to the war in Iraq, which not only caused countless civilian deaths, but also led to the loss of military personnel in conflicts, all of which could arguably have been wholly avoided. [7]

Jameson states in his petition, which has already received more than 15,000 signatures:

“He [Blair] took us into wars that had nothing to do with us. Lied about WMD’s and destabilised the Middle East resulting in turmoil and thousands of deaths of its citizens and hundreds of military deaths. Constantly against everything the government has done with Brexit and the pandemic.” [7]

During his time in government, Blair was accused of having a pro-‘Israel’ bias. In an interview with Vanity Fair magazine, the then Father of the House Sir Tam Dalyell in 2003 accused the Prime Minister of having a “cabal of Jewish advisers” wielding undue influence on government policy. Besides noting that Blair’s Middle East envoy Lord Levy, close confidante Peter Mandelson, and Foreign Secretary Jack Straw all had Jewish ancestry or familial connections, in his criticism Dalyell specifically used the word cabal. The Collins Dictionary defines cabal as “a secret plot, esp. a political one” and “a secret or exclusive set of people”. At the time, Downing Street strongly refuted the MP for Linlithgow’s claim, but the late antiwar campaigner’s remarks have only become more poignant in the years since. Blair has been a public supporter of the lobby group Labour Friends of Israel for many years, and in 2006 was sharply criticised for his failure to call for an immediate ceasefire in that year’s Lebanon War. There were over a thousand Lebanese casualties during the 34-day ‘Israel’-Lebanon conflict. [8] [9] [10] [11]

In a piece published on the ZNet website, Peter Watt suggested that Blair’s actions or inactions were down to the ushering in of “humanitarian” intervention, as opposed to “old-fashioned imperialism”. [12] In an article titled The “Complex” Issue of “Humanitarian” Intervention, Watt criticised Blair by writing:

“A few years ago, the sanctimonious Tony Blair lectured us on the new era of ‘humanitarian’ intervention. Now we would be ‘fighting not for territory but for values,’ he proclaimed. The governments of Western nations, spearheaded by Britain and the United States, in an about turn, had decided that old-fashioned imperialism was simply out-of-date. Enlightened countries could no longer merely oppress, kill and exploit the world’s needy into liberation. They needed to modernise. In the enlightened 1990s military intervention could only be justified on humanitarian grounds. Racism was out, human rights were in. Anything else wouldn’t fit with the vacuous image Blair’s PR team concocted of ‘Cool Britannia’.” [12]

“America’s proxy army in Israel is propped up and armed to the hilt up by the same people who claim to champion peace and democracy. Blair longs for peace, he tells us, but says that it would be wrong to stop the shipment of arms to Israel from the US and continues to authorise the use of Prestwick airport in order to lend a hand in the new arm of America’s war. Blair claims a ceasefire must be achieved soon to stop the suffering but lends his undying support to the war’s principal aggressors. War is peace indeed. As long as this goes on, the message from Rice, Bush and holier-than-thou Mr Blair is that any ceasefire will have to wait…

“Israel, he and Bush remind us, has a right to defend itself. Implicit in this reversal of reality is the view that Palestine and Lebanon don’t possess that same right although the crimes against the two countries, spanning several decades, are incomparably worse. Given that the broader context of the 50 year long Israeli occupation of Palestine – oppression and murder of its people, destruction of its infrastructure, stealing of its natural resources, torture and imprisonment of thousands who have never received trial, cantonisation of its land – is considered irrelevant and cast aside by Blair and the media. Israel merely defends itself from irrational Islamo-fascists. Even is this were true, the vast majority of those killed have been civilians and not members of Hezbollah.” [12]

Blair is now the recipient of the highest order of knighthood, which is personally bestowed by the sovereign. The Queen’s choice in handing Blair such an honour may suggest her tacit approval of his grave actions against Muslims around the world. And why not? Before Syrian dictator Bashar al-Assad’s December 2002 visit to Britain, Blair’s government once considered giving him an honorary knighthood. While the honour was never given, during his visit, Assad had an audience with the Queen and the Prince of Wales. [13]

Sign the petition to strip Blair of his knighthood.