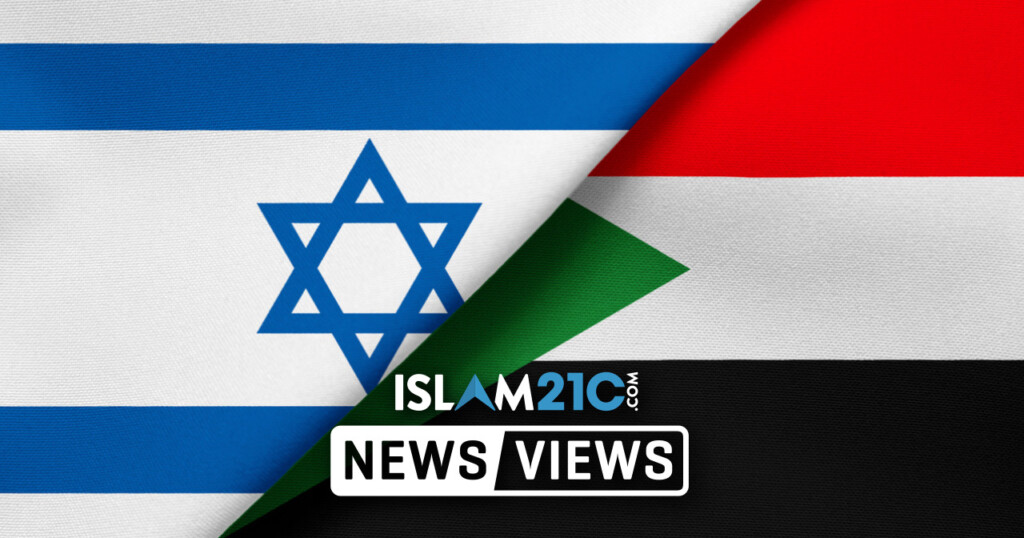 At a critical period in the United States political calendar, with just under two weeks to go until the presidential election, the incumbent president Donald Trump has scored another foreign policy goal by bringing a third Arab country to normalise relations with “Israel”. [1]

Sudan and “Israel” have agreed to open up an economic relationship, but this may very well pave the way to full diplomatic relations in due course. [2] Following the shameless lead of the UAE and Bahrain in the last two months, the deal was sealed by Sudanese civilian and military leaders, the US President, as well as the Israeli Prime Minister over a conference call on 23rd October 2020.

“…agreed to the normalization of relations between Sudan and Israel and to end the state of belligerence between their nations… agreed to begin economic and trade relations, with an initial focus on agriculture. The leaders also agreed that delegations will meet in the coming weeks to negotiate agreements of cooperation in those areas as well as in agriculture technology, aviation, migration issues and other areas for the benefit of the two peoples. The leaders also resolved to work together to build a better future and advance the cause of peace in the region…” [3]

The Palestinians have met the development with outrage and disappointment. Wasel Abu Youssef, a senior member of the Palestine Liberation Organization, was quoted as saying that the agreement was in effect a “serious stab in the back of the Palestinian and Sudanese people.” [4]

With this latest news, Palestine finds itself more and more isolated on the world stage, with a growing number of Arab nations having no qualms about aligning with the terrorist state of “Israel” in hopes of seeking and gaining access to American trade and investment.

Just last week, US Secretary of State Mike Pompeo was pushing Saudi Arabia, the land of the two holiest sites in Islam, to consider ‘normalising’ its relationship with “Israel”. [5] For the time being, Saudi leaders have said they are uninterested in taking the step that others, including Egypt, Jordan, the UAE, Bahrain, and now Sudan, have done.

These recent developments are a great cause for concern in the region, with rapid diplomatic tie-building with “Israel” meaning that Palestine gradually loses what it expected would be its allies. It would seem that the Arab world is beginning to show its true colours; Palestine is not seen to even be in the same sphere as the rest of the Gulf states and Arab nations.

“Israel” is continuing to forge and strengthen relationships with such countries, whilst Palestine gains nothing. It is worth noting that Saudi Arabia established a so-called Arab Peace Initiative in 2002, which was aimed at Arab countries offering diplomatic ties with “Israel” in return for Palestinians being given full statehood and “Israel” withdrawing from all of the Palestinian territory it has annexed since the Six-Day War in 1967. This comprehensive plan appears to have achieved little, if anything, to date.

In light of Sudan and “Israel” deciding to bring about diplomatic relations with one another, it is becoming evident that the Sudanese people themselves are opposed to it. Sudan, led by a transitional government since the overthrow of former president Omar al-Bashir in July 2019, is facing protests for taking the not insignificant step of agreeing to relations with “Israel” when many argue that the transitional government is not qualified or authorised to do so. [6]

Tense times lay ahead in Sudan. The leaders behind the coup that deposed al-Bashir in the hopes of introducing democratic rule are engaging in decision-making that could backfire. With regards to the scale of the rejection of this ‘normalisation’, the leader of the largest political party, Sadiq al-Mahdi (who was also the last democratically elected Sudanese Prime Minister) said:

“This statement contradicts the Sudanese national law … and contributes to the elimination of the peace project in the Middle East and to preparing for the ignition of a new war.” [6]

In a time when the Sudanese leadership is steering in a direction that its own people are opposed to, it is crucial that other Arab states take heed of the dangers of attempting to steamroll through so-called ‘normalisation’ agreements with “Israel” while causing ruptures in the fabric of societies through public protests and associated risks.

One thing is for certain: the Sudanese people are against this farcical agreement with “Israel”, and rightly so. One hopes that if other Gulf and Arab leaders attempt to take a similar line of action, their people will make it known that they categorically do not accept any ‘normalisation’ with “Israel”.