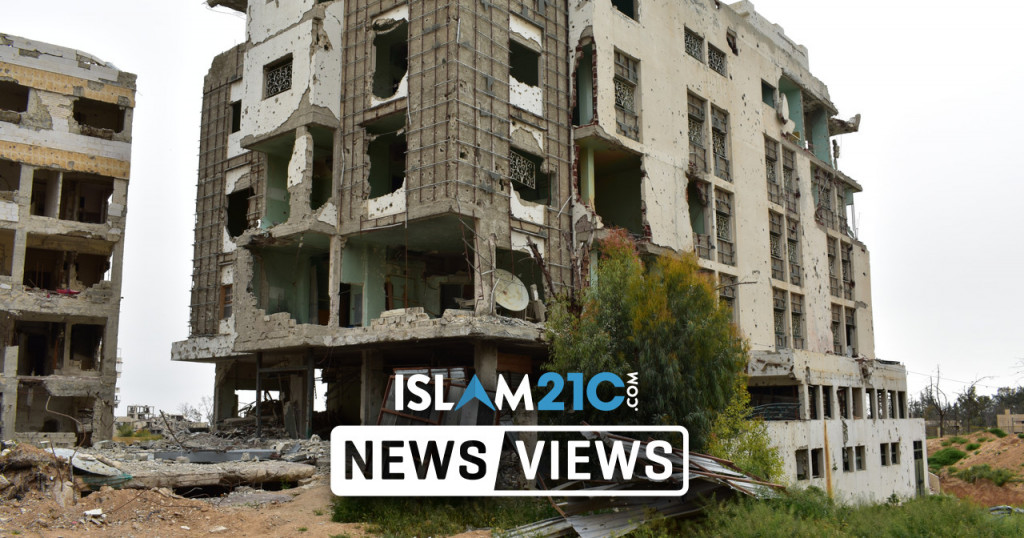 A civilian hospital in the northern city of Afrin was bombed during a series of artillery strikes. A number of civilians, including children, were killed during the indiscriminate bombing of the opposition-held area.

The attacks took place during the late hours of Saturday night and the early hours of Sunday morning. Although a number of areas were targeted during the haphazard raid, the majority of casualties were patients and medical personnel from the Al-Shefa hospital, which had been struck directly. According to the Syrian Observatory for Human Rights (SOHR), 17 civilians, 3 female medics, and a doctor were martyred. Among the civilian casualties, a mother and her baby daughter were killed.

The Syrian Observatory made the following remarks in its press release:

“These people were killed in a massacre committed by regime forces stationed in al-Ziyyarah and Ibbin in the north-western countryside of Aleppo, which targeted several positions in Afrin city. Most of the deaths were in al-Sheffa hospital in Afrin city, which was targeted directly.” [1]

It also made the following statement of caution:

“The death toll is expected to rise further as the attack left over 23 persons injured, some seriously, including women and children. It is worth noting that there were four officials of SAMS and Shafaq organizations among the total death toll.” [1] In addition to the civilian deaths, a commander and two members of the Suleiman Shah faction were martyred.

Officials belonging to the Syrian American Medical Society (SAMS), which helps run the the Al-Shefa hospital and other medical facilities in opposition-held areas, were present during the attack. They confirmed that the centre was hit by two missiles, which led to the destruction of the polytechnic department and a number of emergency and delivery rooms. Two SAMS staff members make up part of the total casualty count, with an additional 11 contributing to the injured list.

According to SAMS, the hospital was one of the largest medical centres in northern Syria, providing up to 1,500 medical services each month. These services included 350 newborn deliveries and 250 specialised surgeries on a monthly basis. The hospital’s coordinates and location were shared with the regime as well as other parties in the region, as part of the UN-led Humanitarian Deconfliction Mechanism.

SAMS provided the following details in its press release regarding the deadly incident:

“The first missile hit the emergency room, and the second missile hit the labor and delivery room. Both units have been completely destroyed, in addition to the outpatient department that was partially destroyed. The hospital has been taken out of service, evacuating patients to nearby facilities. This followed an initial missile strike, at 6:10 PM local time, which hit within 100 meters of the hospital.

“We’re appalled by continued attacks on healthcare. Innocent civilians and health workers continue to pay a heavy price in this conflict. Should any of us accept a world in which simply going to a hospital to deliver your newborn puts your life in grave danger? The international community has an obligation under international law to investigate these blatant attacks and hold perpetrators accountable.” [2]

It is unclear as to who is responsible for the latest round of indiscriminate attacks. For the incident in question, SOHR assigns blame to forces loyal to the regime of Bashar al-Assad. This view is supported by the fact that loyalist units were stationed in the northern countryside of Aleppo province, and have been known to launch mortars and artillery shells from such positions before. The Turkish foreign ministry, however, has accused the terrorist group YPG for being behind the attacks. The YPG is said to be closely aligned with the PKK militant group in Turkey.

In an official statement, the Turkish ministry made the following remarks:

“We strongly condemn the terrorist attacks perpetrated by PKK/YPG/SDF from Tel Rifat today (12th June) targeting Afrin city centre and Syrian American Medical Society-backed Al Shifa Hospital and its emergency unit, where many civilians, including healthcare personnel, have been killed and injured. We wish Allah’s mercy upon our Syrian brothers and sisters who lost their lives and speedy recovery to those injured.” [3]

The foreign ministry continued its condemnation by adding: “PKK/YPG/SDF, which does not hesitate to target with artillery and rockets, innocent civilians and healthcare personnel working tirelessly to serve the Syrian people under all conditions, once again showed its terrorist identity and bloody face.” [3] Kurdish and regime forces, however, are positioned close to one another in Aleppo province, without there being any known hostilities between them. In fact, the two sides have regularly signed pacts and treaties with one another.

Earlier on Thursday, another episode of regime bombing against the opposition-held province of Idlib killed 12 people. The attacks were one of the deadliest in months, violating a 15-month ceasefire.

The city of Afrin was liberated by opposition groups backed by the Turkish Armed Forces in 2018. This occurred after both the YPG and ISIS terrorist groups were defeated and driven out of north-west Syria. Turkey has maintained a military presence in the region since 2016, when it began launching anti-terror operations.

Syria’s decade-long civil war emerged in the aftermath of peaceful protests led by Syrian civilians, who called for reforms and changes in the regime. The Assad regime’s response was one of violence and brutality, which forced the people to take up arms against indiscriminate attacks, killings, and rape.

Over 500,000 people have been killed in the ensuing violence, with many more being displaced. The Syrian regime, with backing and support from its allies in Russia and Iran, has been able to militarily defeat the opposition and its rebel fighters. The Assad regime has been gradually regaining territory which it had lost in previous years.