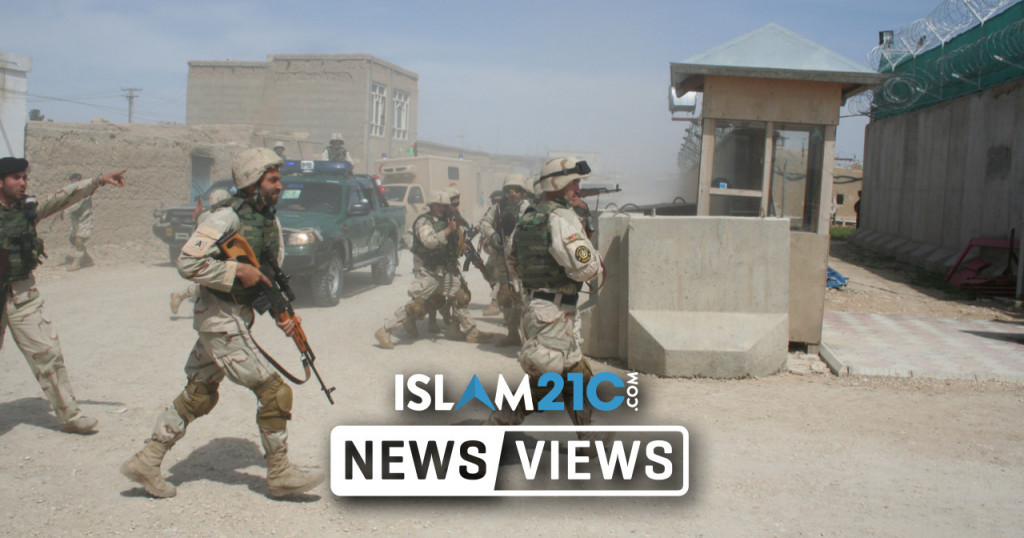 While new developments are continually released at an immense pace in war-torn Afghanistan, in this fierce and bloody contest, the civilian population are experiencing Taliban takeovers of numerous provinces, cities, towns, and districts. The Afghan National Army struggles to counter the surprisingly resurgent armed resistance group’s offensives.

The Taliban retaking Afghanistan in a matter of weeks as September 11th nears is a tragic symbol of the last decades.

Our governments abandoned law to wage fruitless wars, sacrificed our most sacred rights—and trampled the memory of those they claimed to avenge. Was it worth it? pic.twitter.com/TPmXpl7Kdw

Just two days prior, Afghanistan’s second biggest city, Kandahar, was declared to have fallen to the Taliban. The two strategic cities of Herat and Lashkar Gah have also been recently seized by Taliban forces. With the rapid advances made by the armed group, the Afghan army has been struggling to maintain control of numerous areas. Despite their best efforts, the army has had to witness numerous Taliban takeovers. At this point, the group enjoys control of the largest amount of territory it has had in almost twenty years, since the US-led invasion in October 2001. [1]

The impending fall of the capital Kabul has been likened to the US withdrawal from Saigon at the tail end of its Vietnam War in 1975. Senate minority leader Mitch McConnell chastised President Joe Biden for his withdrawal of troops before the 20th anniversary of 9/11 by saying:

“The latest news of a further drawdown at our embassy and a hasty deployment of military forces seem like preparations for the fall of Kabul…President Biden’s decisions have us hurtling toward an even worse sequel to the humiliating fall of Saigon in 1975. President Biden is finding that the quickest way to end a war is to lose it…Without it, al-Qaida and the Taliban may celebrate the 20th anniversary of the September 11 attacks by burning down our embassy in Kabul.” [2]

In a humiliating step, both the White House and Downing Street have been forced to take steps to draft in troops to facilitate the safe evacuation of diplomats and Afghans who supported the US and its allies in the two-decade long conflict. The Pentagon stated that three battalions – or around 3,000 soldiers – would be dispatched. London said it would send 600 troops to support the evacuation of up to 200 British diplomats and existing soldiers.

Press Secretary of the Department of Defense and former Rear Admiral John Kirby discussed the deteriorating situation in Afghanistan. Interestingly, he noted the need for troops to make a hasty return, despite only leaving in April of this year:

“We have been watching very closely with concern the security situation on the ground – and far better to be prudent about it and be responsible and watching the trends to make the best decisions you can for safety and security of our people than to wait until it’s too late.” [2]

Rifts have been opening up between the US and its key ally the UK, as Defence Secretary Ben Wallace openly lambasted the US for its decision to leave Afghanistan. Wallace even went as far as stating: “We will all, in the international community probably pay the consequences of that.” [3]

Moreover, he regarded the agreement that former US President Donald Trump reached with the Taliban as being “a mistake”. [3]

“I’ve been pretty blunt about it publicly and that’s quite a rare thing when it comes to United States decisions, but strategically it causes a lot of problems and as an international community, it’s very difficult for what we’re seeing today.

“I’m absolutely worried that failed states are breeding grounds for those types of people. It’s why I felt this was not the right time or decision to make because al-Qaida will probably come back.” [3]

While fierce gunfights continue across Afghanistan, the Taliban continue to target those who they perceive to be a threat. Toofan Omar, the station manager of Paktia Ghag radio, was shot dead in Kabul on Sunday. Other members of the press continue to be targeted for their news coverage. [4]