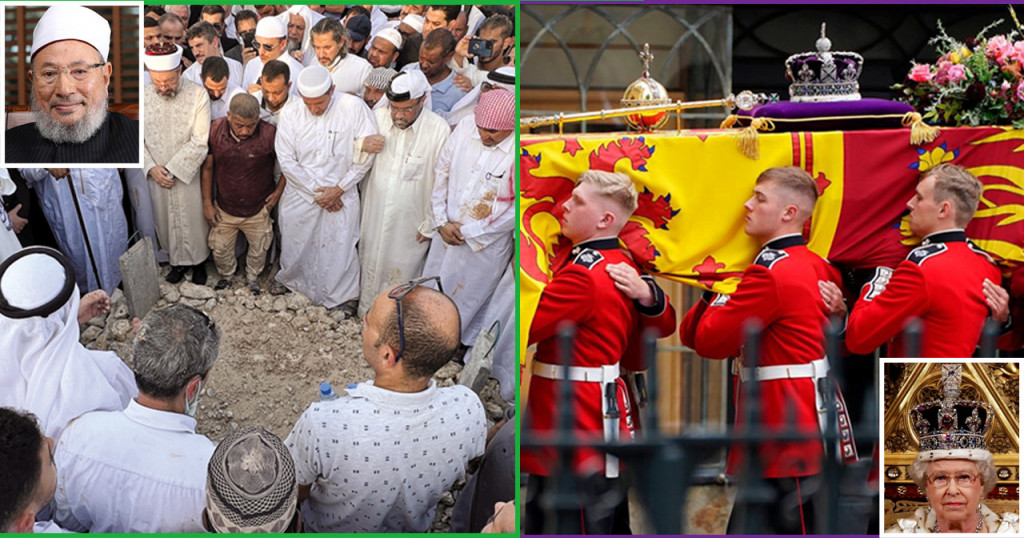 The renowned Shaykh Yusuf al-Qaradawi and Britain's Queen Elizabeth II were both born in 1926 and departed this world in September of 2022, yet lived entirely divergent lives which touched millions.

The first time I met Shaykh Qaradawi, I was too young to truly comprehend his greatness, and yet I was able to recognise that he had a distinct aura, a presence (هيبة) which one could not deny when in his company.

I was fortunate to be blessed with a second and more intimate meeting with the great Allamah, when as a student at al-Azhar in 2010, I was invited to attend a 10-day programme in Doha with him.

Shaykh Salim Sheikhi (جزاه الله خيرا) who had invited me, introduced me to Shaykh Qaradawi. There was nothing distinct about me as a student, and yet, the day after this very brief introduction, I was stunned to hear the Shaykh recall my name, “Ya Hammadar Rahman!”. I was immensely humbled and blessed, and to this day feel honoured by this memory.

I felt out of my depth amongst such erudite scholars who were all there to learn from Shaykh Qaradawi; scholars such as Shaykh Ahmed Raisuni, Shaykh Tareq Swaidan, Shaykh Dedew, Shaykh Salah Sultan, Shaykh Majdi Makki, Shaykh Ali al-Quradaghi and Shaykh Salman al-Ouda — all of whom are giants in their own rights — and yet sat at the feet of Shaykh Qaradawi during this programme, to benefit from his wisdom and teaching.

The programme wasn’t one which invited like-minded scholars; scholars were present from every representation, including the Malikis of Morocco, the Hanafites of Pakistan, the Hanbalis of Saudia and the Shafi’is of Malaysia. The Sufis, the Salafis, the Ibadhis; the right-winged and the left-, the traditional and the progressive — such a diverse cohort indicated his cross-sectional appeal and desire to unite the Ummah.

On one instance, one of the scholars took issue with Shaykh’s opinion on shaking hands with the opposite gender, which he opined was permissible in limited circumstances. The scholar dissenting became passionate in his argument, to which Shaykh Qaradawi responded in Egyptian dialect;

This naturally caused the dissenting scholar to soften his approach, and brought about the tone of brotherhood in the conversation. Shaykh Qaradawi was always able to inspire amicability and gentleness, even during passionate scholarly discourse. He was a murabbi to the scholarly elite from all around the world.

On one morning, Shaykh Qaradawi arrived a little after the start of the programme. Although he wasn’t late, he opted to sit near the students, even at the protest of all who were there. Until his old age, he remained humble and modest, never failing to show dignity and respect to even those inferior to him.

His humility also showed when, during a luncheon where introductions were being made, he did not assume that his audience were familiar with him; rather he introduced himself in the most modest and simple language: “I am your brother, Yusuf al-Qaradawi. I live in Doha and have 7 children.” He continued to speak about his family and children, neglecting to make mention of his countless accomplishments.

The Shaykh’s many accomplishments and achievements were no doubt a result of his rigorous routine, thorough hard work and dedication to the Deen. He would devote many specific hours a day to writing, researching and advising, dealing with contemporary issues from across the globe.

Whilst speaking to him, I noticed that his index finger had a writer’s callus — a raised lump of dead skin cells — due to the repeated friction of his pen against his finger. This callus was as a result of the 200+ books he had authored.

I respectfully asked the Shaykh,

The Shaykh smiled and remained silent, shying away from admitting this.

The next few days we would spend studying critical issues of Usul al-Ijtihād, Maqāsid, and contemporary legal matters under the Shaykh. What was very apparent during the programme, was his unique methodology — one of pragmatism and accessibility — which he described as a combination between the two polarised schools of Ibn Taymiyyah and Imam al-Ghazali. The Shaykh would often reconcile between opposing ideologies and seek to unite the Ummah upon a moderate understanding of Islam. His approach was one of فقه الموازنة, he would find every excuse to be impartial, to validate and give credit to scholars of diverse camps.

One of the attendees criticised Shaykh Qaradawi for citing Shaykh Albani to authenticate a hadeeth in his writings. His response was simply,

Even at the age of 84, his ability to recall nuances of fiqh, his deduction from the Qur’ān and hadīth, and his analysis of the sources were remarkable and had not faded in the slightest. During a discussion, a scholar contended that alcohol was only implicitly prohibited in the Qur’ān (not through an express injunction);

Shaykh Qaradawi skilfully countered, saying that the express prohibition is found in reading the two verses:

The contention was rendered meritless!

During the course of our visit, we were kindly invited to his home where I was inspired by visiting his vast personal library. Having the blessed opportunity to flick through some of the books, I noticed that many of his books were personally signed and dedicated to the Shaykh by notable scholars such as Shaykh Muhammad al-Ghazzali, Shaykh Abdul Fattah Abu Ghuddah, Shaykh Abdel Haleem Abu Shuqqah and Shaykh Abul Hasan Ali al Nadawi, and others.

At the end of the programme was an evening dedicated to acknowledging Shaykh Qaradawi’s scholarship and contributions. Many notable scholars spoke highly of Shaykh Qaradawi, including Shaykh Esam al-Bashir (Sudan), who dedicated a poem summarising Shaykh’s effort and methodology.

After such praise and acknowledgment, Shaykh Qaradawi responded:

As the programme came to an end, his final advice to the scholars can be summarised in two keys points: to have akhlāq and sincerity. Perhaps it’s these two very qualities through which Allah granted him such heights and universal acceptance.

These short-lived ten days provided me with a life-long inspiration and precious memories of Shaykh Qaradawi, the great gentle scholar. Like many, I too dreaded the news of his passing away.

May Allah grant our Shaykh Firdaus Al A’laa and may He be united with our beloved Mustafa and his companions. Ameen.