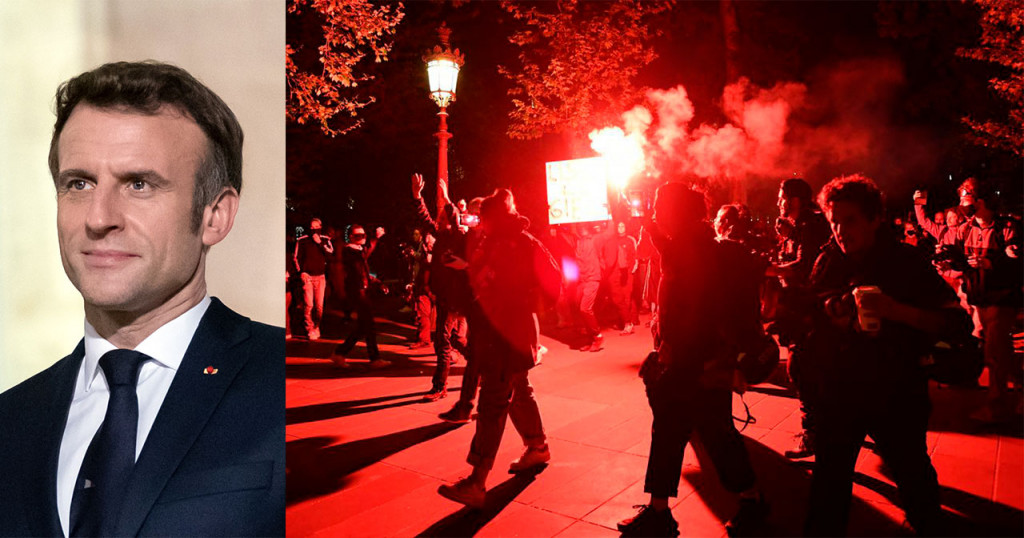 Garnering a comfortable 58.6 percent of the vote, Macron became the first french president to be re-elected in 20 years. However, many of those who voted for him reportedly did so simply to prevent a victory by Le Pen, not because they supported him.

Le Pen, who leads the far-right National Rally Party, received 41.4 percent of the vote, the highest percentage so far of her three unsuccessful attempts at securing the presidency. It also represents the closest the far-right have come to gaining power.

In accepting his victory, Macron acknowledged that many of those who voted for him did so only to prevent Le Pen from victory and promised to heal the many divisions that plague the western European nation, divisions that he has played a major role in creating.

“Many in this country voted for me not because they support my ideas but to keep out those of the far-right. I want to thank them and know I owe them a debt in the years to come,” [1] Macron said.

Though she was defeated, Le Pen claimed her result to be a “brilliant victory” [1] for her party and for those who supported her vision of France which would a be small step up from how Macron is currently governing the state.

“In this defeat, I can’t help but feel a form of hope. I will never abandon the French,” [1] Le Pen said in her speech of concession.

Macron’s re-election, touted across the west as a victory for liberalism and democracy in a time of encroaching autocracy, is certain to continue and raise the anxieties faced by many French Muslims who have suffered Islamophobia, racism and indiscrimination as a result of Macron’s increasingly right-wing policies aimed at appeasing the far-right.

Racist and indiscriminate policies such as banning the wearing of the niqab and ‘burkinis’, the targeting of Islamic institutions for not being ‘French’ and the enforcement of secularist principles on Mosques and Islamic centres have come to define Macron as he seeks to crush France’s ethnic and religious diversity.

Macron’s previous term significantly polarised and divided France and has succeeded in peeling away far-right support from Le Pen according to some, evidenced by Macron’s comfortable victory.

Indeed, at the announcement of his victory, riots and demonstrations headed by leftists broke out in the French capital Paris and other cities across the country, protesting the lack of true choice given to people, condemning Macron’s re-election and the fact that Le Pen, an Islamophobic and xenophobic individual, received just under half of the country’s vote.

The police reportedly used teargas to disperse crowds and the riots reportedly turned deadly as at least two people were reportedly shot dead as they drove towards police in a car.[3]

“Macron and the centre-right win elections by appealing to far right voters/sentiments on race and Islam. In each election they push France further to the extreme right. The Le Pens have gone from being fringe to the mainstream. They have increased their percentage of the vote in each election until now. 42% of French people now support an extreme right candidate. How many people is that?

If this is what a victory against the extreme right looks like then France has a grim future.”