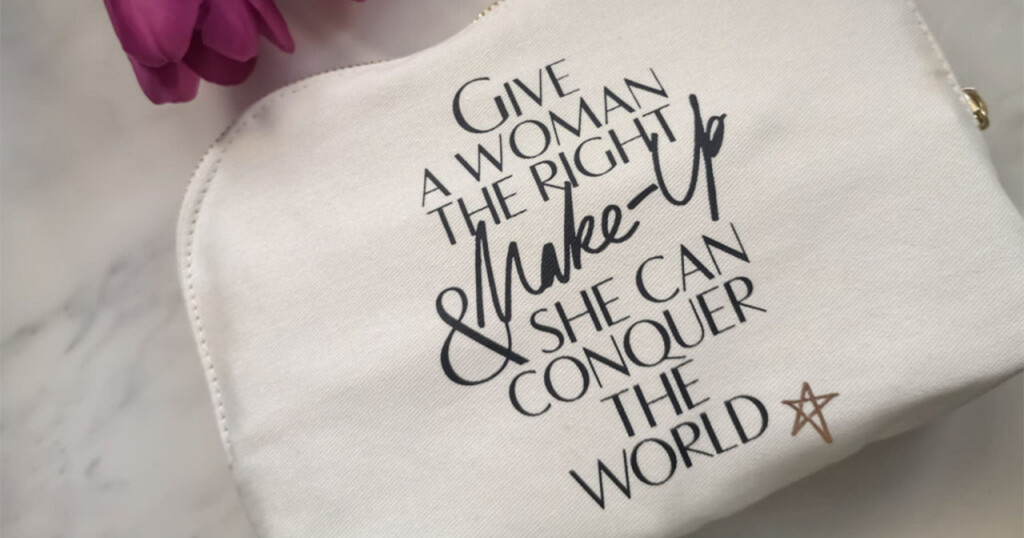 It’s everywhere you go. Every one of us routinely absorbs messaging designed to define who we are, how we are and what we and our lives should look like. You don’t have to seek it out, ideas from advertising agencies, marketing and consumer industries permeate the discursive air that we breathe. Whether questionable, bizarre or downright dangerous, mangled ideas are meted out to every group in society (men, children, working class, ethnic minorities), but today we will take a brief snapshot at the messaging geared towards women and what really lurks in the subtext underneath the shiny veneer.

This line I had the pleasure of perusing on a canvas bag of a tube passenger and the quote itself behaves as Tilbury’s underlying philosophy. A few questions come to mind, what does “conquering the world” look like… and is it even desirable? Is it global political domination, owning a nuclear arsenal so powerful the world cowers in fear of your totalitarian rule? Is it having children who will actually clear every piece of Lego off the floor the first time? Is it finding a free parking spot right next to the entrance? Arguably it’s all that, and more.

Whatever you define it as, women conquering the world is premised on one singular condition: having the right makeup. That’s right, you don’t have to study, skill up, learn or have experiences to shape your character and outlook, you don’t have to serve others or learn life lessons along the way, you don’t even have to worry about perseverance, resilience, or the traditional ingredients to success, you only need have the ‘right’ make up that morphs your outward appearance in the desired direction.

Underneath messaging like this, the underlying premise is that confidence within yourself is directly tied to make up, but not make up itself. Your confidence rests in how successful your make up is in concealing, enhancing, beautifying and increasingly, distorting how you physically present yourself to the world. Reliance on cosmetics is a natural by product of a culture that pumps out unattainable beauty standards to increasingly younger consumers. When the same industries create and then profit off female insecurities, one must question the sincerity of the ‘female empowerment’ narrative that make-up sales come with. Does the right make up help us conquer the world, or keep us in our place as those already conquered?

When the Muslim-owned Boohoo ran an email campaign, the phrase used in the subject line of the email called on customers to “Send nudes. Set the tone with the new season hues”.

Though ‘cheekily’ referring to the nude colour palette for the upcoming season’s trend, the double-entrendre makes light of a harmful social trend that has contributed to anxiety, bullying and in extreme cases even suicides, of young girls who felt pressured to ‘send nudes’.

With a target market of 16-24 year olds, Boohoo knew exactly the message they were sending with their call to action. “Send nudes” has become a common refrain tied to a type of sexual harassment where young girls are pressured to send sexually explicit photos of themselves, to avoid being labelled as ‘frigid’ and ‘boring’. Knowing this culture of sexually pervasive coercion that exists for young girls, Boohoo decided to co-opt a phrase that has lead to sexual exploitation barely covered by the law. As part of a wider social trend of ‘sexting’, if a child feels coerced to send nude photographs of themselves, the person asking may not even face any legal consequences (1) as there is not a clear line between when the request goes from ‘choice’ to ‘coercion’.

The very ‘least’ of the harms for girls sending explicit photographs of themselves includes a degradation of one’s own worth and value, a quest for male validation through a culture of pornification and at worse, falling into the trap of a sexual predator and social disgrace when those photographs are shared without consent and used to blackmail, harass and humiliate a young girl. Another fun fact is that it is illegal for any under 18 to send nude images of themselves to others, and they can be registered as a sex offender themselves for this. (6) The ASA stated that Boohoo’s advert was “socially irresponsible” and in breach of advertising codes on social responsibility towards children. (2)

What are the consequences when this social responsibility is taken lightly?

The tragic case of Canadian teenager Amanda Todd showcases the sadly familiar story of the worst consequences of a young girl who was cajoled into exposing herself on camera to a man she met online. (3) After making a video describing the bullying she suffered both in school and after school, Amanda turned to drugs, alcohol and self-harm that led to suicide. Amanda Todd’s case is not isolated and with the proliferation of social media, photo and video sharing apps the statistics have barely been able to keep up with the phenomenon.

What does this teach us about the messaging girls are receiving, even from mainstream brands such as Boohoo? Caught between insecurities and grey areas of law, teenaged girls are encouraged by the ubiquity of porn’s influence to post suggestive, racy pictures of themselves to peers, strangers or their social media. Worse, they are pressured to engage – as Amanda Todd did – in more direct, self-revealing behaviour online that is then captured forever and can have deadly consequences.

What then about messaging towards women that is not just about appearance, but behaviours?

No doubt, a satisfied smirk formed on the face of the individual in the Nando’s marketing department as they stumbled upon the revelatory fact that both human females and chickens have thighs, breasts, legs and other anatomical parts in common.  To capitalise on this ‘playful’ double-entendre, Nando’s India managed to run a print advert which handed over a casual invitation to sexual assault and “everyday rape” culture that pervades much of society. (7)

“Jokingly” comparing their peri-peri chicken to female anatomy not only positions women as something edible to be passively consumed, but also something readily up for display before the hungry male gaze. To do this in any society is harmful, but it seems particularly worrying to broadcast this message in India where New Delhi has been hailed as one of the most unsafe cities in the world for women and in 2020, more than 28,000 cases of rape were reported across India, an average of 77 in a day, according to a report by the National Crime Records Bureau (NCRB).

As always, experts believe the real figures are much higher as many women do not report such cases due to fear or shame or both. (4)

In an era of #MeToo, conversations around appropriate workplace conduct between men and women, and ever more alarming statistics of unwanted sexual advances, surely it is beyond the limits of humour for advertisers to use straplines such as “Whatever you’re into, enjoying Nando’s with your hands is always recommended” with images of multiple hands vying for the prize on the plate.

What are we being told here? Women are to be enjoyed as the sum of their parts, and each of those said parts are up for public, invasive and joyful advances from men who are encouraged to enjoy the feast before them with their hands.

The messaging is not only endemic, but deliberate and profitable

Extensive research carried out over 15 years on the state of marketing to women forms the basis of the book “Brandsplaining: Why marketing is still sexist and how to fix it”. With 120 ads analysed, and 14,000 women surveyed across 14 countries and 4 continents, findings are predictable yet deflating:

Cumulatively, this does have an effect, and we should not pretend otherwise.

Times like this require a deeper focus on where – as Muslim women and men – our worth really comes from. It requires deeper introspection into who you are, what you are and why you are. Conversations with our sons and daughters need to focus on where our self-esteem is derived from and what the kind of messaging around them is selling them. Understand that as a holistic being, we are composed of our inner spiritual dimensions and outer physical manifestation – and both require maintenance and work primarily as an act of worship, and out of gratitude to the One who endowed us with them.

This is the time to observe what womanhood is reduced to in the public sphere and make an active decision to invest in your health, strength and wellbeing as an act of worship – for your own self and for the pleasure of those who have earned the right to enjoy it.

As a construct, beauty is multifaceted. Though a strong physical component of this is undeniable, what endures is what is lasting. The body is a temporary shell housing a soul that should leave the body carried by angels ascending to the heavens, while the shell that housed it will begin a rapid and grisly process of decomposition to disappear back into dust.

What holds nourishing long-term relationships together is more than physical beauty – the most contented of relationships follow the building of one’s character, that comes from the continual investment in yourself and your relationships with others.

Unplug and engage with the messaging around you on your own terms. Read between, above, under and through the lines of the ideas around beauty and what is being touted as desirable. In a world of conflicting and changing standards, return to the divine standards of the One in whose Hands all beauty is gifted.