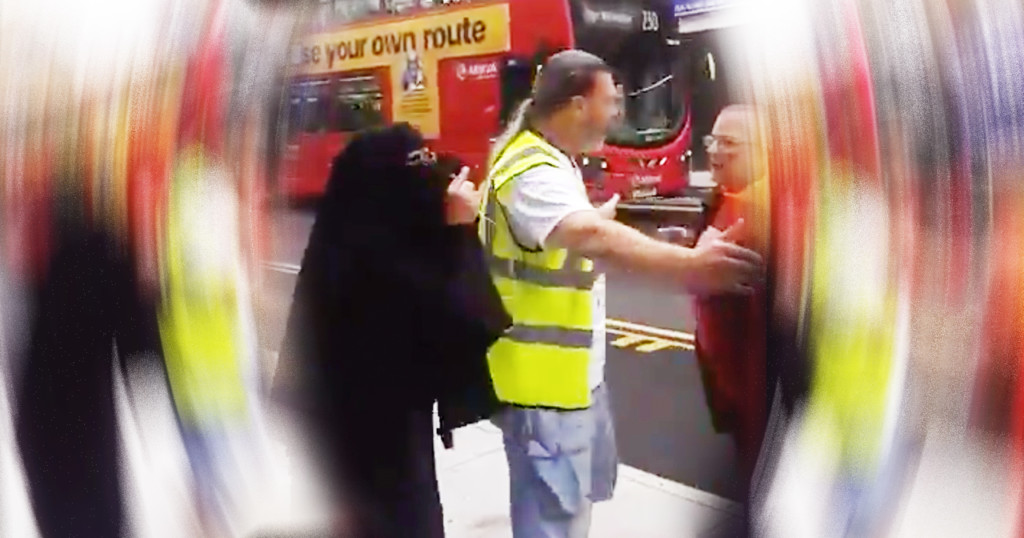 Negative framing and the assumptions that come with it

Disability benefits assessor Dr Macker loses his job after refusing to address a six-foot-tall, bearded man as ‘madam’. [1] Vicar, Reverend, and school governor Peter Hughes of St. Alban’s who described LGBT+ proselytisation at schools as a form of child grooming is pushed to step down as school governor. [2] Nationwide parental rallies against the ‘no outsiders’ LGBT+ programme, evangelised to four-year-olds and above in schools with an uptake of nearly 98% Muslim, [3] are called “mobs” that should be “tackled”. [4]

More recently, a video circulating of a Muslim woman dressed in a niqāb shouting at a member of a Gay Pride rally in Walthamstow created a public furore. Later on, despite alleged eye-witnesses claiming she was harassed and called “scum” beforehand, the woman was arrested. [5]

Beyond succumbing to the social furore, the police may have stoked memories of their bygone incarceration of “gay” activists even in the minds of those activists themselves! The hypocrisy of the alt-right was nothing surprising after the video—which appeared to conveniently begin in the middle of a skirmish—went viral. It is another perfect opportunity to peddle their Islamophobia.

Katie Hopkins blamed the ‘crime’ on the increasing presence of minority groups. [6] Hopkins, who forced her cradler, The Daily Mail, to pay £150k in damages to a Muslim family in 2016 – also in Walthamstow – for inventing a story about that family’s links to al-Qaeda will probably walk away scot-free this time. More disenchanting, maybe, was the audacious reaction of certain Muslims who accused the provoked Muslim woman of being ‘stupid’. If failing to minimally react like some pro-LGBT+ commentators who tried to make sense of the 50-second video, at least assume a standard better than that of Katie Hopkins. According to commentator Colin Wilson:

“I don’t think, for example, that I’ve ever heard of anyone being arrested before for heckling a Pride march – I’ve seen plenty of people do it, but they were generally white, and yet the first person to get nicked is a Muslim woman in a niqab. Would the cops have arrested a Tommy Robinson fan in an England shirt? A nun? And in Waltham Forest it’s even more the case that we can’t choose to side with Muslims or with LGBT people, because the woman was specifically abusing members of Imaan, the Muslim LGBT group.” [7]

The video was sourced from a Muslim counter-extremism practitioner who thought it was his duty to highlight homophobia. The irony in highlighting ‘hate’ by the person is not escaped: counter-extremism in whatever flavour and shape it comes in, presumes a demonised, mainly Muslim identity and is reliant on ‘signs’ – behaviours and symbols – that are used to further deepen the demonisation of the target group. [8]

Whilst the impulse to share an incident with an intention to stigmatise harmful behaviour may have some merit, where the incident is partially informed, it can lead to stigmatisation of an already scrutinised and demonised group.

The responses to the video exemplify this. It seems the War on Terror traits, which has reproduced a McCarthyistic trial by a lack of due process for Muslims, has seeped into the consciousness of society.

Absolutely appalling. It is this woman’s behaviour that is shameful. And an abuse of freedom of speech to harass peaceful protestors in such a hateful homophobic manner. Just heartbreaking to see such spite & hypocrisy. “Treat others as you would like to be treated yourself”…

The mainstream and social media clamour focused on the Muslim woman’s statements and behaviour. Journalists inundated the source of the video with requests to use the video to create stories about how a Muslim woman shouted out the famous Alan Partridge line “Adam and Eve, not Adam and Steve”, bringing this, as well as religious orthodoxy by implication, into the ever-expanding realm of ‘hate’. [5]

Journalists, that body of people who are supposed to ask the questions that probe the assumed, dominant narrative, failed to ask simple questions. Did the Muslim woman start hurling statements at the rally spontaneously? Or were her statements a reaction?  If so, what caused this reaction?  And why is the steward trying to clearly restrain the LGBT+ activist rather than the Muslim woman? The underlying assumption in the blind-eyeing of these questions was that she is Muslim, and a veiled one at that, and therefore in a Muslim versus LGBT+ member situation, the Muslim must be the presumed aggressor. This was enough, so it seems, for the anti-Muslim mob and their journalist and social media allies to proverbially lynch her.

Hi – could we please use this video on the Evening Standard website with credit to you? pic.twitter.com/ZrXmEM48b3

This racist assumption was realised by the police too when the person arrested for potentially committing a public order offence and placed in a cell overnight was a Muslim woman. [9]

The speculative conclusions formed the foundations for ripe Islamophobia. Everything from her religion to the fabric across her face was mocked, blamed and made the subject of legal measures. This, from among the same people who were using the attack on the niqāb by Boris Johnson as political capital to point-score only a couple of weeks ago.

She was a coward, apparently, for covering her face, whilst the one who broke off from a rally, privileged by her semi-celebrity status, backed by the very same mob-like rally, and now the media, politicians, and police, was the victim. [10] What was that about oppressive power structures?

Witnessing this spectacle, I notice the lack of commentary about the Muslim woman’s perspective, how she felt, and why she reacted the way she did. I also witness how the person breaking from the rally has not been arrested and placed in a cell for possible public order offences to “investigate” whether she did something to provoke the situation and potentially cause harassment, alarm, and distress.

Indeed, how many a time have EDL members hurled abuse at Islām and Muslims; how many of these members have been arrested by the police? Deliberately provocative placards against Islām, and other more sinister placards calling for “less Islam”, echoing Douglas Murray’s genocidal call, have been paraded up and down the streets of this country.  Why have there been no arrests under the Public Order Act? Where are the sanctimonious free speech warriors that are normally present to defend these placards now?

Freedom of speech is cardinal when it comes to attacking Islām. Utter “shame on you” and make Biblical references to crowd? Prepare for some unprecedented police action.

What the entire fiasco highlights is the permeation of racist assumptions, including among those who claim to “love all” and promote “inclusiveness”. In fact, the latter increasingly perpetuate a type of tyranny that is coercing Muslims to choose between modifying their beliefs to accommodate their worldview or be made an “outsider” in society. It is a Henry Ford type of “love” and “inclusivity” that is premised on ideological assimilation.

This is not about this specific incident. This is about the persistent and negative framing of Muslims as the aggressor that continues to perpetuate a demonisation of Muslims that fuels repressive and oppressive mechanisms. Be that justice by a pitchforks and pickaxes mob, or coercive ideological assimilation that replicates fascist tendencies.

There is a need for a stronger challenge to these set of dynamics, no matter who—Muslim, non-Muslim, LGBT+ or non-LGBT+—pushes it. Do we want to be living in a society which presumes a group as guilty thereby fanning the flames of Islamophobia? How long can specific narratives remain the preserve of a majority yet double standards employed for a demonised minority? And do we want to accept coercive ideological assimilation that replicates fascist tendencies and pitch-forks, pick-axes mob rule?

These are some questions which must be advanced.