Libya: Another Iraq in the Making? 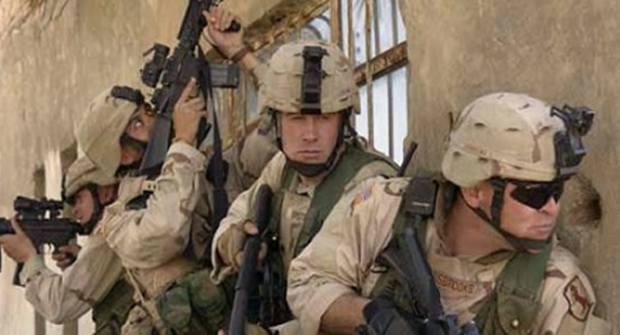 On March the 17th, following continued attacks on the civilian population by Colonel Gaddafi’s regime, the United Nation Security Council (UNSC) passed Resolution 1973 which calls for ‘a ban on all flights in the airspace of the Libyan Arab Jamahiriya in order to help protect civilians’.  It also ‘authorizes Member States to take all necessary measures to enforce the ban’ and ‘to take all necessary measures, to protect civilians and civilian populated areas while excluding a foreign occupation’.

What does ‘all necessary measures’ mean in real terms?  Does it mean pre-emptive strikes to destroy air facilities, communication and defense infrastructure of a sovereign country?  Does it mandate a regime change?  What are the remits and limitations of such an intervention?
Following the first airstrikes and reports of civilian casualties in Tripoli, Amr Moussa, whose ultimate goal is to safeguard the independence and sovereignty of Arab nations, condemned such pre-emptive actions and called for an emergency meeting.  ‘What is happening in Libya’ he declared ‘differs from the aim of imposing a no-fly zone and what we want is the protection of civilians and not the bombardment of more civilians”.  However, his initial criticism was short-lived, and given that the resolution was actually put forth to the UNSC on the behest of the Arab League, Amr Moussa later back-tracked his statements and in a show of coalition unity said ‘we have no conflict with the resolution, especially as it confirms that there is no invasion or occupation of Libyan territory’.
It seems that the leader of the Arab League may have miscalculated the scale and scope of ‘all necessary measures’ awarded to western superpowers under Resolution 1973. Whatever the misjudgment (or hypocrisy), such political rhetoric and double-speak is sure to continue in the coming days as uncertainty looms over Libya.
President Obama is now hiding behind the UK and France saying that he will transfer US’s leading role on Libya ‘within days’. The UK and France claim legitimacy for their military actions on the backing and support of the Arab League. The Arab League divided as ever, is cautiously playing rhetoric and is evidently under the influence of western powers. To keep face with the Muslim population, the west is claiming support from autocratic leaders in the Arab League, whilst the Arab leaders are propped in position and supported in turn by the west.  The old and vicious circle seems to just go round and round.
No doubt that a firm stance must be taken against Colonel Gaddafi whose brutal force has caused death and misery to thousands of people. However the firm stance must not be the wrong stance which goes to substitute a greater evil for evil. The options that could have been explored in Resolution 1973 should have included providing military aids to opposition forces, or even creating an Arab/Muslim military coalition to propel Gaddafi out of Libya.  Western powers are now admitting thatColonel Gaddafi is not a target. If this is the case, what ending is predicted out of this conflict when the country is becoming more polarized and divided? What if Libya is dragged into a long and vicious civil war? Will western military powers support the opposition so they can topple the regime?  Will the backing of the opposition forces not reinforce Gaddafi’s supporters’ view that this conflict is a crusade against Libya helped by home traitors?  How will this lead to a cease fire?
The recent events in Afghanistan and Iraq are clear evidence that western intervention policies such as the enforcement of no fly zones, the sanctions and military actions causes more civilian deaths than it intends to prevent.  More then one million Iraqi civilians have been killed and Iraq is now stricken with sectarian divisions and has become a recruiting ground for Al Qaeda whilst its natural resources are put up for bargain.  The intense political discourse against Colonel Gaddafi, a demonized dictator who developed good relations with western leaders in recent years and bomb shells falling on Tripoli illustrate acute and dangerous resemblance to Iraq.  It may not be Iraq 2003, since an organic and popular uprising is now under way against Gaddafi, but such political manipulation and military interventions shows similarities to Iraq 1991. The Resolution 1973, in effect, allows any (and all) kinds of western intervention bar a full-scale ground invasion. In other words all is allowed, so long as there is no ground invasion. One may ask, what is the difference between a ground invasion and airspace invasion which effectively undermines the sovereignty of a nation? It seems that the Arab leaders with all their naivety (or treachery) have paved the way for the occupation of yet another Muslim country.
Reflecting on the history of such conflicts, it is reasonable to question the motives of the US, and especially that of the UK and France who feel so eager to get involved in this conflict? Do they feel a genuine sense of responsibility to humanity?  Is it a continuation of the colonialist mindset? Or is it a convenient distraction from domestic issues? With reports that Gaddafi’s son helped finance Sarkozy’s last presidential election, Sarkozy may well be tempted to make use of a new Libyan crisis to save him from forthcoming local electoral humiliation.

Whatever the intentions, Muslims have bitterly learnt that actions speak louder than words. The Foreign Office spokesperson in London stated ‘all missions are meticulously planned to ensure every care is taken to avoid civilian casualties’.  What confidence can we gain from such assurances on the accuracy and precision of airstrikes hitting the right targets?  Since the beginning of the Libyan crisis, the US and NATO airstrikes have killed more than one hundred civilians in Afghanistan and Pakistan.  These include (but not limited to):
▪       65 civilians killed in a Nato operation in Kunar province, Afghanistan on February 18, 2011
▪       9 Afgan boys killed by US helicopter gunners when collecting firewood on March 1, 2011
▪       Yar Muhammad Khan, President Hamid Karzai’s cousin, mistakenly killed during a night raid by US Special Forces in Kandahar, March 9, 2011
▪       Two Afgan brothers, aged 11 and 17, killed by NATO helicopters while working on road and field drainage on March 15, 2011
▪       40 killed and seven wounded when missiles fired from American drone aircrafts in North Waziristan killed tribal elders including children and policemen on March 17,  2011
Knowing the brutality and tyranny of Colonel Gaddafi against civilians, how confident can we be that western military actions in Libya will not cause more ‘collateral’ damage or lead to a vicious civil war.
There is much wisdom in the Shariah ruling which prohibits Muslims to seek military assistance from non-Muslims, unless in minor affairs which are supervised under true Muslim leadership. Failing to appreciate this wisdom by Muslim leaders may lead to repeating mistakes in Afghanistan and Iraq.
The law-abiding British Muslims have the capacity to advise the British government to take heed of previous mistakes in Iraq. To continue a foreign policy of intervention in the Arab and Muslim world will only further damage the image of the United Kingdom.  Our country is already involved in Afghanistan, where after 10 years of military involvement our troops continue to be killed and Afghan civilians continue to suffer from war, instability and corruption. The Taliban are as strong and resolute in fighting their fellow countrymen in vicious civil war, simply because foreign troops continue to invade their land on behest of a corrupt government. For Britain to get involved in yet another war on the Muslim world is not only counterproductive but will lead to dire consequences to our British interests at home and overseas.
Notes:
Sources: www.islam21c.com

Islam21c requests all the readers of this article, and others, to share it on your facebook, twitter, and other platforms to further spread our efforts.
Omid Azzizi