Are you ready for our first ever NATIONAL CAMPAIGN?
Home / Analysis / Who is killing the Syrian people? 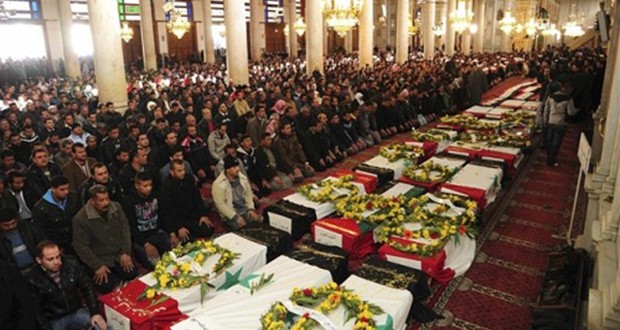 Who is killing the Syrian people?

At least 6000 people have been killed by the Syrian regime within the last 10 months; more than 60,000 people have been thrown in jail or have disappeared. The regime is waging an armed war against its own people and the blood of the innocent, including women, children and the elderly is shed on a daily basis. Tanks and helicopters surround Syrian cities such as Homs, Hama, Daraa and Deir Ezzor. The regimes militia use heavy weaponry and artillery as if they are fighting a force equipped as well as they are. However, all of this has not been enough to convince the Arab League’s observers sent to Syria at the end of December that a major crime is being carried out by the regime against its innocent and unarmed people. On Sunday, the news stated that the Arab ministerial committee on Syria “has decided to give Arab League observers the necessary time to continue their mission according to protocol.” This should be corrected to a script that reads, “The Arab ministerial committee on Syria has decided to give the Syrian regime the time required to continue their butchery and try and stop the revolution at any cost in accordance with the protocol of the Arab dictators who attempt to protect themselves and their tyrannical dictatorships.”

According to al-Jazeera, the first report by Arab League observers in Syria recommends the controversial mission continue and says monitors were subjected to “harassment” by the government and the opposition. It also quoted and Arab League sources saying on Sunday 8th January 2012 that the report recommends “the mission continues its work” with more technological assistance and “calls on the opposition and the government to let the mission move freely.” What absurdity! Those being slaughtered should not cry out and defend themselves but for the sake of the Arab League they should act ‘civilized’ whilst being slaughtered!

Let us remember that the Arab League includes a number of Arab regimes whose own people are revolting against them, and so, why should we expect these regimes to speak against other regimes that are doing the same thing? How can they expose the realities that uncover the disgusting nature of their associates? Would we expect them to support of the freedom of these people which would serve as a precedent for the freedom of their own people? There is clearly a conflict of interest between the Arab league and their mission. A patent example is that is the head of the Arab League mission, General Mohammed Ahmed Mustafa al-Dabi, a former Sudanese military intelligence chief who is himself is the focus of controversy since he is part of a regime that at one point participated in violently cracking down on public protests.

It might be the goodness of Allah’s will that people in Syria free themselves by themselves without international intervention. This gives the revolution in Syria more credibility as well as the security that they decide their own future. We advise our brothers and sisters in Syria to rely on Allah as victory lies with him. Allah says,

O you who believe! If you aid Allah (by following his instructions) He shall aid you (and give you victory), and will make your foothold firm.”[1]

“Allah made it only as glad tidings, and that your hearts be at rest therewith. And there is no victory except from Allah. Verily, Allah is All- Mighty, All-Wise.”[2]

The way many Western Muslims have reacted to the atrocities taking place in Syria is heart breaking and does not reflect a real sense of Islamic brotherhood and what it entails. All of us know the statement of the Prophet where he said, “The Muslim is the brother of another Muslim; he does not betray him, lie to him or forsake him.”[3] Had a small version of this massacre been carried out by a western country, we would have seen Muslims marching and speaking out all over the country. Many of us do not realise that the Syrian regime is far worse than western countries in every way, ideologically as well as humanely. We tacitly take part in this massacre by remaining silent and thus put every possible effort into helping the oppressed in Syria.

A message to the Syrians:

Your revolution should continue and intensify as the end is very near, by the will of Allah. You should be careful of western intervention as they always have their own agenda, one that does not align with yours. It may be the aim of the Arab League to display its failure in dealing with the problem in order to push for the western intervention. Recently, the main concern of Hillary Clinton, the US Secretary of State, was exposed when she met members of Syria’s opposition with a focus on the rights of Syrian minorities such as the Alawites and Christians after the fall of Asad’s regime. You should not repeat the same mistake some of your forefathers committed by preferring to live in humiliation and keeping quiet rather than standing up for a dignified life. Look at the high price you have had to pay for it. Allah will be with you if you are truly believers.

“Truly, Allah defends those who believe. Verily! Allah likes not any treacherous ingrate to Allah.”[4]

You need to be more united and start working on drawing up a road map for yourselves in order to set clear objectives for your journey. Muslims are obliged to help their brothers and sisters in Syria. The Prophet (peace be upon him) said, “aid your brother whether he is an oppressor or the oppressed.”[5]